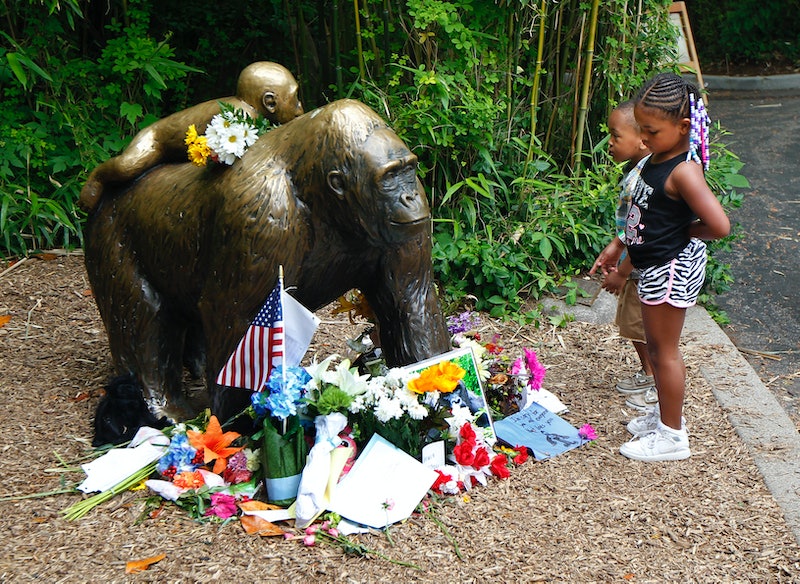 After an incident at the Cincinnati Zoo on May 28, in which a four-year-old boy fell into the Gorilla World habitat, leading to the killing of the gorilla Harambe, many were divided on the issue of whether the zoo should have made that move. Now, three months later, people are still upset about the incident, while others make light of the situation with memes and tweets. But the Cincinnati Zoo is not laughing at the Harambe jokes, and they want you to know it.

As BuzzFeed News reported, every time the Cincinnati Zoo's Twitter account posts anything — literally anything at all — fans of Harambe and trolls of the zoo's decision show up all over their feed. For instance, on Aug. 21, Zoo staff shared a photo of two individuals walking with two flamingos on the Zoo's grounds with the caption, "Watch for our young flamingos walking around the Zoo on your next visit! #birdsareawesome." They were quickly met with trolls posting messages like, "You know what you won't see at the Zoo next time you go home for the weekend? Harambe."

The zoo's social media manager can't share anything to its Twitter account without being bombarded with such messages, and the staff isn't happy with what these trolls do as they grieve the loss of Harambe.

Thane Maynard, the zoo's director, told the Associated Press, "We are not amused by the memes, petitions, and signs about Harambe," according to the Guardian. Maynard added, "Our zoo family is still healing and the constant mention of Harambe makes moving forward more difficult for us. We are honoring Harambe by redoubling our gorilla conservation efforts and encouraging others to join us."

Harambe's death sparked a "Justice for Harambe" movement on social media, but there were plenty of critiques surrounding the incident, specifically the severe racism that the family of the four-year-old faced. Cosmpolitan reported on that response to the incident — namely, a petition that circulated on Change.org that called for Michelle Gregg and Deonne Dickerson, the boy's parents, to "be held accountable for lack of supervision and negligence that caused Harambe to lose his life." The petition also called for Gregg and Dickerson to be investigated by authorities for child negligence, suggesting that the incident at the zoo could be "reflective of the child's home situation," Cosmopolitan added.

Even so, Harambe's supporters are still clearly very upset over the incident, or at least using it as an opportunity to make light of a situation that not only led to the death of a gorilla, but also to serious racial scrutiny of a family who fell victim to the zoo's poorly enclosed exhibit. For the sake of both zoo staff and this family, consider the effects of your trolling.