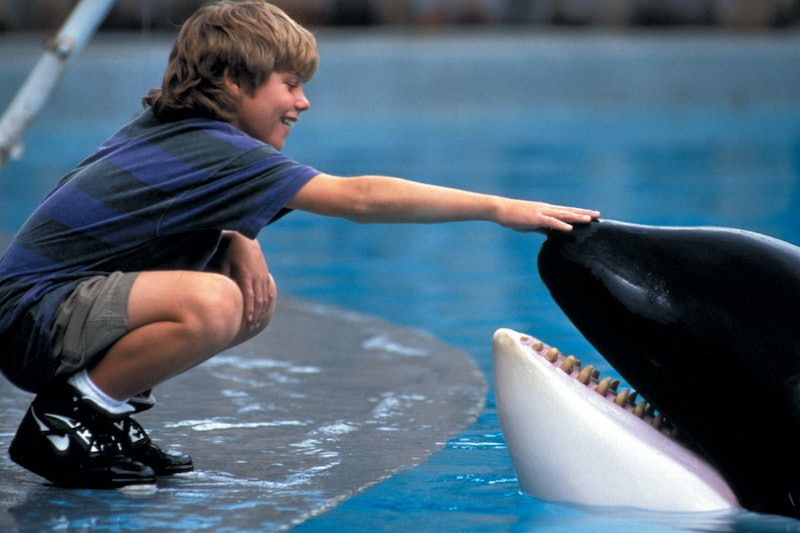 Before I'd decided I'd win an Oscar and after I'd given up my dreams of being a mountain climber, I entertained a brief period of childhood when I swore to anyone who would ask that I would grow up to be a marine biologist. I had no idea what marine biologists did or what they studied in school, but I did figure that a career like that could get me where I wanted to be after I watched the 1993 family drama Free Willy several times: in a tank with a majestic, black and white orca. The feel-good movie takes the classic "boy and his dog" narrative formula and raises it; early '90s Teen Beat coverboy Jason James Richter stars as Jesse, an abandoned boy who befriends a show whale named Willy. Jesse feels trapped and unloved in his foster family, despite their best efforts. And Willy also lashes out against visitors and trainers because he's so frightened and out of his natural element. They're the same, you see. You have to have a cold, black heart not to feel a tug when Willy shows his trust in Jesse.

The human-to-whale soul connection isn't the only appealing factor here. Free Willy has a killer (whale) soundtrack, led by Michael Jackson's gospel-tinged single "Will You Be There?" and featuring tracks by the era's reigning boy band New Kids On The Block and R&B girl group SWV. Quirky Orange Is The New Black star Lori Petty plays a sympathetic trainer who risks her job to save the ailing animal in her care. And then there's that shot — you know the one. Willy is released back out into the ocean. Jesse stands on a rock formation holding his hand up in a farewell gesture. And Willy leaps over him to a swell of the score. Not a dry eye in the house.

But Free Willy has a controversial legacy. The movie raised public awareness of the health affects captivity can have on large mammals like orcas; Keiko, the orca who portrayed Willy, became a poster whale for the cause. In 1995, the International Marine Mammal Project spearheaded the creation of the Free Willy–Keiko Foundation which was also supported by Warner Brothers, the studio that funded the film. Money was raised for Keiko to be transferred from what the IMMP describes "poor conditions in a small tank" in Mexico to a larger aquarium for rehabilitation. Then, he would be returned to the wild, just like in the movie.

The decision to release Keiko has been criticized on the basis of the animal's age and inability to form connections with his own kind. A New Scientist article quotes a study led by Malene Simon of the Greenland Institute of Natural Resources that says, "While we as humans might find it appealing to free a long-term captive animal, the survival and well-being of the animal may be severely impacted in doing so." According to Simon, after his release off the coast of Norway, Keiko showed an inability to find food and integrate with other orcas satisfactorily. He even swam near fishing boats to be close to the humans he recognized. Keiko died of pneumonia only a year after being freed.

Does Keiko's fate cast a shadow over the aquatic majesty of Free Willy? Listen in as Bustle editors dissect both the good and the bad of the movie that drove my brief marine biology obsession in this episode of the '90-centric podcast, Be Kind Rewind.