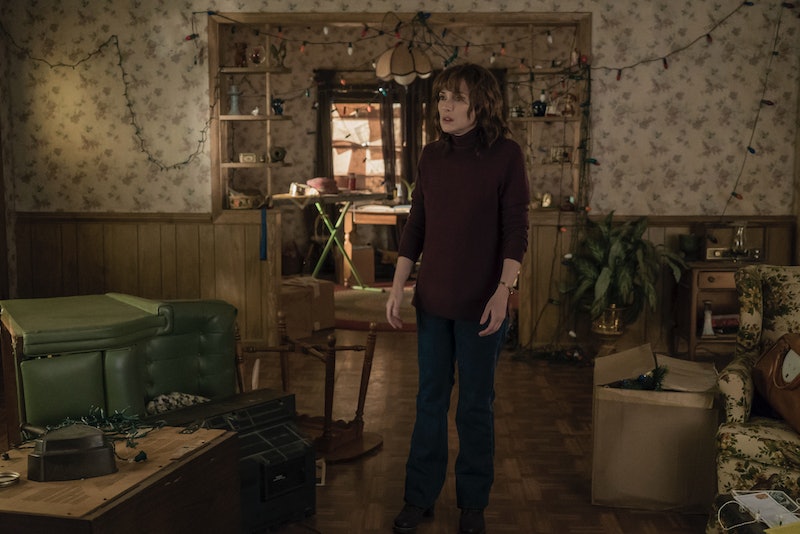 Stranger Things seamlessly integrates references to popular culture in its world-building, creating perfect 1980s nostalgia with every twist. Was casting Winona Ryder in Stranger Things an '80s reference? That wasn't the intention, according to a conference call interview with co-creators Matt and Ross Duffer, as well as director and executive producer Shawn Levy. "We have an amazing casting director, Carmen Cuba," says Matt Duffer, "Her first idea for the show was Winona Ryder. I think we all, us and Shawn, immediately fell in love with that idea."

Joyce's character, who was written as a "tough, cursing, smoking Long Island mom" when the show was originally set in Montauk, became more and more molded to Ryder's on-screen presence. "When you cast Winona," Matt continues, "she has this very distinct, anxious energy about her. David [Harbour, who plays Chief Hopper] described her as like a 'live wire.'"

Though her casting wasn't an '80s reference, she did inspire one of my favorite references in the season, which was intentional, Matt says. "We knew she had a very specific energy and we thought we would lean into that, and that lead us to talking about Richard Dreyfuss' role in Close Encounters ... the idea of 'Winona Versus The World,' we loved that idea."

Just like the Spielberg hero, Joyce is having a very real experience with the paranormal that seems crazy to everyone else, and for most of Stranger Things she's all alone in those experiences.

The idea of "Winona Versus The World," we loved that idea.

Only one script had been written when the roles were cast, so there was plenty of wiggle room. "[The Duffer brothers] are not beholden to their own reading above all else," says Levy. "They will modify the writing to suit the actors, and that is a special skill and why the characters and the performances feel so organic in the show."

According to Ross Duffer, originally Dustin was more of a stereotypical nerd, and Mike was more of a dreamer until they met actors Gaten Matarazzo and Finn Wolfhard, respectively.

"There's all this talk about 'meta-casting,' says Matt, referring to the idea that Ryder herself is an homage to the period, "but really it was us missing seeing her on the big screen."

Not to be a stickler, but Ryder's more memorable roles in Edward Scissorhands and Reality Bites were in the early '90s, not the '80s. Beetlejuice and Heathers were both released in 1988, and only cult hits at the time. So this was not so much of a reference as it was just a good bit of casting that helped create the world of the show.

They did a similar thing with the casting of Harbour, a character actor, sometimes just called a "working actor," who has made a career out of smaller side roles. The Duffer brothers felt that he would crush a leading role if given the opportunity, and they were right.

"We just had a feeling that it was his time," adds Levy. "He took [Chief Hopper] and he made this choice that was simplicity, and about strength, and a depth of pain that he would very rarely show. You'll notice his performance is incredibly controlled. There is a stillness to Hopper that is so strong and so compelling on screen."

The fact that so much of the writing was molded to the actors' strengths, and that Netflix was able to cast who the Duffers wanted like magical fairy godparents, is why audiences fell in love with these characters so easily. It's no wonder that Stranger Things is all anybody can talk about this summer. There have only been eight episodes, and these people feel so real. Now that Joyce has Hopper, Jonathan, and Nancy on her side and isn't "versus the world," anymore, Stranger Things Season 2 is sure to take some interesting turns.