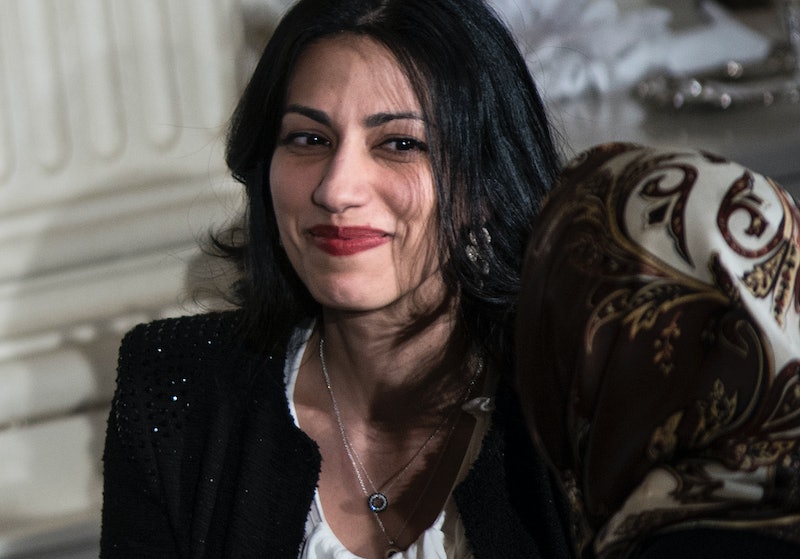 On Monday, conservative watchdog organization Judicial Watch released a new batch of emails from Hillary Clinton's time in the state department, including several emails sent by Huma Abedin, one of Clinton's top aides. You can read them here — but given that the document dump weighs in at over 700 pages, you might not want to. So, what do the Abedin emails actually reveal?

Not all that much. The emails basically suggest that a couple of people who'd given a lot of money to the Clinton Foundation tried to get preferential access to Clinton herself when she was Secretary of State. Sometimes these attempts succeeded, but they often did not. As Clinton's deputy chief of staff at the time, Abedin was involved in fielding these requests.

Take Crown Prince Salman of Bahrain. Salman, whose scholarship fund donated $32 million to the Clinton Foundation between 2005 and 2010, had requested a meeting with Clinton in 2009 through "normal channels," according to the emails, and was denied. Doug Band, a top executive at the Foundation, emailed Abedin to see if she could help, and within two days, a meeting was set up between Salman and Clinton, the email correspondence suggested.

In another instance, Maureen White — both a Clinton Foundation donor and fundraiser for the Democratic Party — asked Abedin if she could set up a meeting with Clinton while White was in Washington D.C., Abedin said she'd "make it work."

See anything salacious in there? Neither do I. The most damning interpretation is that a couple of donors to the Clinton Foundation had an easier time getting meetings with Clinton than they might have otherwise. What's unclear is whether this actually caused any harm to the State Department, national security, the country on the whole, America's allies or, umm, anybody. The end result of these communications, the big reveal, is that Clinton had some meetings with donors.

There was one exchange that edged a bit closer to being incriminating, yet was not. Acting on behalf of Foundation donor Casey Wasserman, Band asked Abedin if Clinton could help acquire a travel visa for an English football player who allegedly had an (unspecified) criminal record, so the player could go to a party in Las Vegas. Abedin replied that it "makes me nervous to get involved but I'll ask." This led Band to reply "then don't." The matter was apparently dropped.

Had Abedin or Clinton actually procured this visa, that would be a scandal, albeit a minor one. But they didn't. In fact, it doesn't look as if Abedin even attempted to take any action with regard to a visa. Ultimately, the only thing this email shows is that a Clinton donor tried and failed to get a visa through her connections to Clinton.

In several instances, Clinton Foundation donors asked Abedin for meetings with Clinton, and Abedin either replied noncommittally or didn't reply at all.

Judicial Watch, among other Republicans, claimed the emails suggest that Abedin gave donors "special access" or somehow granted them favors, contributing to concerns over a possible connection between the Foundation and the State Department. In response to those concerns, Clinton spokesman Josh Schwerin told POLITICO, "No matter how this group tries to mischaracterize these documents, the fact remains that Hillary Clinton never took action as Secretary of State because of donations to the Clinton Foundation." And there you have it. All in all, the email correspondences themselves don't seem to prove any wrongdoing.