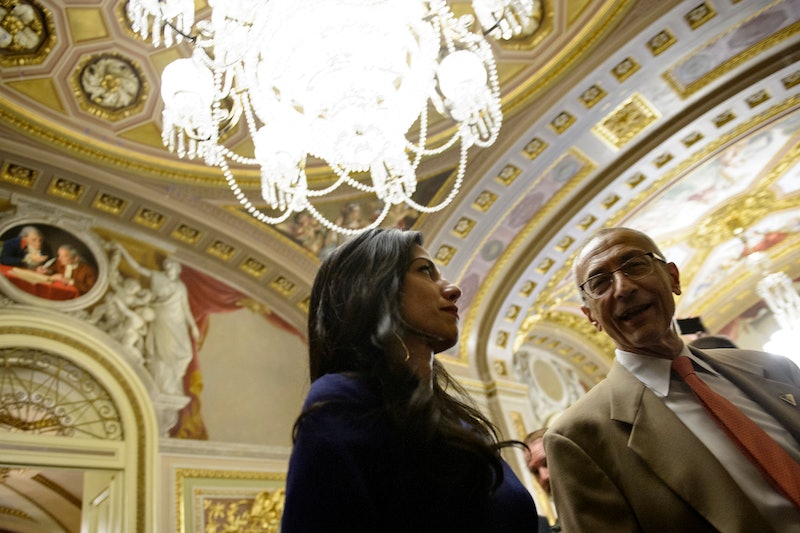 Huma Abedin, the former State Department staffer and longtime aide and friend of Hillary Clinton, hit the headlines this week in regard to her role at the State Department, her relationship to the Clintons and, unfortunately, for her connections to an academic journal on Muslims in the West, re-dubbed "a Radical Muslim journal." On the one hand, the case is concerning — the claim that Clinton Foundation donors seemed more likely to access Clinton during her tenure as Secretary of State, for example. On the other, the Islamophobic attacks against Abedin (and, by extension, Clinton) are downright disgusting. One can criticize Huma Abedin without being Islamophobic, but apparently some people just can't bring themselves to not regurgitate bigotry.

Sometimes, in media theory classes, journalism students might learn about a classic theory of communication known as "agenda-setting theory." The theory is based on the idea that if media outlets choose to report heavily on a subject, then the public will consider the issue important. The 2016 election cycle is nothing if not a study of agenda-setting in action, and this time, the fact that Abedin was an assistant editor for the Journal of Muslim Minority Affairs (her mother Saleha Abedin is the editor-in-chief) is being seized on with gusto.

However, instead of naming the publication, media outlets like The Daily Caller, The Blaze and Breitbart are saying that Abedin was an editor at a "radical Muslim journal".

There are very real concerns hidden in the Islamophobia-rife coverage of Abedin, not the least of which being that she once secured a visit between Clinton and the Crown Prince of Bahrain when "normal channels" were exhausted, POLITICO reports. The critical coverage of Abedin implies that her role as a friend of the Clintons and a former Clinton Foundation staffer meant she worked with big-spending Clinton Foundation donors as a go-between in regard to access to Clinton while she was Secretary of State, according to the emails released by Judicial Watch. This, along with speculation surrounding the relationship between the Clinton Foundation and the State Department during Clinton's time as Secretary of State, is important to talk about, and we as political spectators can and should hold those in power accountable when necessary.

But to frame the conversation in ways that focus on Abedin's Pakistani heritage and Muslim religion exemplifies a subset of agenda-setting known as "framing theory", which focuses on how an issue is covered rather than merely the issue at hand. To even discuss in depth Abedin's role at the Journal of Muslim Minority Affairs — a publication that's nothing more than a sociological journal published by Muslims in the U.K. that offers controversial beliefs about the West's relationship to Islam — is to frame the agenda in favor of the bigotry and xenophobia of the right-wing crowd; to call that same journal a "radical Muslim journal" is to turn the bigotry up to full volume.

As a Muslim-American, I won't pretend that I'm not critical of the conservative tone of the Journal of Muslim Minority Affairs. But to blast Abedin's ties to conservatism without pointing that spotlight back on those who are preparing her funeral pyre is the political equivalent of playground adage "those who smelt it dealt it." The purpose of the hyper-focus on Abedin's role within the journal, her family, and her alleged "radical" beliefs is obvious when looking at the responses to the two tweets above: some people want Clinton to be inextricably linked to a "terrorist."

There isn't a single person in Washington or Park Avenue who doesn't have skeletons in their closets or embarrassing connections, and the scandals that some who aim to hold office have been a part of make Abedin's conservative former employer seem like small game.

More like this
How A Political Staffer’s Death Became The Center Of Alt-Right Conspiracy Theories
By Gretchen Smail
16 Novels That Paint A Realistic Portrait Of Abortion
By K.W. Colyard
Lauren Rae Is Bringing Back The Sex And The City Vibes In Her New Memoir
By Shahed Ezaydi
Annie Lord’s Memoir Will Make You Believe In Love Again
By Shahed Ezaydi
Get Even More From Bustle — Sign Up For The Newsletter