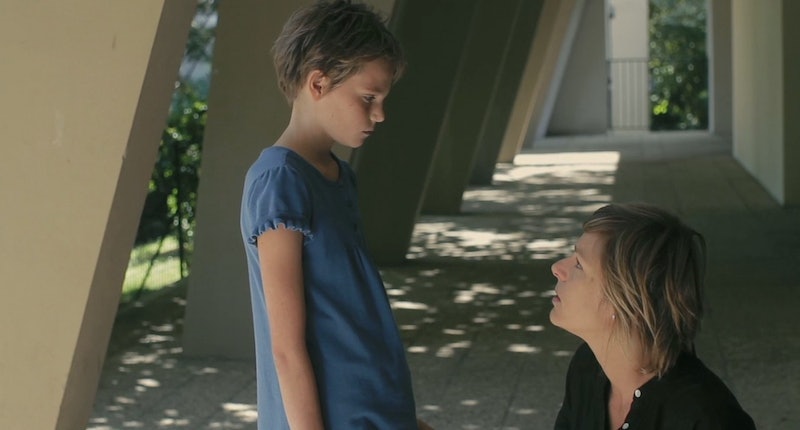 The word "tomboy" doesn't get tossed around with regularity any more. Like Leave It To Beaver or four-hour drinking lunches at work, it's got a little bit of the aura of a bygone age about it. But the word is still a recognizable one, and small girls who resolutely resist any attempt to get them into skirts and vastly prefer baseball and tree-climbing are still likely to have it pasted on their foreheads. So what's the problem with calling a little girl a tomboy? Shouldn't we be embracing the strong, bandaged-knees, doll-hating tomboy girl as a feminist icon? Or is the issue a much deeper one, about what it means to be a girl at all?

It's tempting to celebrate tomboyishness. After all, it represents a "different" kind of way to be a little girl: fight with the boys, enjoy rough and tumble, ignore scrapes and bruises, and generally reject delicacy, politeness, and demureness for a wilder existence. Who doesn't love gender rebellion? But the issues with tomboyishness as a concept run very deep, back hundreds of years, and through the many iterations of the concept in media and literature; and what you discover, when you explore a little further, is that the tomboy isn't a throwing-off of gender norms but in some ways an entrenchment of them. In essence, girls should be allowed to do whatever they damn well want, and the tomboy concept doesn't help to move that forward.

Here are the problems with the whole idea of the tomboy and why you should think twice before you lightly use it to describe a friend's kid as she makes her own treehouse or beats every boy on the block in a sprint.

The Origins Of The Word Are Problematic

The issues with tomboy-ness can be traced back to its etymology, and the unusual fact that, originally, it wasn't about girls at all. The term first emerged in the 1550s in England, for a "rude, boisterous boy": in other words, for a boy who acted outside the realms of normal politeness. The "tom" in this is the same as "tomfoolery," and indicates the same kind of (at the time, usually masculine) behavior: the tomboy of the 1550s would be that annoying kid with no table manners, running around after your chickens and picking fights in the street. But then, within thirty years, it evolved, to mean "strumpet, bold or immodest woman". This wasn't about wearing trousers instead of skirts; this was severe societal disapproval.

"Tomboy" only really began to be used as applicable to younger women and girls at the end of the 16th century, but the word itself is a centuries-old way of policing women's behavior — and note that, at the time, it was definitely for adult women, not just for little girls. (Interestingly, they had their own unique term: tomrig.) What can be seen as a benign description of a girl who hates dolls is actually a softened term for one of the worst kinds of women in society: the one who was outrageous, sexually licentious, rude, and didn't know "her place". It wasn't necessarily about acting like a man; it was about not acting like a proper woman, and being mocked for it.

The concept of the tomboy in American and English entertainment really blossomed in the post-war '40s and '50s as something both benign and a bit odd; there's a 1950s short film, Cindy Attends A Party, in which a tomboy girl is taught proper party etiquette by a "fairy godmother". Children's writer Enid Blyton in particular used her tomboy characters as demonstrations of wildness and a weird kind of animal impulsivity, in stark contrast to refined young ladies (one, in the Malory Towers series, goes by the name of Bill rather than her given name Wilhemina, and manifests her tomboyish nature through many brothers and a love of horses). Tomboys saw a brief vogue in the 1920s (flappers like Clara Bow were also called tomboys, with shades of the old "strumpet" label), but Katharine Hepburn's insistence on wearing trousers rather than skirts shocked 1950s Hollywood; (Hepburn actually shaved her own head as a nine-year-old and ran around in boy's clothes, a typical example of the "tomboy type"). The trope of tomboy-transformed-into-pretty-girl was a staple of '90s comedies. We often like to see the tomboy feminized, flattened out, emotionally vulnerable, and generally made "acceptable".

The tomboy doesn't necessarily carry negative associations these days (though an upcoming film called Tomboy with Sigourney Weaver, in which an assassin is "turned into a woman" by a rogue doctor and seeks revenge, might raise a good argument against that). But it definitely marks out a boundary: here is what a normal girl is like, and here is a tomboy. And that separation does nobody any good, even if it's meant to be positive. "Being a girl" means whatever the girl herself wants it to mean, regardless of their choices of sneakers or lace.

The idea of tomboyishness has always had a relationship with queerness. Michelle Ann Abate points out in her Tomboys: A Literary & Cultural History that tomboyishness has historically had a distinct tie to the concept of "butchness" in LGBTQ communities, and that policing tomboy girls can be a way of worrying about their sexuality as well as their gender roles. Any girl who's been informed by a relative that their short hair as a child or young teen means they "look like a lesbian," as if that's a bad thing, will recognize this anxiety.

Not only is it one of the earliest ways in a girl's life in which her gender behavior can be criticized or labelled for being "insufficiently" feminine, but it's a vast oversimplification: a girl who likes to play at "boy" things must want to "be a boy," and therefore actually be a lesbian! Genius! (It's worth noting that this supremely stupid logic is also used the other way, for boys who like to do "girl" things, though there's not even a designated word for that in polite society. That lack implies that it's seen as an even greater transgression than tomboyishness.)

And calling somebody a "tomboy" is particularly problematic in this age of increasing transgender rights and visibility, and of understandings of agendered and fluid-gendered identities. "Tomboy" puts people in a category that restricts and aligns gender in a stringent, historical way — and it also assumes that the person you're calling a tomboy does, in fact, identify as a girl. It complicates the issue for people struggling to find their gender identity, as the many conversation threads from confused young people labelled "trans or just a tomboy?" across the Internet attest. It's an outdated word that no longer matches how we understand bodies, gender roles, sexuality, or gender. Four strikes; you're out.

It Diminishes The Power Of Girls

In a New York Times look at the tomboy concept in 2015 entitled, somewhat tongue-in-cheek, "Where Have All The Tomboys Gone?", one expert declares that “Tomboy doesn’t feel present tense to me at all. It feels retro, this affirmative way of talking about a girl who likes boy things, as if boy things were better.” The problem, of course, is that as a way of thinking, that is anything but retro. As we move towards more acceptance of wide, less proscribed gender roles, where a girl is entirely capable of containing multitudes (sneakers and lace and dolls and baseball), the word is beginning to lose its power. And frankly, that seems like an excellent idea.

The Rio Olympics of 2016 demonstrated, pretty categorically, that "throwing like a girl" or "running like a girl" are not valid insults, and that the female body, even in girlhood, is perfectly capable of huge excellence. But, despite the fact that this proof has been provided at every Olympics in the modern era, there's still a clear societal urge to designate athleticism, aggression, power, freedom, and confidence as male, and express surprise and pleasure (or disapproval) when women revel in them.

The word tomboy, even if it's praise, carries a lot of baggage about proper feminine behavior, sexuality, and what it means to be a girl, and is unique in that it's applied to children — (I've heard babies described as tomboys because they punched another baby at playgroup). We're redrawing the lines on gender limits, our understanding of sexuality and the ways in which we define ourselves, and that means the tomboy, like the prude or the jezebel, needs to be consigned to the dust-heap. Don't tell a little girl or boy what they are. Let them figure it out for their own damn self.