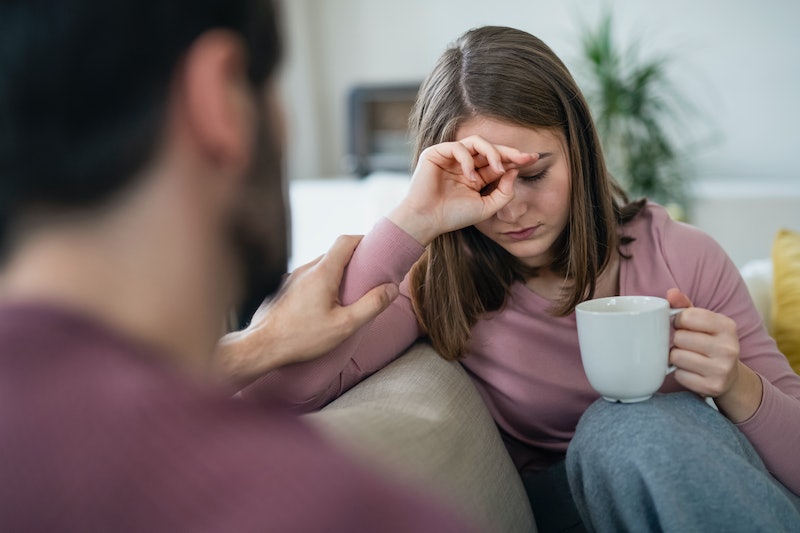 Want to get into a relationship with somebody who has toxic parents? The worst part will likely not be Thanksgiving (though let's make no mistake, that may not be a picnic, either); rather, it will be the fact that the lessons that kids from toxic households carry with them into adulthood can have severe negative effects on their ability to maintain healthy, trusting relationships. This is because their experiences of love, stability, trust and emotions have neither been sensible nor particularly fun. For better or worse, our parents do a lot of the preparation for our later relationship behaviors, particularly when we're young and lack other experience. And adult children of toxic parents take lessons with them that are, consciously or not, often extremely bad news.

This is not to say that, if you should meet a person's insane, bullying, controlling parents, you should then turn tail and run away in fear that they will also be like that. Many children of toxic parents — particularly if they're aware of their parents' behavior and just how awful it is — are attempting to make better choices, break the cycle of toxic parenting (a lot of toxic parents had toxic parents themselves, and so on), and treat their partners in healthy, loving ways.

But it's important to note that they'll have challenges, and in seven particular areas, the issues may be more visible than elsewhere. Every child of a toxic parent is different, but here are some difficulties that many of us have faced when it comes to romantic love.

1. A Tendency To Repeat Familiar Patterns

The problem with toxic parents, regardless of their particular form — whether they're aggressive, neglectful, narcissistic, drug-abusing, guilt-tripping, suffocating, or some other type — is that, as parents, they are our most dominant models of behavior from a young age, and consequently can leave a deep impression on us, which can create a tendency to seek out the same patterns of relationship.

Some kids of toxic parents are lucky; they see a potential romantic partner who works and thinks in the same way as a parent, recognize the danger, and stay away. But others, often unconsciously, tie those toxic behaviors to their childhood notion of love; and, as a psychological expert told CNN, it can be a chance for them to attempt to "make amends for an unhappy childhood," by carving out a successful adult relationship with somebody who resembles an incapable or ineffective parent. Many children of toxic parents feel substantial guilt about why they were unable to "make their parents love them" in a proper way, and that can get them caught in relationships where they enact the same problems and try to fix them.

This is a particular issue for children of narcissistic parents, for whom love is always "conditional love," based on how the child reflects and reinforce's the parent's self-value. But it happens in other toxic situations in which love is offered with strings attached, and we now know that those behaviors in parents have long-term consequences; a series of studies published in the New York Times found that children for whom parental affection depended on success, academic or otherwise, tended to be unable to appreciate their own worth, and have seriously complicated relationships with their parents. It also wreaked havoc on their relationships with their own children, whom they often tended to treat "conditionally."

If that's the only experience of love that you have, it can be utterly confusing — and a little bit threatening — to have a partner who claims to love you regardless of what you do or achieve (even if that's how you feel about them). What's the point? What are they getting out of it? Adult children in this situation can regard expressions of unconditional affection as suspicious and odd.

A sense of essential self, and of one's own inherent worth, are necessary to a successful relationship; but sometimes, children of toxic parents have a tough time maintaining that. As I've written before, Susan Forward, author of seminal text Toxic Parents, highlights that a sense of self is often a strange concept to adults of toxic parents. And beyond self-knowledge, there's also self-value; what you're worth, and what you therefore should and shouldn't put up with. If a toxic parent spent their kid's childhood informing them that they were worthless, or that their worth depended on specific conditions (which may not have been clear, and might have changed from day to day), that kid will obviously find it hard in adulthood to have a solid sense of their own definite value in the world.

This is, again, particularly the case with children of narcissistic parents; Dr. Seth Meyers at Psychology Today explains that they tend to find dramatic and emotionally unstable partners. "Because they didn’t grow up with the belief that they were intrinsically okay and good," he says, "it makes perfect sense that these individuals would gravitate toward stormy romantic partners later."

The concept of boundaries, those lines we draw about acceptable behavior and treatment, and enforce when people cross them, tends to be severely eroded in households with toxic parents, purely because children often have very little power to stop what is unacceptable from happening to them. (Not their fault. They're children.)

As people in this situation grow up, establishing healthy boundaries — where they tell a person who's misbehaving/throwing a guilt trip/having a tantrum/acting in an unacceptable ways that they are being unacceptable — has to become a conscious, learned thing. An expert at Aging Care, writing about dealing with aging toxic parents, calls it "detaching with love:" "you affirm that you love the person, but will no longer tolerate being treated with meanness or disrespect." A child of toxic parents may find it incredibly hard to articulate or reinforce their feelings about things they don't like in their partners.

5. Inability To Trust Their Partner

A household with toxic parents is, by and large, not a very stable or constant household; and if there are things that are constant, they're likely to be negative. A parent may be volatile, or their neglect or disapproval may be persistent. Neither are good foundations for creating a person who, as an adult, can trust their partner to stick around and not curse them out/ break a lamp/ behave like an idiot. These patterns are hard to shake; one study found that one third of seriously abused children would go on to repeat the same abuse patterns as adults.

Kids in toxic situations, as Gabrielle Moss wrote for Bustle last year, have substantially different experiences of trust and bonding with those close to them — often very confusing and destabilizing ones. If you come from an environment where loved ones are very likely to act in upsetting ways, it's difficult to shake the sensation that lovers will do the same thing, because that's "how it's supposed to work."

6. Dealing With Anger Or Volatility In Unhealthy Ways

Anger isn't a necessary part of a toxic household. But it certainly doesn't help. In healthy households, children are allowed to argue, parents are allowed to disagree, and everybody understands that this is OK and that people can fight and still love and respect each other. In toxic ones, this understanding often isn't there; parents can lash out at kids, or children aren't allowed to feel as if their own emotions are safe to express. And that can mean that anger and criticism, which are natural parts of a relationship (we get annoyed at one another! we make mistakes), are extremely weird for kids from those situations. Danielle Campoamour at Romper makes the point that some children of toxic parents are actually excellent at arguing as adults, because they've taken on board what not to do; but unfortunately, that's not a universal. A study from 2006 found that kids from abusive households tended to associate people who looked or acted like their parents with "implicit threat" as adults, even if there wasn't anything to indicate that to anybody else. Threat, anxiety and an understanding of anger as an extremely dangerous thing can really hamstring your ability to have a good fight about the dishwasher.

This may seem like a fairly far-fetched one, but it's backed up by psychological research. It turns out, according to a 2012 study published in the Journal of Social and Clinical Psychology, that adult children of toxic parents (who'd suffered "emotional maltreatment," in the words of the researchers) had one big obstacle standing in the way of their romantic happiness: their tendency to self-criticize.

When I talk about self-criticism, I don't mean a little light self-castigation; I mean that children who have been brought up to think that they are in some way failing, bad, or forced to chase after love have a tendency to wound themselves in extraordinary ways. Psych Central points out that an incredibly punishing inner voice is one of the key ways in which depression manifests; and relationships between two people will, inevitably, involve missteps, misunderstandings, difficulties and the natural miscommunications that happen as humans attempt to interact. Children of toxic parents, though, find that seriously hard to deal with; one little difficulty and they spiral into self-condemnation, which a partner can find terrifying or frustrating.