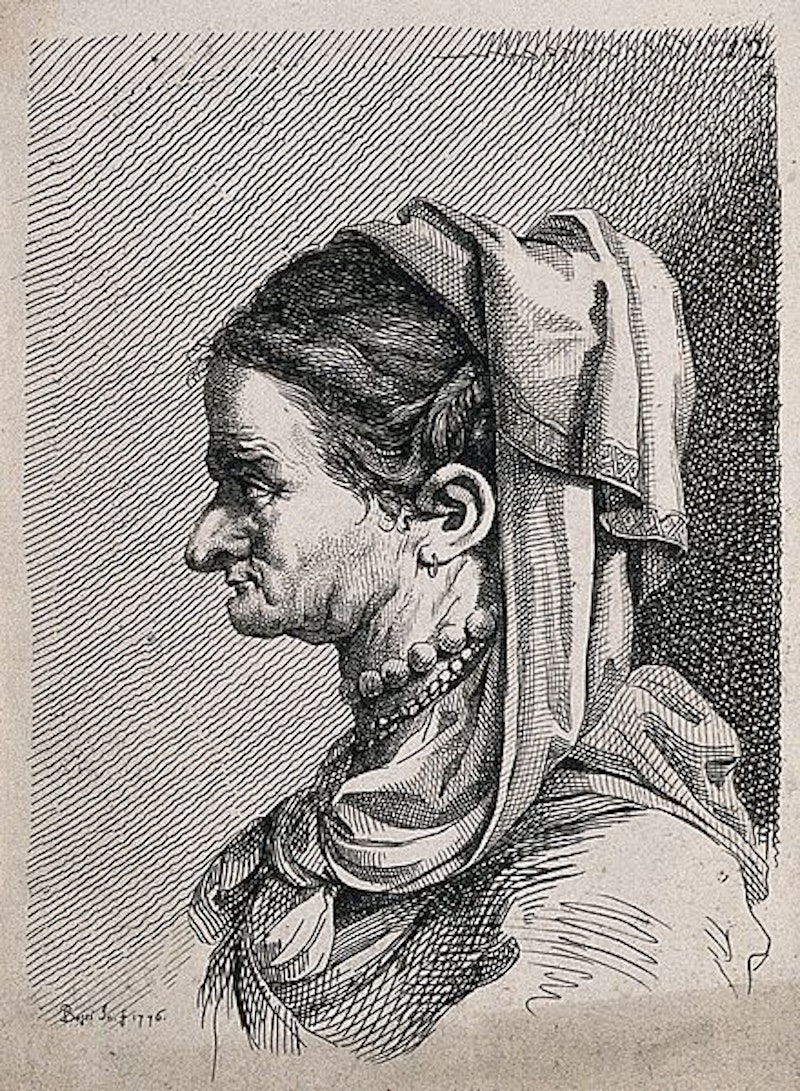 Historically, elderly women have not had a particularly easy time of it. Anybody who knows a little bit about the witch trials of the medieval period knows older women were most likely to be accused of witchcraft (because ladies living on their own with a bit of folk medical knowledge were likely worshipping the devil, am I right?); but they've also been major folkloric, artistic and literary figures in many civilizations...and many of those depictions were, um, not so flattering. Throughout history, many alleged that old women could (and would!) eat your entrails, torture your babies, kill you with their eyes (because of their lack of menstruation, obviously) or just create havoc in your community by chasing after eligible young dudes. It's largely a societal reflection of concern, worry and fear about women of a certain age: they couldn't bear children any more, and they were too old to give a sh*t. And there's nothing more terrifying — to any civilization, from the ancient Egyptians to the medieval Germans — than a woman who doesn't give a sh*t.

Even today, Western society is still not entirely sure what to "do" with elderly ladies. The hit show Grace & Frankie, starring Jane Fonda and Lily Tomlin, is one of the most unusual cultural productions of the 2010s, because it focuses exclusively on the feelings, thoughts and experiences of women over 60. They're not supporting characters, moralizing fairy godmothers, terrifying grandparents, or played-for-laughs out-of-touch baby boomers (though the idea of elderly ladies as embarrassing and hilarious, as we'll see, dates back to the entertainment of the ancient Greeks).

After a certain age, women just disappear from (or rather, are forced off) the cultural radar. And, as this article will show, that's not exactly a new phenomenon. Our inability to deal effectively with grandmothers and women who've (shock!) shown signs of aging is, as it turns out, thousands of years old; let's take a journey into just how weird it's been.

1. They Didn't Exist In Egypt (Except As Prisoners Of War)

This is an interesting feature of life in ancient Egypt: you very, very rarely see representations of old women in their art. We're not entirely sure why, but some scholars think that women's age wasn't seen as a good thing in the culture; while men, particularly kings and priests, were allowed to be represented as sages and wise old dudes in images, women were generally always depicted as young and beautiful, even when the women being represented must have been ancient in real life. But there was one exception: prisoners of war.

Scholars have noticed that when elderly women do show up in the art of the ancient Egyptians, they're female captives, prisoners of war represented as part of the spoils of a battle or victory. Ladies of other countries were considered, as Deborah Sweeney writes, "of low social standing and might well be equated with servants; indeed, that was often their fate." They were depicted as aged — often to the point of caricature — to show off how strong and lovely the Egyptians were in contrast. Life as an ancient Egyptian prisoner of war: the most undignified Instagram filter.

2. They Could Turn Themselves Into Flesh-Eating Birds

For some civilizations, the supernatural aspects of elderly women weren't necessarily considered threatening. Ancient Chinese folklore contains the concept of the gui po , a ghost that takes the form of a friendly old woman, usually the spirit of a servant, who returns to the house of her masters to continue helping out with domestic work and raising the kids. (Evil gui po exist too, in case you're getting too into the warm and fuzzies.) But the ancient Greeks were not sentimental about them. At all.

One of the most bizarrely terrifying features of Greek and Roman mythology was the strix or strigae, a bird of "ill omen" (usually an owl) that was, in some tales, alleged to be an elderly women in flying form. These birds weren't exactly benevolent presences; they specialized in torturing newborn babies by physically attacking them in their cradles, and the author Ovid mentions in his Metamorphoses that they could only placated with the entrails of a sow.

3. They Were Deeply Immoral And Loved Young Men

The Romans, it seems, viewed old women as either completely terrifying or absolutely hilarious. Numerous scholars have pointed out that that the old woman shows up in a lot of ancient Roman comedy as a kind of figure similar to Samantha in Sex & The City, constantly chasing after young men. (Which, to me, sounds like an ideal and acceptable lifestyle for one's golden years — but the Roman audiences were having none of it.)

Tim Perkin, in Old Age In The Roman World, explains that the old woman figure in literature of the period was completely repulsive and outrageous, calling them "disgusting, haggard, toothless, and sex-crazed." He also points out that this wasn't just limited to literary figures; a Greek ancient papyrus apparently includes a spell to make an elderly woman give up her "excessive gossiping and drinking," which seems like a rather cruel way of taking away her fun.

4. Their Lack Of Periods Meant They Were Probably Insane

This idea arose in medieval Europe, and to understand it, you have to look at the way in which people of that era viewed health, and the purpose of periods in particular. Humoral theory — in which bodily health and character were determined by the balance of the four "humors" (blood, black bile, yellow bile and phlegm) in the body — was the dominant medical thinking at the time. And when women stopped menstruating as they aged, they allegedly left themselves open to massive mental difficulties.

Andrew McCarthy, in Staging The Superstitions of Early Modern Europe, explains that "the symptoms of post-menopause became conflated with medical descriptions of female illnesses, such as hysteria and melancholy." According to the medical laws of the time, menstruation was a way for the female body to correct its balance of humors, but as it was naturally "colder" than the hot, dry male body, it was more inclined towards melancholy (a very early understanding of depression). Without the correcting influence of a period, people believed that melancholy became even more likely. Old women, it seems, were basically seen as much more likely to get extremely sad, or even take leave of their senses; it's been argued that Lady Macbeth's eventual descent into insanity may have had something to do with her age.

5. They Could Kill Children With Their Eyes

You might think it was a better option for early modern and medieval elderly women to be the rare people who kept menstruating into old age; but actually, this was even worse for them. The medical treatise De secretis mulerium, or "The Secrets Of Women," which was intended to give medieval monks a vague idea of how reproduction and the female body worked, is pretty clear that elderly menstruating ladies were physically lethal: "if old women who still have their periods, and certain others who do not have them regularly, look at children lying in the cradle," it says, "they transmit to them venom through their glance."

Even if they weren't having periods, though, their gaze was still seen as dangerous as hell. In Celtic tradition, it was believed that when a child fell sick, odds were high that that the gaze of an elderly woman, menstruating or not, had "ill-wished" them with the evil eye. And humoral theory in the Renaissance meant that people believed the cessation of menstruation could cause a kind of toxic buildup in elderly ladies' bodies, making them some kind of radioactive disease-vector that shouldn't be invited to parties.

6. Their Elderly Illnesses Were A Foretaste Of Hell

For the medieval people of Anglo-Saxon Christian Europe, the concept of sympathy for the ailments of age — creaking joints, bad memories, poor teeth — wasn't really a thing. Why? Because all the suffering you were meant to accumulate in your old age was designed to be a punishment for the sins you'd committed as a fresh young thing, and happened precisely to give you a little taster of what it would be like in hell. Yep.

"In old age," Rasma Lazda-Cazers writes in Old Age In The Middle Ages , "one has to fear the fires of hell due to the decadent side of the world and life lived without restraint;" even if old people of either gender were seen as "wise" or spiritually superior, they were still getting closer to their eternal judgement. A new study of sources from the University of Leiden in the Netherlands has found that a lot of medieval writers thought all the indignity, illness and general ugliness of old age was basically the closest thing to hell you could get on earth, a kind of precursor to being tormented by the Devil.

7. They Might Bring You Gifts (Or Slit Your Stomach Open)

The regions around Germany and the Tyrol appear to have had a very mixed relationship with old women throughout their folkloric traditions. It remains a superstition in the area that walking between two old women on a road is hideously bad luck; but their attitude towards mythic elderly ladies is really summed up in their pre-Christian goddess, a figure called Perchta.

Perchta, according to the folkloric tradition (she's mentioned by the Brothers Grimm), presents as an old woman, occasionally with a swan's foot. She's a very threatening version of Santa; on the twelve days between Christmas and Epiphany, she'd roam around making sure people were behaving themselves, particularly children and young women. If they were, they'd get a small silver coin; if they weren't, she'd cut their bellies open, remove the entrails, and stuff them with straw and rocks. As far as a bogeyman goes, there's basically nothing more terrifying.