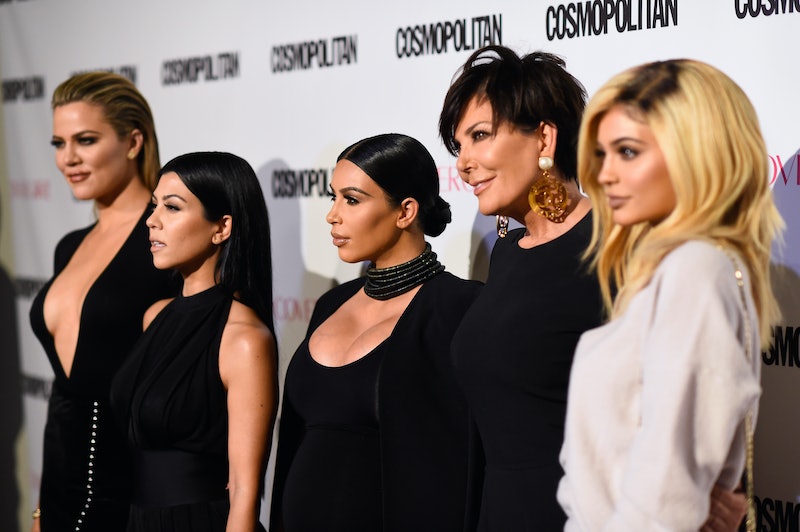 Instagram has always been my favorite form of social media — mostly because I actually like seeing photos of everyone's dog and/or breakfast — but the way the app is used has been changing lately, and a lot of that has to do with ads. If you check it as often as I do, chances are you've noticed some of the celebs you follow pushing their "favorite" skinny teas and teeth whitening systems on a near daily basis. If you have enough online clout (read: thousands or even millions of followers), promoting products on Instagram can actually be pretty lucrative. But what about the less obvious version of these ads? The Kardashians and Jenners are being accused of breaking advertising rules on Instagram, and it could lead to legal trouble for them.

Bustle has reached out to a rep for the Kardashian/Jenner family for comment, but has not yet received a response.

The organization Truth In Advertising (TINA) has written a letter to the family, alleging that in several recent posts from Kendall and Kylie Jenner, and Khloé, Kourtney, and Kim Kardashian that seem to be promoting products, they didn't disclose that the posts were ads. And if the posts are ads, not disclosing this on Instagram is against the Federal Trade Commission's guidelines for endorsements. A press release from TINA alleges that, between the sisters, there are over 100 posts that are actually ads without being labeled as such. The organization gave them a week to fix the allegedly problematic posts before they will contact the FTC.

"When it comes to sponsored social media posts, the law is clear — unless it’s self-evident that an Instagram post is an advertisement, a clear and prominent disclosure is required so that consumers understand that what they are viewing is an ad. The Kardashian/Jenner family and the companies that have a commercial relationship with them have ignored this law for far too long, and it’s time that they were held accountable."

According to the FTC, social media endorsement disclosures must be "clear and conspicuous" and suggests the hashtag "#ad" be used if the post is actually paid.

So why does it matter? Other than needing to keep these endorsements in line with legal guidelines, it's obvious that a lot of people look up to the Kardashians and Jenners, and so many of their fans are young. It's important for them, or anyone else with a major platform, to distinguish between the products they actually use and love and the ones they're simply paid to rave about, especially when it comes to products like weight loss teas.

We can probably all agree that Instagram ads can get annoying, but it doesn't seem like they're going anywhere anytime soon. Maybe the next best thing is regulating them better? And if the Kardashians can set a good example, I have a feeling getting everyone else in line will be a piece of cake.