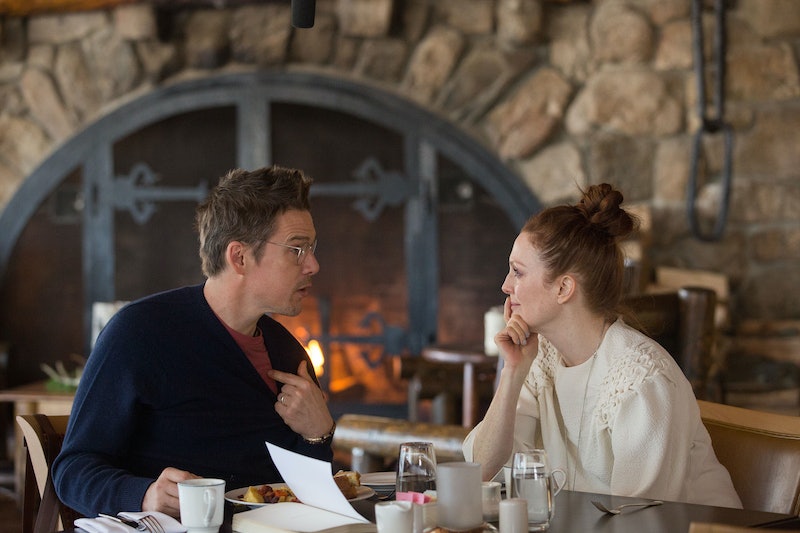 Greta Gerwig is known for her collaborative film projects, and the dramedy Maggie's Plan finds her teaming up with director Rebecca Miller and several A-list costars. The movie, which hit theaters in May and comes to Blu-ray, DVD and digital on Aug. 23, revolves around a young New York woman named Maggie who falls for a married man, gets together with him, falls out of love with him, and then tries to arrange a reunion between him and his now ex-wife. The story is further complicated by the fact that when Maggie first meets her beau-to-be, she is already in the process of trying to get pregnant via artificial insemination. Yikes.

Julianne Moore, Ethan Hawke, Travis Fimmel, Bill Hader, Maya Rudolph, and Wallace Shawn all appear in the film, and with the home release occurring, it's the perfect time to catch up with the complex storyline and learn more about the project. In the exclusive behind-the-scenes clip below, several of the cast members speak about the process of creating Maggie's Plan, with Gerwig reflecting that, even though she didn't write the film, her involvement in developing the character felt comparable to other projects that she penned herself. Hawke expresses a similar level of enthusiasm for the movie, saying that it was an amazing opportunity to work with Gerwig.

Yet both actors also offer high praise for one costar in particular: Moore. The actor plays Georgette, who is married to Hawke's character before Maggie comes into the picture. Georgette is a brilliant but pretentious Danish college professor with a strong personality, and Moore commits to the role wholeheartedly. As Nigel Smith of The Guardian noted in his review of Maggie's Plan at TIFF, "Moore is a pro at comedy for the same reason she is so adept at drama: she’s utterly fearless."

Moore's performance is all the more impressive when you consider the fact that her character has to go through an unusual rollercoaster ride of emotions. She is left by her husband for another woman, and then three years later, said woman shows up on her doorstep with the intention of rebuilding Georgette's disintegrated marriage. It would be a difficult task for any actor to try to capture this emotional journey, nonetheless to do so in a way that is comedic and with a foreign accent.

It's clear that a ton of talent was at work in the creation of Maggie's Plan, and while Maggie's "plan" itself may have been a bit messy, the resulting film is a carefully crafted piece of cinema.