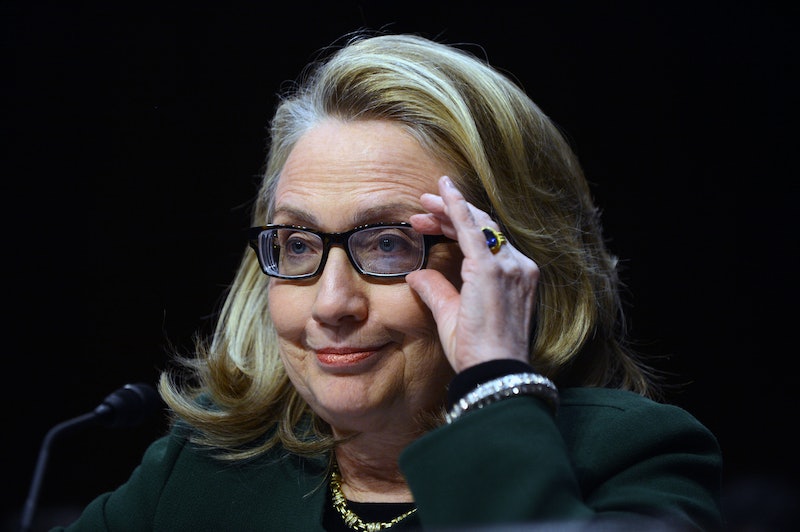 As far as any legitimate source of information has revealed, Hillary Clinton is healthy, despite Donald Trump-fueled rumors. Dr. Lisa Bardack, the Chief of Internal Medicine at Mount Kisco Medical Group and Clinton's personal doctor for 15 years, has attested that although she sustained a concussion once four years ago and has a pollen allergy, Clinton is in "excellent physical condition." As we saw on Jimmy Kimmel Live, she can also open the hell out of a pickle jar. There is, of course, a chance that Clinton has an undiagnosed, potentially terrible thing, like a brain aneurysm, but that could be just as true for me as I write this article (and I am now very worried).

The Clinton health rumors, though, have never been about fact. It's never really mattered whether anyone believes them or if anything can be proven. Because if people are talking about Clinton's health, it becomes an important reminder that she is after all, a sexagenarian woman.

And that's the real goal. As long as people are talking about how Clinton is an old lady (the demographic people most associate with weakness), Trump can make himself seem strong.

This kind of game is not new to political campaigns. It never looks good to make such an obvious low blow — to explicitly claim that your opponent is a weak old lady who can't handle ISIS because she would rather hand out hard candies to her grandchildren would not go over well. But Trump doesn't do much better when he says in a speech that his opponent lacks the "physical stamina" to fight ISIS (implying that she would need to arm-wrestle Abu Bakr Al-Baghdadi or something).

It's the same kind of political attack we see every cycle, but Trump seems exceptionally lacking in subtlety and savviness. Other campaigns have certainly launched low blows, but they've been more effective because they've been a bit more subtle. Remember the "Celeb" ad from 2008, which made Barack Obama seem young, inexperienced, and too focused on fame and not enough on politics? McCain's ad took advantage of something that was objectively true about Obama — that he was a media phenomenon — in order tomake negative comparisons between him and the likes of Britney Spears and Paris Hilton.

The Trump campaign could have done something similar. They could have asked seemingly serious questions about what happened to Clinton when she had a blood clot in 2012 and had to wear glasses to treat vision problems. They could have focused on it being a "real concern" that she isn't conscientious enough with her own self-care.

But nope. The Trump campaign, as usual, has the subtlety of a Michael Bay movie. They went full-bore conspiracy theorist. Rudy Giuliani told Fox News that voters should "go online and put down Hillary Clinton illness, take a look at the videos for yourself." And Trump spokesperson Katrina Pierson claimed, despite lacking any medical expertise or evidence, that Clinton suffers from dysphasia.

As usual, Trump's campaign is stymied by the same problem it always has — there is just no possible way for this man to handle subtlety.