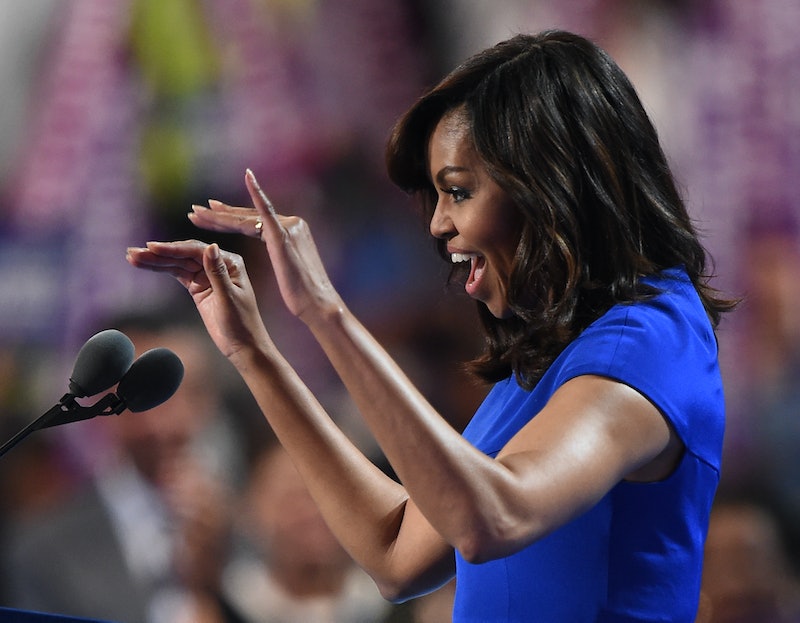 It seems as though Michelle Obama is inspirational without even trying, and her latest interview with Variety is no exception. In it, Obama talks about the power of pop culture, and addresses the need for diversity on TV. I don't know about you, but I love to hear FLOTUS talk about the shows she's avidly marathon watching (Orange Is The New Black and The Americans, FYI). But it's the discussion of the power of pop culture during the interview that is most interesting, and sheds light not only on Obama's own influence in the public eye, but her understanding of the importance of representation in the media. Throughout her time in the White House, she has used her status to influence change and promote social issues.

Obama tells Variety about the women and girls that come up to her and say, "Thank you for being a role model for me. I don’t see educated black women on TV, and the fact that you’re the first lady validates who I am." The First Lady's focus is consistently on the general public, on the impact popular culture can have on the nation, and the positive influence celebrities are capable of. As she says, "It becomes very important for the world to see different images of each other, so that, again, we can develop empathy and understanding.”

It's refreshing to hear Obama talk about popular culture and credit its influence, especially since she's had such a big impact thanks to her memorable appearances on television, or memes created of her. FLOTUS has a particular penchant for comedy, having made unforgettable appearances on shows like Billy On The Street and the Carpool Karaoke segment of The Late Late Show With James Corden. Despite being the First Lady, Obama is constantly accessible, and isn't afraid to laugh at herself or take part in elaborate jokes and performances. As she tells Variety, "I’m a product of pop culture. I’m a consumer of pop culture, and I know what resonates with people. I know what they’ll get a chuckle out of and what they think is kind of silly." Her ability to connect with people, and her personable nature, means she's the perfect person to influence change in the entertainment industry.

As her interviewer in Variety says, "She calls diversity in entertainment 'critical,' because she sees the industry as being able to influence perceptions." Knowing that representation on television and in movies is still oftentimes lacking, Obama notes the "critical" era we're in right now, in which change can, and is starting to, take place, but there's still a way to go. By discussing the need for accurate and diverse representation in the media, she is helping to move the industry in the right direction, as well as inspiring the next generation of writers, performers, and directors.

Clearly, Obama has used her position to influence pop culture, and this is likely to continue even when she leaves the White House. Following so many legendary TV performances, it seems likely that she will continue to work in the entertainment industry for many years to come.