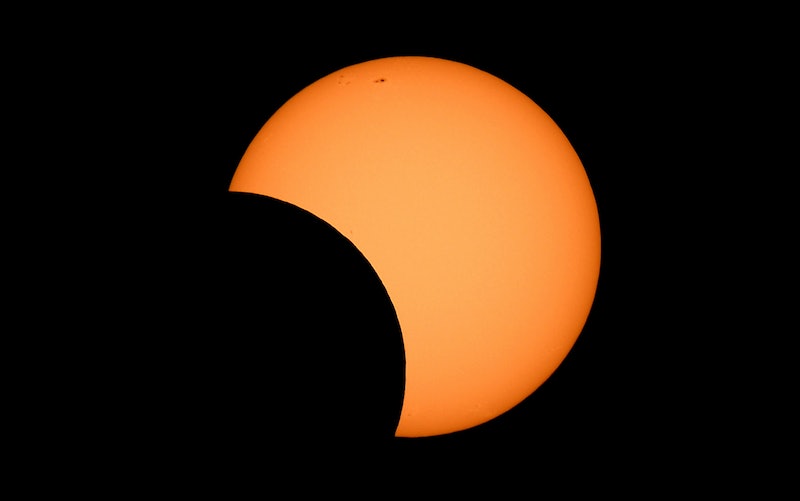 The only time I've ever seen an eclipse has been on an episode of Arthur — you know, the PBS cartoon with aardvarks — so imagine my excitement when I heard that one was imminent. That excitement lasted just long enough for me to Google when the 2016 annular solar eclipse is, though, because, alas! Alack! I, a Chicago-dwelling babe, am not going to get to see it. Like, not at all.

Many things are happening on Sept. 1: New month, new season, moving day for seemingly everyone — and now, in addition, an annular solar eclipse. And no, I'm not misspelling "annual." There are actually four kinds of solar eclipses: Partial, total, annular, and hybrid. Generally, a solar eclipse occurs when the moon moves between the sun and the earth. An annular solar eclipse can only occur when the moon is at apogee, also known as the farthest point away from the Earth. The moon's diameter will appear smaller than the sun, thus creating a floating circle effect. It sounds rad. And if you're in the right place on Sept. 1, you will get to fully witness the radness.

However, I am not going to be in the right place, even if I am available at the right time. This time around, the points where the eclipse is most visible will be in Madascar and locations in central Africa. According to NASA, the eclipse will begin at 3:14 p.m. EST, with the annular part hitting its peak for three brief, beautiful minutes at 9:05 p.m. EST. Humans in parts of the Democratic Republic of Congo, Mozambique, and Madagascar will also get to see some seriously cool sky stuff, though not as clearly and not for three full minutes. Those of us in, for example, the United States, will see pretty much nothing.

But here is the very good, very exciting news: Although the next couple of annular solar eclipses will be similarly not visible to us North American dwelling people (for the curious, there's one happening quite soon — Feb. 26 2017), on Aug. 21 2017, the United States will finally, for the first time since WWI, get to see a total solar eclipse. An astronomical event that is already being heralded as "The Great American Eclipse."

You guys. You guys. I'm starting the countdown clock now.