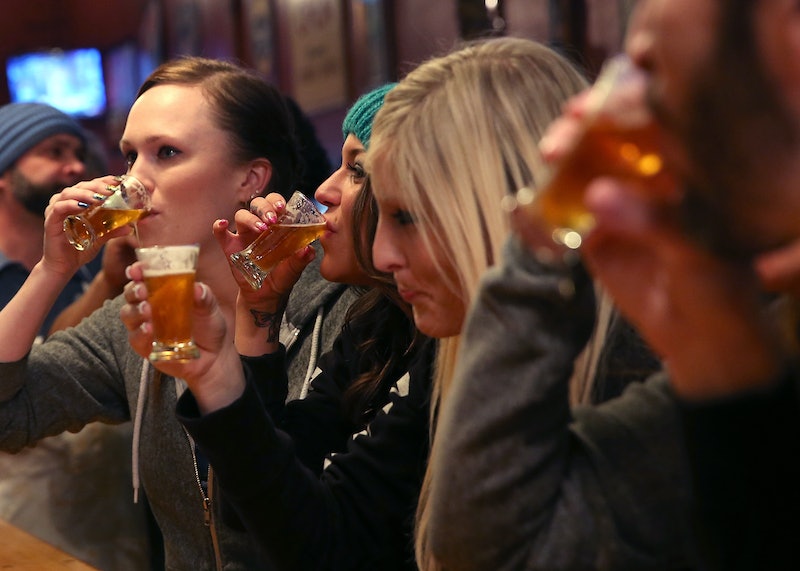 Ever thought about taking a beercation? It’s fun. It’s just like any other vacation, except instead of traveling under the boring pretense of wanting to see interesting sights and experience new cultures, you embrace what most vacations turn into anyway: a riotous, memorable (sort of) drink-a-thon. But with the explosion of a craft beer scene happening in this country, you shouldn’t pick just any place to tap in and check out. We picked the top ten cities in America for beer drinkers, based on prevalence of breweries and innovativeness of the city's brews themselves. Read on, book your ticket, and hop off to one of these lush-friendly locales.

Because these cities know their brewskies.

Simply put, Boston consumes more beer per capita than any other city in America. Fueling those estimable drinking habits are a handful of world-famous breweries and micro-breweries, including the historic Samuel Adams. The city’s many bars help, too.

California may be the state with the most breweries (354), but Vermont lays claim to the most breweries per capita, with more than two dozen serving its relatively small population. Many of them are located in Burlington and South Burlington, including Magic Hat. In addition to a slate of bars and pubs, the city also brings out its bottles en masse for the annual Vermont Brewers Festival, which is being held this July.

Where to see it brewed: Magic HatWhere to drink it: The Farmhouse Tap and GrillBrewery prevalence ranking: #9Creativity ranking: #8

This picturesque coastal city in Maine is home to 15 breweries, including Sebago, and Allagash, whose brewery tour TripAdvisor named the one of the best in America. The city’s waterfront brewer In’finiti has made a name for itself in the craft-beer arena, and also produces its own distilled liquors.

In recent years, Brooklyn has stepped out as a formidable player in the national brewing scene, with Brooklyn Brewery becoming a particularly popular brand. If craft beer is more your thing, Sixpoint Brewery in Red Hook puts out inventive concoctions at a steady rate (and has an awesome Instagram to boot). With Brooklyn being what it is (rhymes with "mipster"), you can bet that breweries, craft beer bars, and beer-related events all play a huge part in borough’s culture.

Where to see it brewed: Brooklyn BreweryWhere to drink it: TørstBrewery prevalence ranking: #7Creativity ranking: #3

When the bustling brewing industry in Brooklyn petered out in the mid-20th century, it was partly due to the rise of the brewing scene in the Midwest. To this day, beer-makers in the heartland still give their East Coast competitors a run for their money. The Twin Cities area is home to at least 30 breweries, including Indeed Brewery, which has perfected the retro hipster vibe so many beer-hounds crave, and Fulton Brewery, which boasts a 9.2 percent alcohol by volume imperial stout.

Where to see it brewed: Fulton BreweryWhere to drink it: Stub & HerbsBrewery prevalence ranking: #6Creativity ranking: #7

Sunny San Diego has more than 85 breweries and is famous for its variety of pale ales and IPAs. Beer is even such a big part of the city’s culture that the San Diego Brewers guild hosts an annual Beer Week. Last year’s was in November — stay updated about this year’s by visiting the event’s website.

Drinking beer must be one of the ways Seattleites cope with constant rain: The city is home to 35 breweries and annual beer week (this year, May 8th-18th). One explanation for the richness of the beer scene? Three quarters of the nation’s hops are grown in nearby Yakima Valley.

Where to see it brewed: Fremont Brewing CompanyWhere to drink it: The Beer JunctionBrewery prevalence ranking: #4Creativity ranking: #4

With 38 microbreweries, “nanobreweries,” and just plain breweries, SF has a seemingly unlimited variety of beers to choose from. And in a city dense with Silicon Valley creative types, the craft beer scene has kept up on the innovation front, offering experimental brews that have taken the city by storm.

With 154 breweries, Colorado is one of the most beer-loaded states in the U.S. — and Denver alone has more than 40 brewing locales. While beer giant Coors is the most famous in the area, the Mile High City also has a host of craft offerings, including Denver Beer Co. and Great Divide Brewing. Every Fall, the city hosts the Great American Beer Festival, one of the largest beer events in the country.

Portland has more breweries than any other city in the world. Its nickname is “Beervana” — making it an easy choice, needless to say, for our number one spot on the list. The city boasts 53 breweries, including the world-famous Widmer Brothers Brewing and BridgePort Brewing companies. And with a new crop of fancy eco-breweries on the rise, Portland also ranks high in creativity.

Where to see it brewed: Widmer Brothers BrewingWhere to drink it: Hopworks Urban Brewery and BarBrewery prevalence ranking: #1Creativity ranking: #2

More like this
After 24 Years Of Disney Vacations, I Finally Took A Trip On My Own
By Charlie Mock
16 Valentine’s Day Quotes About Chocolate That Will Make You Hungry
By Emma Cueto
Dunkin’s Valentine’s Day Lineup Includes A Drink That Tastes Like Dessert
By Alexis Morillo
Pret & Costa’s Coffee Is The Strongest On The High Street, According To Which?
By Sam Ramsden
Get Even More From Bustle — Sign Up For The Newsletter
From hair trends to relationship advice, our daily newsletter has everything you need to sound like a person who’s on TikTok, even if you aren’t.