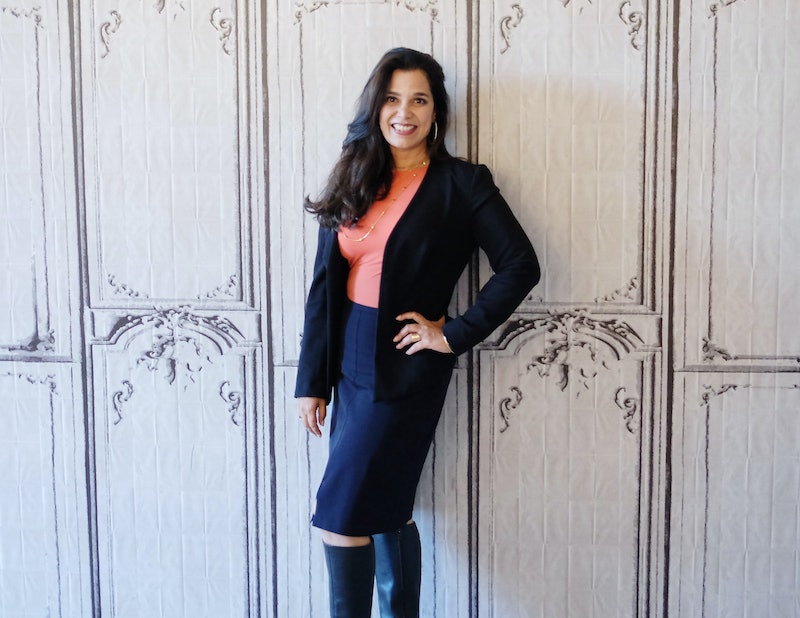 In an election year marred by gendered conflict, a holistic look at the state of women in areas outside the realm of politics is as necessary as it is refreshing. Kamala Lopez was fed up with the mistreatment of women in almost every facet of life, and decided to do something about it in the best way she knew how: through film. What she didn't bank on, however, was the difficulty of her journey — a journey that mirrors that of many women in this most pivotal and depressing of election years. Lopez makes the personal political in Equal Means Equal, her Kickstarter-funded documentary about the manifold ways women are discriminated against in the U.S. It couldn't have come at a better time.

Lopez was candid when speaking with Bustle about just how hard it was to see her passion project to completion. "It's really been a very, very long and arduous journey," Lopez says "The Kickstarter was really about the halfway point because we started filming and trying to put this thing together back in 2009."

Between 2009 and 2013, Lopez and her crew traveled across the country filming for their documentary, trying to get women on the record to discuss their experiences with discrimination. In October 2013, the Equal Means Equal team started their crowdfunding campaign, and by the end of the month, they raised a whopping $138,000, far above their initial ask of $87,000.

During the long road from idea to finished product, Lopez said she witnessed and experienced multiple profound and intense moments. One of the most jarring occurred when she and her crew were interviewing artist Isabela Diaz, a personal friend Lopez had known for years, at their studio in Los Angeles.

Diaz, who has close ties to mothers and activists looking for their missing daughters in Juarez, Mexico (a city known for its alarming rates of female homicides), told the Equal Means Equal crew something they (Diaz uses gender neutral pronouns) had never told anyone else: that as a child, they were raped and left to walk home, bloodied and partially unclothed. Diaz walked through the crowded streets of their hometown in this condition, and nobody stopped to help them.

While Diaz was telling their story, one of the film's top crew members ran out the room crying. Lopez later learned that the crew member's mother was murdered in an incident of domestic violence on the crew member's wedding night, and Diaz's story brought up difficult memories about this deep family tragedy. That day, Lopez learned the painful secrets of two people close to her, and caught one of their stories on camera.

"Almost every woman in this country has experienced these things, and no one is untouched by them," Lopez says. "That's what was so intense about making this movie." And she's right — the Rape, Abuse and Incest National Network (RAINN) reported that one out of every six women are victims of rape or sexual assault, and that on average, someone is sexually assaulted every two minutes.

While the nature of anecdotes like these have the possibility of shocking viewers and inspiring emotion, Lopez says she believes emotional reactions can be a positive force of change. "People always make fun of others for being emotional," Lopez says. "I think we need to be more emotional so we can connect more with people. If we really put ourselves in the shoes of these women and these people, it would be really hard to continue to accept [the current state of women] and it would really change things."

According to Lopez, the success of the Equal Means Equal is the result of a string of decidedly unsuccessful studio pitches. In a twist reminiscent of "Lewis's Law", which states that the comments on any feminist article prove the need for feminism, when Lopez pitched her project to studios, she claims she was often met with one shockingly sexist response: that it was somehow inappropriate for her to be shown in the documentary itself. This seemed to prove the need for Equal Means Equal given the blatant double standard that many male documentarians and filmmakers star in their own films.

"Many people told me that I had to take myself out of the movie, that the movie would not be able to get distribution and that nobody would see it because I was in it," Lopez says. "Then I thought, 'wait a minute — the highest-grossing American documentarian ever is Michael Moore, and he's in all his films. Morgan Spurlock is in all his films, Werner Herzog is in all his films, but I can't be in my film?'"

"I'd like to see the youth pick up the mantle of their mothers and grandmothers and finish this once and for all..."

The creation of Equal Means Equal was uniquely emotional for Lopez, both because it was her passion project and because she often interviewed people like Diaz who'd experienced incredibly difficult circumstances, all of which moved her. The emotional nature of the documentary made the story Equal Means Equal tells a part of Lopez's story, too, and the thought of taking herself out of it completely felt wrong to Lopez, her co-creators and her family.

With a sigh, Lopez said that many of the studio executives who passed on the documentary because she was in it are women. Given the absurd levels of sexism taking place the highest levels of politics, Lopez's revelation is unfortunately unsurprising.

Lopez's experiences as a professional actress in films such as I Heart Huckabees and Born in East L.A. while also living as a woman of color haven't been a walk in the park: when she attended Yale, she said she felt like "a zoo animal" and that she felt as if she were treated differently from her majority-white peers for her "otherness." Her experiences in Hollywood weren't much better, and mirror her interest in the wage gaps between men and women, and particularly between white men and women of color.

"For women of color, it's such a different conversation," Lopez claims. "We're stuck at minimum wage scale pay forever. My quote as an actor actually went down over the years as I aged."

Age, Hollywood's most intrinsic taboo, offered Lopez something she didn't have when she was younger: a feeling of comfort not only in her own skin, but in any situation she finds herself in. The feeling of being an animal in a zoo is long gone — where she once felt uncomfortable entering rooms full of unknown or important people, Lopez says now she can command a room, and feels in her element everywhere she goes. Even in a youth-obsessed culture like ours, the professional experience of a woman with a long resume shouldn't be devalued, even though it often seems that a large swath of Americans would prefer to see that happen.

With Equal Means Equal running its victory laps, Lopez, like the rest of the country in this polarizing political climate, is looking toward the future — both for her film, and for herself. Her biggest dream for her film? To have it spark the change that finally sees women protected under the constitution within five years.

"I would love to see Equal Means Equal spread across the country in an organic, grassroots manner like wildfire and reignite the national conversations on full legal equality for women," Lopez says. "I'd like to see the youth pick up the mantle of their mothers and grandmothers and finish this once and for all so that our basic human and civil rights are not subject to political cycles, until we are in the constitution."

Lopez focused her lens in Equal Means Equal on the multifaceted inequalities women experience. Whether she's leading her audience through horrific stories of rape and sexual abuse, discussing the terrible confines of prostitution, or outlining the staggering wage gaps that women still face, Lopez manages to strike both a serious and comfortable tone that is likely to bring into the fold some who may have been put off by other documentaries of this ilk.

As the country that spawned Equal Means Equal threatens to reach a breaking point, Lopez has found her stride in her personal and political lives, and hopefully, we as a nation will find ourselves in a position where dreams like Lopez's can come true.

More like this
Demi Lovato Explains Why She's Now Using She/Her Pronouns Again
By Alice Broster and Radhika Menon
If You Spend A Lot Of Time In Your Backyard, You'll Love These Genius Things On Amazon
By Mackenzie Edwards
The 10 Best Bras To Wear With A Backless Dress
By BDG Commerce
The 5 Best Underwear For Preventing Wedgies
By Lisa Fogarty
Get Even More From Bustle — Sign Up For The Newsletter