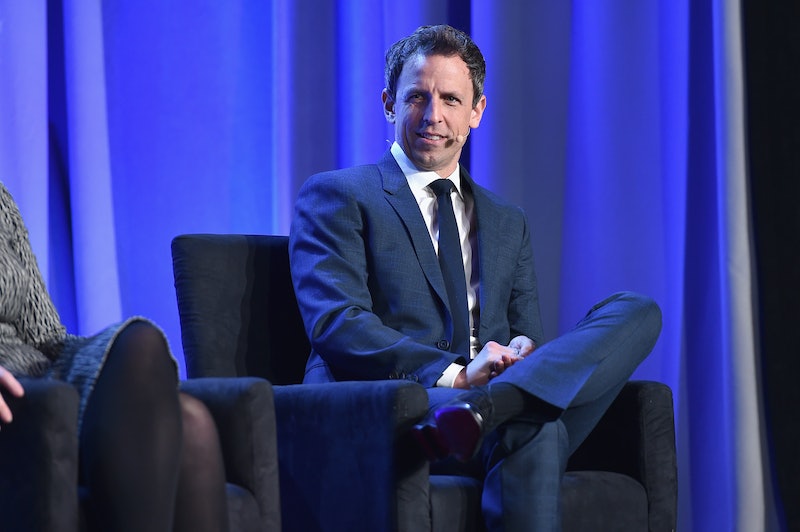 Seth Meyers has been going after Donald Trump since 2011, when he said, "Donald Trump has been saying he will run for president as a Republican — which is surprising, since I just assumed he was running as a joke" at the White House Correspondents' Dinner. And with each passing year, Meyers' criticisms of the Republican nominee — whose candidacy was unfortunately not a joke — have simultaneously become funnier and more sobering. On Monday night, Seth Meyers went after Donald Trump again, this time on his show's "A Closer Look" segment. He spent a chunk of that time arguing that Trump is never going to "pivot" to center as many people have speculated, and criticized the media for sustaining that speculation.

After showing a montage of various news anchors "breathlessly speculating" about the nonexistent pivot to the general election, Meyers explained why he thinks they're wrong. "The biggest sign that this pivot is not coming is the latest group of people Trump surrounded himself with, a new inner circle comprised of some of the most controversial figures in conservative media," Meyers said. He was referring, of course, to Steve Bannon, Roger Stone, and Roger Ailes, who are at the center of the "staff shake-up" of Trump's campaign.

To further dispute the possibility of a pivot, Meyers pointed out that Trump fired a controversial campaign manager in favor of surrounding himself with people who want him to be even more controversial. Some Trump critics think this is a sign that Trump knows he's losing, but Meyers said Trump is probably just in denial.

In response to conservative radio host Charlie Sykes' tweet about Trump's campaign entering the "Hospice Phase," Meyers had this to say: "If Trump were dying, I don't think he'd go into hospice care. I think he'd deny he was dying, blame the media for saying he was dying, accuse Obama of poisoning him, and then claim 'I'm the best at dying, no one's better than me at dying, everyone says so. Everyone says so.'"

But of course, everyone says so. Just today, Trump tweeted that "it is being reported by virtually everyone, and is a fact, that the media pile on against me is the worst in American political history!" "Everyone" seems to be Trump's primary source for pretty much everything he says, and Meyers isn't surprised. In fact, he isn't surprised by the direction Trump's campaign has taken, either — after all, he said, the people Trump now surrounds himself with are the very people who created the right-wing media bubble that allows Trump to thrive.

Meyers argued that Trump and his supporters are doing exactly what the far-right has always done. The fact that a Trump lawyer responded with "says who" to a question about polls on CNN shouldn't surprise us, Meyers said, because it is exactly what the right has done when it comes to things like climate change.

Not everyone is saying so, but they probably should.