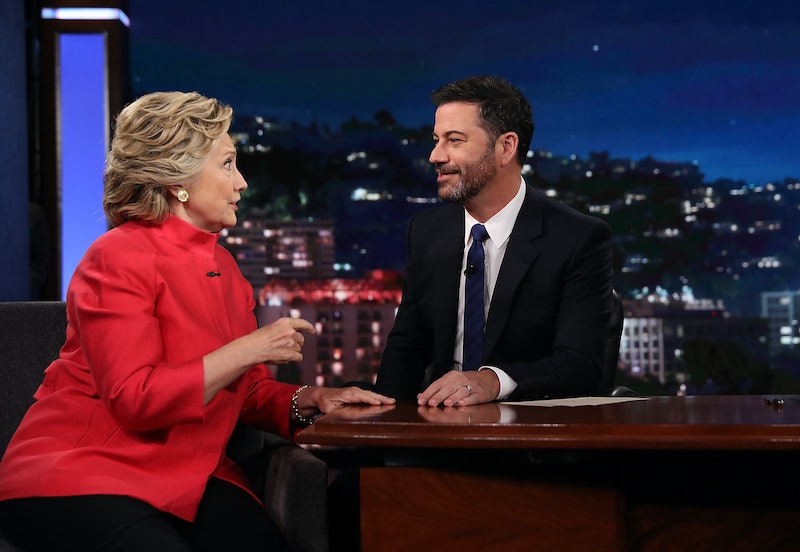 For those unfamiliar with the term, "Picklegate" refers to Jimmy Kimmel asking Hillary Clinton to open a jar of pickles to prove that she is, in fact, in good health despite Trump's latest claims. After she succeeded in opening the jar, some Twitter users have claimed the jar was allegedly pre-opened — hence, "Picklegate." The opening of the pickle jar occurred amidst the Republican presidential nominee's claims that Clinton is allegedly suffering from "dysphasia," a neurological condition that alters communication ability. Trump cited the concussion she suffered in December 2012, and medical papers that FactCheck.org deemed fraudulent, as evidence enough. During her interview with Kimmel, Clinton denounced Trump's latest strategy:

I don't know why they are saying this. On the one hand, it's part of the wacky strategy: just say all these crazy things and maybe you can get some people to believe you. On the other hand, it just absolutely makes no sense. I don't go around questioning Donald Trump's health.

Though Clinton's actual doctor released a letter back in July 2015 confirming she is healthy to serve as president, the Trump campaign and conservative outlets are seizing on a publicity stunt gone horribly wrong in the eye of some anti-Clinton voters. This time it's not related to emails, foundations, or private servers, but to a pickle jar that Clinton was asked to open by Kimmel after joking about her health rumors.

Appearing on ABC's Jimmy Kimmel Live!, Clinton attempted to dispel health rumors, by jokingly asking Kimmel to take her pulse. Then Kimmel in return asked her to open a jar of pickles: "Can you open this jar of pickles? This has not been tampered with." Rumors on social media are now circulating that the jar had been opened prior to Clinton's on-air "struggle" to open the jar. In reality, Clinton appeared to have opened the jar without much difficulty.

If the jar was in fact pre-opened, it may not have been the most opportune decision to pretend to open an-already opened jar in the midst of recent questions about the Clinton Foundation, but this can of worms (jar of worms?) is so ridiculous, it's just plain embarrassing that some Trump supporters would think it's adequate ammunition against Clinton. Regardless of what you think about Clinton, a tongue-in-cheek moment on a late night TV show should in no way be part of the conversation regarding the election. Not to mention, making fun of a woman because she can't open a jar of pickles is really not cool. And in case you haven't tried it, opening a jar of pickles is definitely not the easiest thing in the world to do.