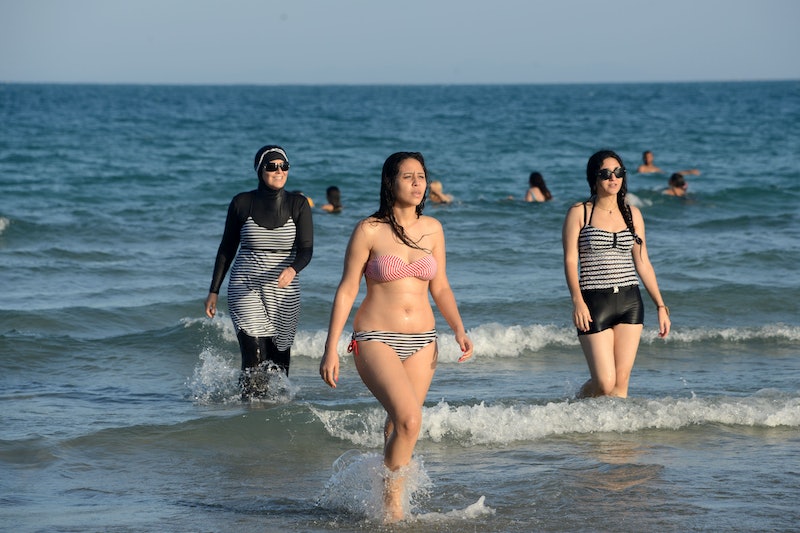 Implemented by Parisian politicians and law enforcement in France, the burkini ban is a Western country's latest attempt to police women's bodies. The recent ban, instated at several beaches throughout France, prohibits the swimwear, ludicrously stating that the burkini — which covers all parts of the body aside from the face, hands, and feet — constitutes "improper clothes that are not respectful of good morals and secularism." But as one Twitter user put it, regardless of how you feel about Muslim religion or culture, there is certainly something morally reprehensible about a police officer telling women to remove their clothing.

Though France became the first European country to ban the burqa in 2011, the burkini ban was instated July of this year. This most recent move to prohibit religious clothing in public specifically stems from the terrorist attack along a beach in Nice, France last month. Responding to this fear with full force, French law enforcement are now fining women up to €38 (roughly $42) when they are found in violation of the ban.

An appeal against the multi-city ban was filed by the French NGO Human Rights League, and will be heard by the country's highest administrative court on Thursday.

According to a report from The Guardian, witnesses have seen French officers instruct burkini-clad women to remove their clothing while out on the beach. On Tuesday, a mother of two was seen lounging on a beach in Cannes wearing a headscarf, tunic, and leggings before police appeared and instructed her to remove her tunic. She then received a ticket which read that she was not wearing "an outfit respecting good morals and secularism.”

A witness to the horrific incident recalled the scene to The Guardian, saying: "The saddest thing was that people were shouting ‘go home,' some were applauding the police. Her daughter was crying."

Any law that essentially forces a woman to strip in public is despicable, sexist, and pointedly degrading. Giving police officers the power to enforce such a law, coupled with a ridiculous fine, allows this Islamophobic ban to run rampant, all in the name of supposed public safety.

Determining that women in burkinis somehow pose a threat is a clear violation of their rights, and asking them to remove that clothing goes a step further in violating their bodies. To be okay with that — as many French officials appear to be — exposes their clear sexist and Islamophobic motivations.