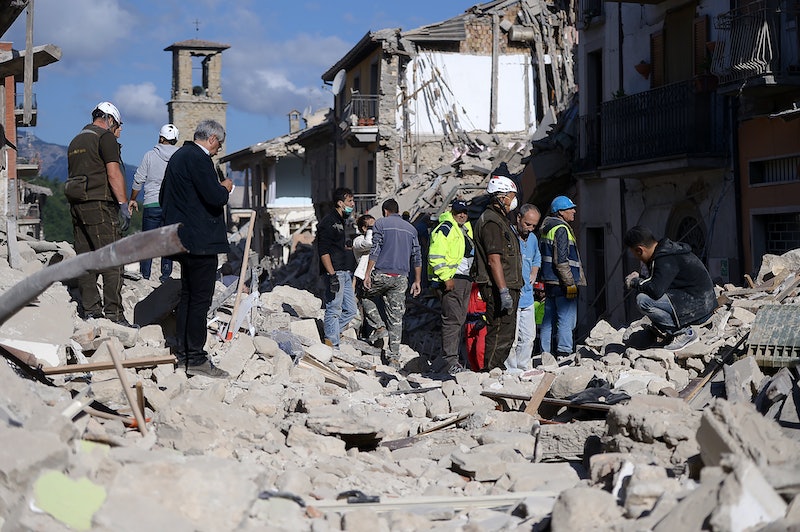 In the middle of the night Italy was struck by a devastating earthquake, the full effects of which are still unclear well into the next afternoon. At 3:36 a.m. local time, a 6.2-magnitude earthquake struck a mountainous, central part of the country laced with tiny towns and villages. Among those hardest hit were the villages of Amatrice, Accumoli, and Arquata del Tronto. Residents there were awoken by the initial tremor and more than 40 that rolled through the area before sunrise. The updates on the Italy earthquake bring more bad news as the death toll continues to rise. Update: The death toll has continued to rise throughout Wednesday and is expected to continue doing so. You can research ways you can help here.

Earlier: The latest official number puts the number of victims at 38, but according to The New York Times, the number is expected to rise because a large number of people remain unaccounted for. To give you an idea of how high the death toll might continue to go up, look at one town: Amatrice. Of those confirmed dead, at least 27 were from Amatrice and Accumoli. But the mayor of Amatrice, Sergio Pirozzi, told Sky News Italy that there were at least 35 dead in Amatrice alone. So expect the official count to rise throughout the day. The Italian news agency ANSA has put the number as high as 63.

That's the same mayor who told Italian state TV channel RAI-TV that the earthquake caused such devastation in Amatrice that "the town isn't here anymore," The Guardian reported. In Accumoli the situation was no better. The mayor there, Stefano Petrucci, said that the damage was even worse than expected. "Now that daylight has come, we see that the situation is even more dreadful than we feared with buildings collapsed, people trapped under the rubble and no sound of life," he told the state broadcaster.

Italian Prime Minister Matteo Renzi addressed the nation just after noon local time. He said the "priority is to get people out of the rubble." He will visit the area Wednesday afternoon. He also touched on the mourning process that has just begun:

At moments of difficulty Italy knows how to cope. And when things don't go well, the whole of Italy demonstrates its most beautiful aspects. From now on we will make sure that we won't leave any families or communes on their own. And it will really work, because in the next few hours we can save human lives from the rubble and give hope to those territories that have been so badly affected.

In addition to the search for survivors, emergency workers had to deal with the aftershocks. The strongest occurred about an hour after the initial quake at 4:33 a.m. It was a magnitude 5.5-magnitude quake. But Italy's National Institute of Geophysics and Volcanology kept registering smaller aftershocks as late as noon.

The French President Francois Hollande has offered assistance, Germany's Angela Merkel expressed her sympathies, and the Pope prayed for the victims instead of holding his weekly catechesis. "Hearing the mayor of Amatrice say that the town no longer exists, and learning there are children among the dead, I am deeply saddened," the Pope said, according to ABC News. "I cannot fail but to express my heartfelt sorrow and spiritual closeness to all those in those zones afflicted."

The quicker the rescue workers can get to any buried survivors, the greater their chance of survival. Andrea Gentili, a civil protection worker, told Associated Press that they need more equipment. "We need chain saws, shears to cut iron bars, and jacks to remove beams: everything, we need everything," he told the AP.

The news service reported that residents had begun to help try to dig people out using just shovels or even their bare hands.