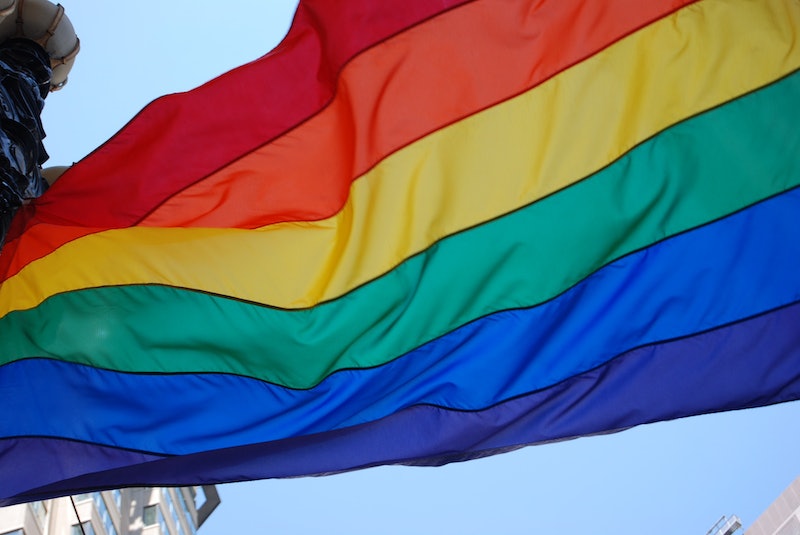 There are a lot of awful, prejudiced people out there who do awful, prejudiced things, but sometimes bad behavior by one person can bring out the best in others. Take this story out of Natick, Massachusetts: After a same-sex couple’s house was vandalized, neighbors put rainbow flags all over the neighborhood in a show of solidarity. Their actions don’t make the original vandalism OK, of course, but they certainly can help to restore one’s faith in humanity.

Cari and Lauri Ryding are a married couple who have lived in Natick for a number of years. “I loved the diversity of the generations, and how there’s a commitment to that — of all ages, and all shapes, and sizes, and preferences,” Cari told The Boston Globe. “I’ve been feeling this energy in the neighborhood for years.” Lauri said that the neighborhood had always “embraced” their relationship, so when she and Cari recently returned from vacation, they were shocked to find that someone had thrown eggs at their front door and stolen the rainbow flag they had hung up following the horrific Orlando shooting in June. “It really sent us reeling,” Cari said.

They filed a police report, but so far they don’t know who vandalized their house, or precisely why. “I don’t want this to happen to anybody else. Is it just vandalism? Is it a hate crime? Is it just pranksters?” Lauri asked on WCVB. “It really is hard to feel like someone hates you,” Cari said.

The silver lining to this story is the way that the Ryding’s neighbors reacted. When they found out about the vandalism and the stolen flag, they decided to put up their own flags. “We said, ‘Why don’t we all have the flags? They can’t take them from all of us,’” Dennis Gaughan told the Globe. Someone suggested that they order flags from the Rainbow Peace Flag Project, an organization that provides free rainbow flags in the Natick area, and, by Sunday, a group of children were biking around the neighborhood, handing out flags to residents. “It just happened so quickly — the whole neighborhood said, ‘Get me a flag. Get me a flag. Get me a flag,’ ” neighbor Penni Rochwerger told the Globe. Now, more than 40 houses in the neighborhood are flying rainbow flags with the word “peace” stretched across them.

“One person’s act of fear and maliciousness created such a powerful statement of love,” Lauri said. “We are very blessed, very fortunate.” It’s unfair and wrong that the Rydings were ever made to feel unsafe or unwelcome in their own neighborhood, but their neighbors' loving, rainbow-hued response really is a beautiful outcome.