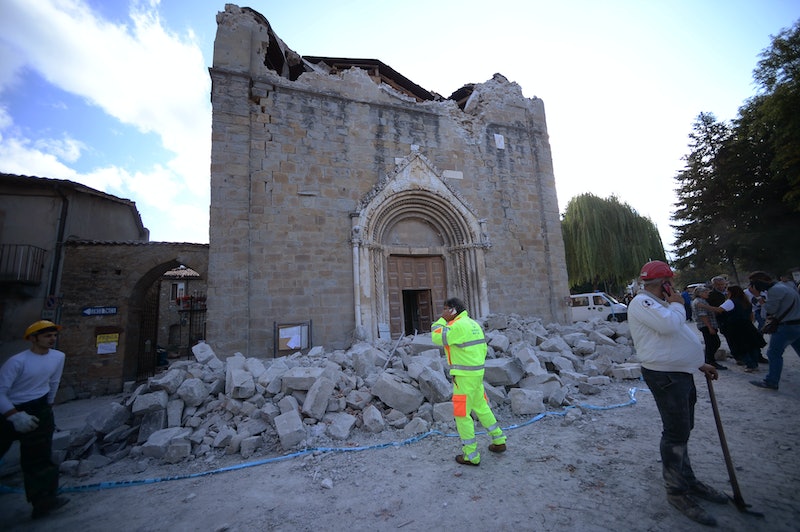 A series of 40 devastating earthquakes ripped through multiple Italian towns early Wednesday morning, killing at least 73 people. The first earthquake — a colossal 6.2-magnitude tremor — struck the town of Amatrice, a central Italian city home to medieval architecture. The fragile buildings meant that Amatrice was particularly vulnerable to the disaster, and multiple centuries-old, historic buildings have been destroyed in the earthquake.

The picturesque medieval town served as the tragic backdrop to the earthquake, so powerful that it was felt over 100 miles away in Rome. Amatrice, along with multiple cities through the mountainous region of central Italy, were exposed to an additional 200 aftershocks following the initial quake. Another devastating 5.5-magnitude tremor struck the region several hours later.

The Guardian reported that the center of Amatrice was hit the strongest, trapping hundreds of residents under their homes and collapsing buildings throughout the town. Among the buildings destroyed was the medieval church of Sant’Agostino.

A traveler's guide to Amatrice said that the facade of the church contained a 15-Century rose window, and that it greeted visitors with a late Gothic entrance door. Photographs taken in the aftermath of the earthquake indicate that the rose window has been destroyed. Though the damage is still being assessed, Sant’Agostino was also home to prized statues of the Archangel Gabriel and the Virgin Annunciate, as well as 15-Century paintings of the Annunciation and the Madonna and Child with two angels.

Much of the town's square, Amatrice's hub of activity and tourism, was also damaged in the earthquake. Homes and municipal buildings in Arquata del Tronto, just 15 miles north, also suffered extensive damage.

Photos showed some damage to one of Amatrice's landmarks, a 13th-Century bell tower. The bell appears to have fallen from the top of the tower, but the structure itself was one of the few buildings to remain largely intact in the center of the city. Ominously, the clock on the tower is stuck at the time at which the earthquake hit.

Though the damage to buildings does not compare to the extreme hardship felt by the community, it is of course a shame to see a town that's home to such history and art face such a disaster. In the months and years to come following the earthquake, Amatrice will hopefully be able to repair some of the damage done to its history and culture.