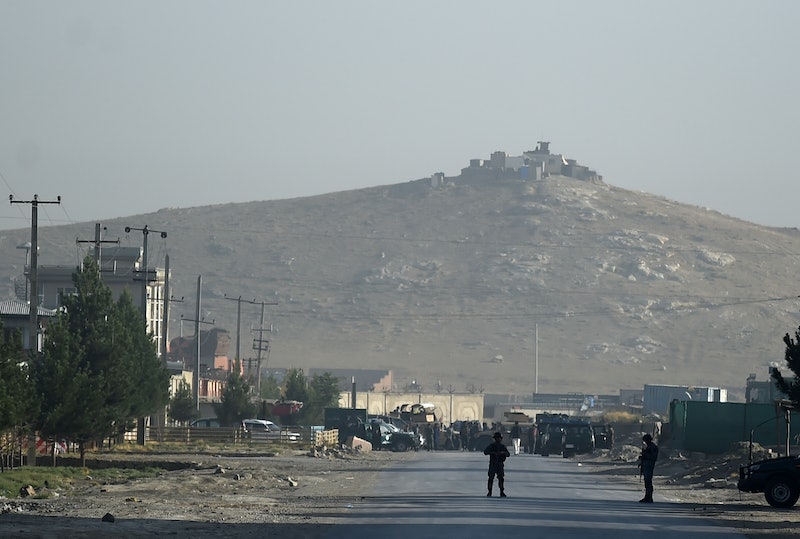 Update: CNN reports that one security guard was killed in the attack, and 21 students were injured.

While the situation is still unclear, and early information in chaotic situations like these can often be contradicted rapidly, CBS News journalist Ahmad Muktar has reported that "several American professors" were still inside the building, along with an undisclosed number of students — somewhere in the hundreds. While some were reportedly able to escape through emergency exits, as it stands now, the reports suggest that a large number of people are still trapped inside.

A photographer with the Associated Press, Massoud Hossaini, has also tweeted from inside the building. A 2012 Pulitzer Prize winner, Hossaini stated that "we are stuck inside the AUAF," and reported hearing gunfire followed by an explosion, adding "this maybe my last tweets." A student inside the building reportedly told the AFP via phone that they were stuck in a classroom among fellow students, and that, "I heard explosions and gunfire is going on close by."

The American University of Afghanistan first opened its doors to students in 2006, and it's reported that there are currently about 1,700 students enrolled there. This latest attack reportedly comes on the heels of the recent abduction of two employees of the AUAF on Sunday, according to The Hill, the killing of one U.S. soldier by a bomb in Helmand Province, and the injury of another soldier on Tuesday.

CBS News reported an eyewitness account that the attackers managed to gain entry to a hospital adjacent to the university. At the time of this writing, there was no information as to deaths, or what motivations were behind the attack. One student described "bursts of gunfire" to Reuters, however, and as Al Jazeera noted, this came amid the Taliban's usual summer season ramping-up of violent anti-government attacks.

The president of the AUAF has reportedly confirmed to the AP that an attack is underway, saying "we are trying to assess the situation." It's important to bear in mind that available information can change rapidly, and sometimes in the midst of a developing story, facts and reports can change. Thus far, however, there continue to be no reports regarding how many people, if any, have died in the attacks.