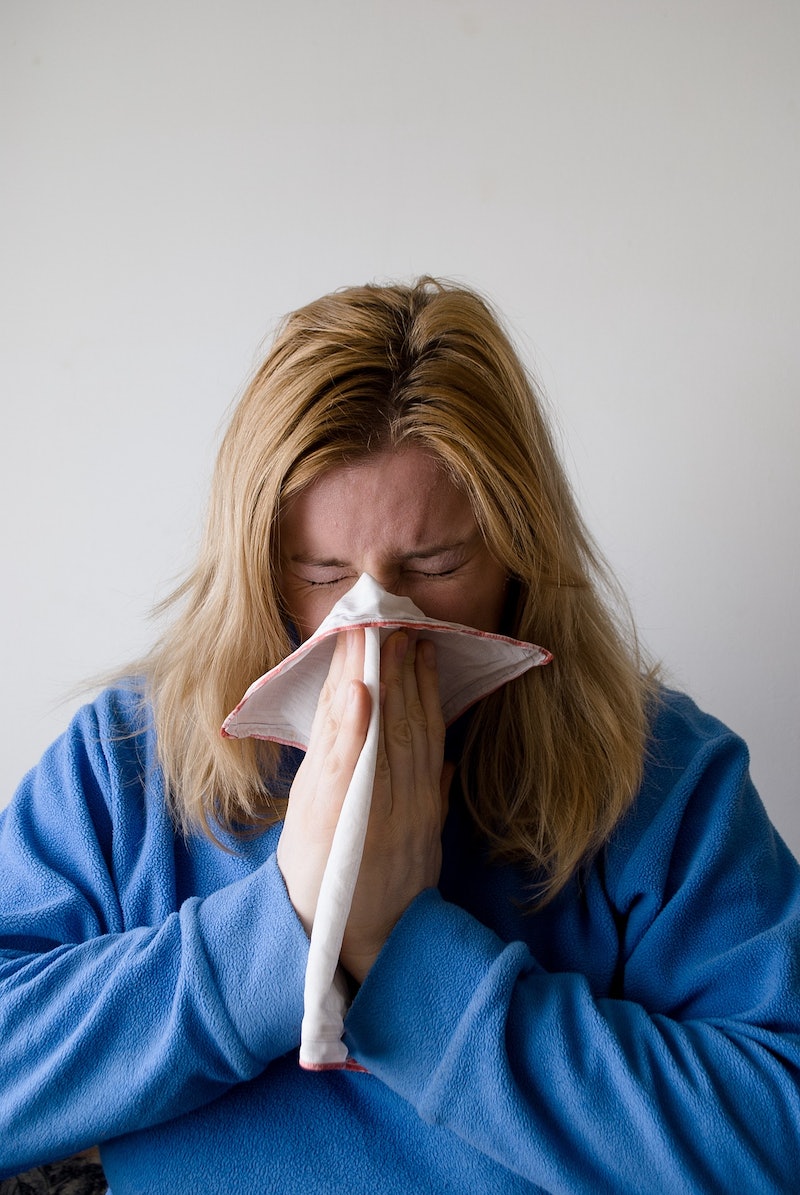 If you've ever had the dreadful experience of going to work when you're feeling ill, you already know what a big difference having paid time off for sick days can make. And, indeed, a new paper suggests that if employers offer paid sick days, it might actually benefit the workplace in some big ways. The paper, which was published by the National Bureau of Economic Research, found that when employees are given paid sick days, the flu rate "decreases significantly." It's yet another reason to make the case for paid sick days — particularly given that so many people don't have access to it.

For their study, the NBER examined regions of the United States that offer paid sick leave in comparison to Google Flu data from the years 2013 to 2015. Based on this data, researchers estimated that having paid sick leave prevent cases of the flu or "influenza-like disease" for 100 out of every 100,000 people per week. (As Susan Rinkunas points out at Science of Us, though, it's worth noting that because the federal government does not require states to report flu rates to them, the specific number of people who come down with the flu are all estimates.)

Still, the Centers for Disease Control and Prevention (CDC) estimate that between 3,000 and 49,000 people come down with the flu every single year. And while for many of us, having the flu might mean we suffer through a few days of horrible aches and lots of sneezing, it's important to remember that the flu can be lethal, especially if you have a pre-existing condition or chronic health issues on top of it.

Even when we open up our discussion of paid sick days beyond the flu, though, it comes down to one major point: When workers have access to paid sick time, people seem to be healthier overall. This makes a lot of sense: Not only are you, the original sick worker, getting time to heal and rest, but you're also not spreading your illness to your coworkers.

Come to think of it, it prevents the spread of illness to a whole lot of other people, too. Think about it: When you're on your way to work, how often do you interact with other people, such as on public transit or at your local coffee shop? I'm willing to bet there are a ton of ways you can accidentally spread germs on your way to your job that would be prevented if you were able to take the day off.

It's significant to remember, too, that in the United States, these aren't fluke scenarios. According to the recent paper, roughly half of Americans do not have access to paid sick time. It impacts low-income workers the worst, as an estimated one third of low-wage workers have access to paid leave when they are sick. As many of us know, it is a federal mandate to have access to 12 weeks off per year through the Family Medical Leave Act, though that amount of time is unpaid.

According to Business Insider, some states and cities have started their own initiatives to require paid sick time off for workers, including Connecticut, Massachusetts, and California — but progress has been slow, especially when you consider how many workers feel pressured to go to work sick or else risk losing valuable wages. While losing wages is worrisome for anyone, it can be especially tough for low-income workers, who may not have the same savings as higher-paid workers to even out the lost days of work.

It all comes down to the same thing: Paid sick days are a good idea. They keep individual workers healthy, they keep the overall health of the workplace healthy, and healthy workers results in better business in the long run. Literally everybody wins.

More like this
6 Abortion Advocates To Follow On TikTok
By Sara Youngblood Gregory
How To Protect Your Digital Privacy If You Need An Abortion Post Roe v. Wade
By Kaitlyn Wylde
5 Crystals To Manifest More Money
By Megan McCarty
How To Fight For Reproductive Rights, Based On How Much Time You Have
By Courtney Young
Get Even More From Bustle — Sign Up For The Newsletter