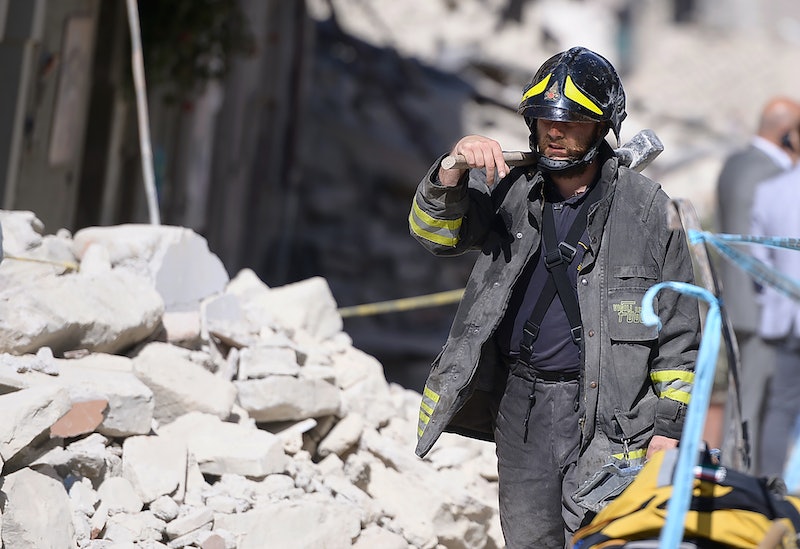 The latest update claims that the official count of lives lost in today's earthquake in Central Italy has shot up to 73. The event has resulted in a catastrophic amount of rubble, collapsed structures, and dust, as initial photos and videos of the Italy earthquake have showed.

There are hundreds among the injured, and thousands are now homeless and in dire need of temporary housing due to the extent of damages. Red Cross responded to the scene with rescue teams, search dogs, and 20 ambulances. Volunteers were also in the region, helping provide first aid and other support to survivors in the area, which has now been hit with more than 80 aftershocks.

While there isn't yet video footage available of the moment the earthquake struck, there is video showing the scope of the damage, and most striking is the excess of rubble, which is proving to have devastating effects. Amatrice Mayor Sergio Pirozzi spoke to RAI state television about the wide-scale damage in his mountain village: "We have extracted several dead bodies but we do not know how many there are below...There are dozens of victims, many under the rubble. We are setting up a place for the bodies." The Red Cross put out a statement earlier today saying that several people have been pulled out alive from the many stockpiles of rubble this morning. In the video below, you can glimpse the damage as locals try to navigate through the rubble:

Tommaso Della Longa, the spokesman for the Italian Red Cross, addressed the calamity and said, "People are in shock, they have seen their houses collapse around them and they have lost everything. Our volunteers are with survivors now and trying to help them come to terms with this disaster." He went on to acknowledge that a lot of the towns hit are suffering, having lost schools, churches, and houses to the earthquake.

According to The Guardian's latest updates, Italian Prime Minister Matteo Renzi said on TV that he would be visiting the most affected areas later on Wednesday, adding that the priority is rescuing those trapped under the rubble. So far, the EU has stepped up and offered its support — German Chancellor Angela Merkel and French President François Hollande have both offered support and sympathy.