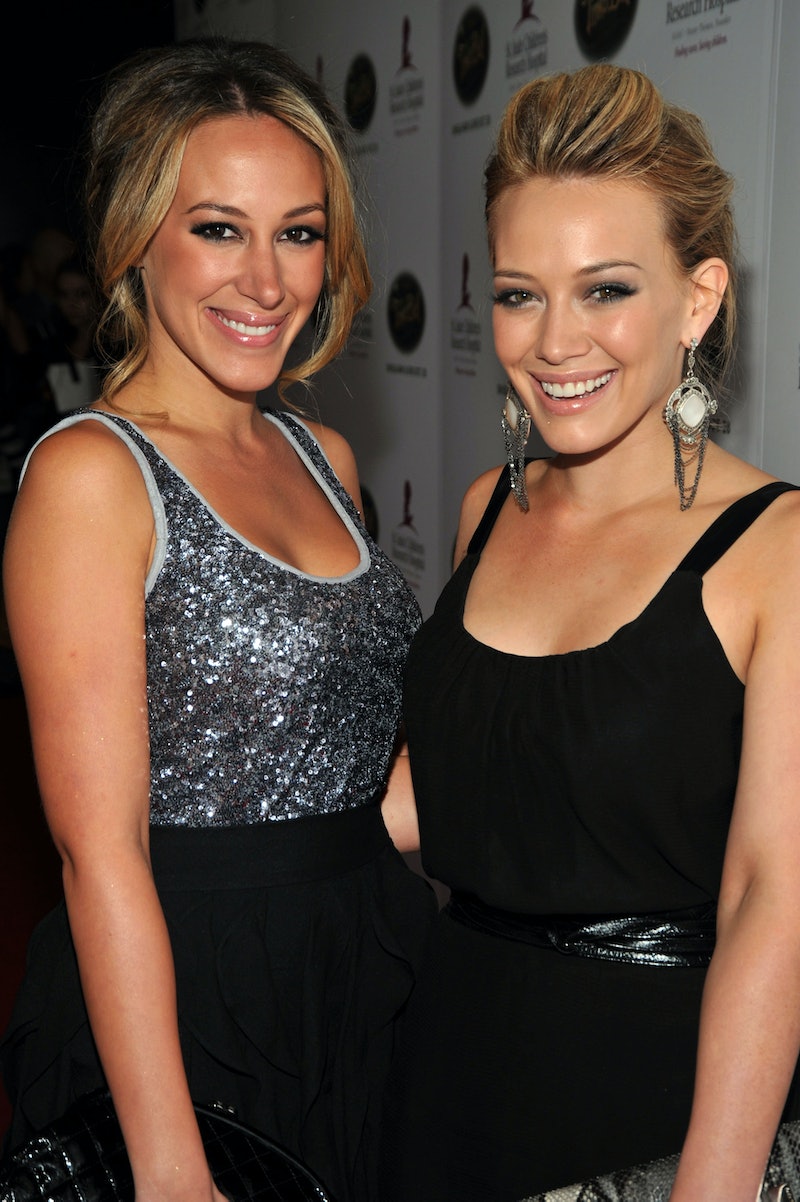 You probably recognize Haylie Duff from playing Summer in Napoleon Dynamite, Sandy on 7th Heaven, "Cousin Amy" on Lizzie McGuire, or from all of her super addictive Hallmark Channel original movies. Now, she's making a name for herself in the cooking world. Haylie Duff is getting a second cooking show called Haylie's America, which premieres Thursday, Sept. 8. "I'm so excited about it and so thrilled to be doing a second series with Cooking Channel," Duff tells Bustle over the phone. "It’s all about being out on the road and outside the kitchen and I can’t wait to share with people."

Duff's first cooking series was titled The Real Girl's Kitchen. Actually, before it became a TV production, it was initially a blog that turned into a book. Now, fans who follow her cooking success can tune into Haylie's America, which features the 31-year-old exploring different locations in America and, of course, the local cuisine that comes with them. "This show has been different from Real Girl’s Kitchen, because I’m outside of my kitchen so much more," Duff says. "The experience really has been more about experiencing new places and new people, but the feeling is still very much the same." Basically, if you love The Real Girl's Kitchen, you'll love Haylie's America.

Before becoming known for her culinary skills, Duff struggled in the kitchen. "I got started in the food world because I started a blog called The Real Girl’s Kitchen and it came out of me not really not knowing how to cook," she explains.

"When I first started my blog I didn’t know how to make anything. So the first probably six months or so most of my posts had more to do with the things I was messing up or the mistakes I was making and I think that’s what endeared people to what I had to say in that space. People kind of felt like, 'Hey, she’s making all these mistakes, too, and not really trying to be like an expert.' Over the last few years now, with me getting in the kitchen and cutting my teeth a bit, now I’m sharing original recipes, which still blows my mind."

Speaking of original recipes, if you want to cook like Duff, she suggests whipping up something with Philadelphia Cream Cheese, which she's recently partnered with. "I love Philadelphia Cream Cheese because they have so many new flavors that are, honestly, they’re so delicious and using real ingredients in them," Duff explains. "The veggie one I’m a little bit partial to, it’s kind of like my favorite. I really just love that they’re using real ingredients in them. The peach one has real chunks of peach in it. For me, I love being able to see those real ingredients, but also being a new mom anything that’s an easy snack is for me … It’s such a simple way of getting delicious on the go without a whole lot of fuss."

To see how far she's come is not only amazing, but also sets a great example for her daughter, Ryan. Admittedly, Duff says she does encounter "mom guilt" from time to time as a working mom, but knows she's doing the right thing as hard as it may be to leave her daughter for work. Even her fiancé, Matt Rossenburg, tells her Ryan is only going to end up thanking her in the long run. "He's like, 'You’re setting a really great example for her for when she’s a grown woman to make a career for herself, be independent, [and] be self-sufficient.'" As difficult as it is, Duff says, "I feel very fortunate I get to spend as much time with her as I do when I’m home. These little one or two day trips for work, it’s all ebb and flow at the end of the day and everything balances out. I hope that she grows up and looks back and is like, 'Wow, my mom is really out there working hard to set a good example for me.'"

You know what else is setting a great example for Ryan? Seeing her mom and Aunt Hilary cook in the kitchen together. "My family just loves to cook together in general," she says. But, when it comes to making food with her sister, Duff really enjoys it:

"The last few months have been hard for us to do that together much, because she’s been here in New York filming Younger, her TV show. I’ve been in Los Angeles, but we got a weekend together out in Malibu recently with our kids. My sister does like to put me to work a bit on those weekends. She’s like, 'We would like this for lunch and we would like this for dinner.' I’m like, 'Oh, OK, sis.' I’m like a short order cook whenever we’re all together, but I’m usually just happy that we’re getting to spend time together that I’m all too happy to oblige."

Not only do these two cooking side by side show Ryan that family is important, but also watching your mom go from a non-cook to someone who is known for cooking has to be a pretty great feeling. Yes, Ryan is only a year old, but I'm sure she's already being inspired by her successful mom.

To see Duff in action and why she's such a great role model for her daughter, be sure to check out the first episode of Haylie's America Thursday, Sept. 8 at 10 p.m. EST on the Cooking Channel.