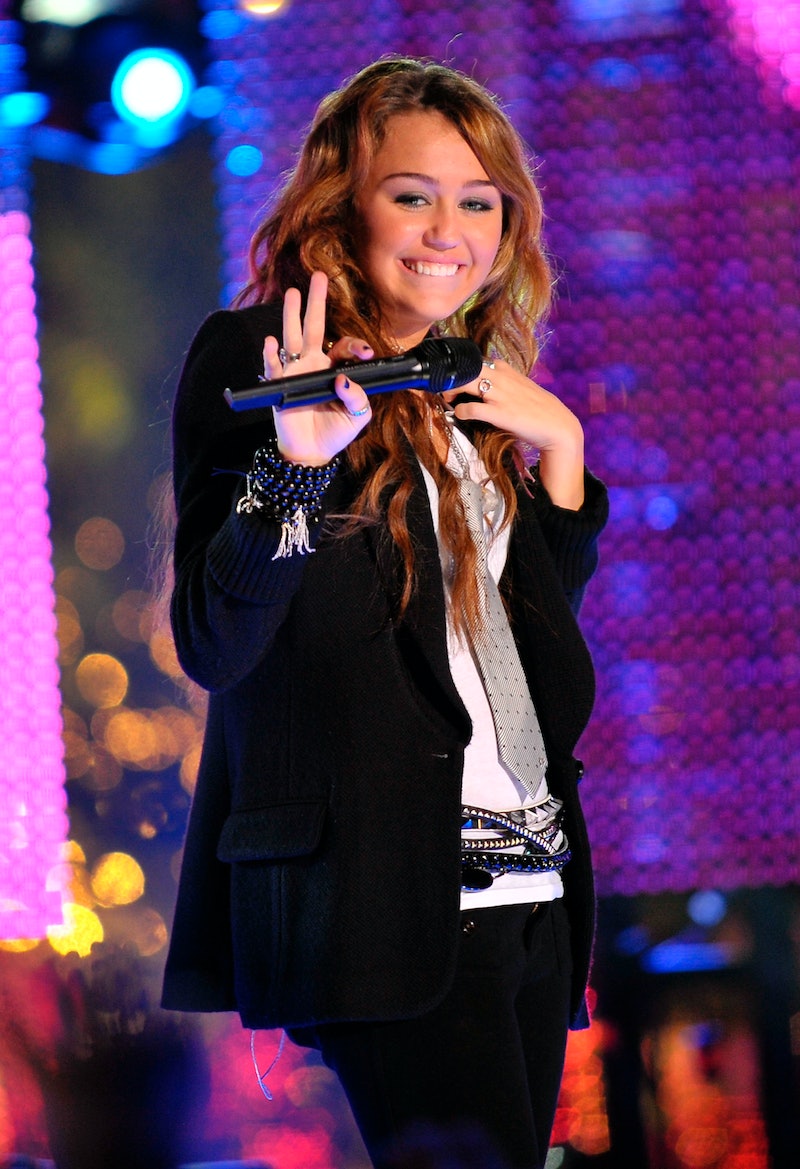 The VMAs are a time to let your personality shine, and no one knows that better than Miley Cyrus. The actress might be fresh in your mind for her crazy outfits, but she wasn't always the risky dresser that she is today. Once you see Cyrus' very first VMAs look, you'll be blown away by the style transformation.

Think back to 2008 for a second. Odds are you were wearing your leggings and singing along to Cyrus' song "7 Things" on the radio. Meanwhile, the actress turned singer was walking her very first VMAs red carpet. She earned herself a nomination for Artist To Watch, according to MTV, which was definitely an accurate category. Now, you might remember her hosting the 2015 event, but this was way before that, back in her Hannah Montana days.

Believe it or not, Cyrus' 2008 VMAs outfit wasn't really that noteworthy, at least compared to the looks she wears now. She did look pretty great, though. Dressed in all black, she was the epitome of late 2000s style. Her all-black dress had sequins all over it and she even had an iconic waist belt to give it a little more detail. She opted for a dark smokey eye and kept her hair down in natural curls. The look was very different than her more recent red carpet styles.

Her look might be completely different from she what she's seen wearing today, but her facial expressions stayed the same. Looks like she was perfecting her iconic tongue-out look since the beginning.

Just in case you forgot, this is what she wore to the 2015 VMAs. It's just a bit edgier than her first look, but still very cool

The makeup she choose was also pretty different. Instead of a smokey eye, she opted for red lip and bright blue shadow. Actually, it looked a lot like a 2008 trend.

Cyrus has come a long way since her first VMAs to say the least. I can't wait to see what she wears to this year's event!

More like this
Hailey Bieber Looks Like An Old-Hollywood Bride At The Met Gala
By Dominique Norman
Doja Cat Wore Surrealist-Inspired Schiaparelli To The BBMAs
By Dominique Norman
Machine Gun Kelly Wore A $30K Diamond Mani To The BBMAs
By Paris Giles
How To Master Baby Braids, According To TikTok
By Tomi Otekunrin
Get Even More From Bustle — Sign Up For The Newsletter