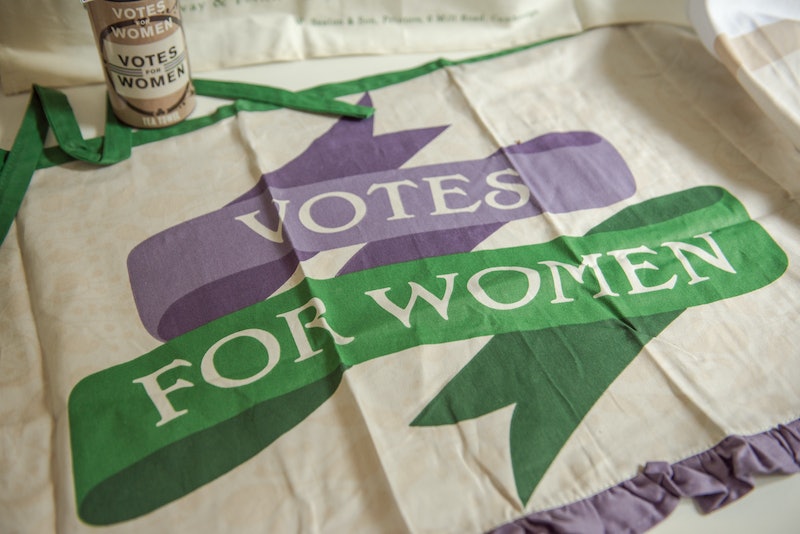 During her short time as a candidate for the Republican presidential nomination, Carly Fiorina released an ad, "Faces," that had some Democrats scratching their heads. Over soaring, hopeful music, she declared that the Republican Party is "the party of women's suffrage." On its face, this seemed like bad history: After all, Woodrow Wilson, a Democrat, was president when women were finally granted the right to vote. I must admit I was particularly surprised, then, when Glenn Kessler of the Washington Post fact-checked Fiorina's claim and declared that she was correct: Republicans were the party of women's suffrage.

Of course, this information is less surprising when you consider the Republican Party of the 19th century instead of the Republicans of today: During and after the Civil War, the GOP had aggressively advocated for the 15th Amendment, which granted voting rights to black men, and as a result the newly enfranchised black voters flocked to the Republican Party.

A key distinction emerged between the two parties, in part because the Republicans were the party of the Reformation, with the most radical wings of the party working to end segregation and establish racial equality under the law. In contrast, 19th-century Democrats in the South often worked feverishly to reestablish white supremacy. White suffragists had often worked alongside abolitionists with the intention of enfranchising both groups. However, as Mallory Ortberg of the Toast notes, a number of white suffragists were as guilty of racism as their male counterparts.

In spite of this, male Democrats, particularly white supremacists, were suspicious of women's attempts to gain the vote. A Democratic Georgia state senator claimed that suffragists sought to "put the black heel on the white neck and place the southern negro in power," and Democrats remained wary of extending the franchise to women.

Some Democrats, fortunately, also came around. President Wilson, whose support for the issue was tepid at best, came around to full support of women's suffrage in part because because of a series of protests, including hunger strikes.

But it was Republicans, not Democrats, who really pushed the movement for suffrage. The first attempt to introduce what became the 19th Amendment into law came from a Republican, Aaron Sargent of California, though it was quickly buried in committee and eventually defeated. The 19th Amendment finally passed both houses despite a filibuster by Democratic senators. Georgia Sen. Ellison Smith, a Democrat with a stomach-turning history of racism, aggressively opposed the 19th Amendment, saying, "The Southern man who votes for the Susan B. Anthony amendment votes to ratify the 15th Amendment."

Politicians like Smith did not long remain Democrats. In the 1940s, the most vehemently anti-integration wing, the Dixiecrats, splintered off and worked to promote segregation. Because of the Dixiecrats, many black women who were ostensibly enfranchised by the 19th Amendment were not actually able to vote until the voting reforms of the 1960s. By that point, however, many in the remaining wing of the Democratic Party supported racial and gender equality, and those civil rights reforms passed under Democratic President Lyndon B. Johnson.

There you have it: Carly Fiorina was correct. Motivated largely by racism, many Democrats of the 19th and early 20th century resisted any extension of the franchise. The GOP can be rightly considered by history as the party of women's suffrage.