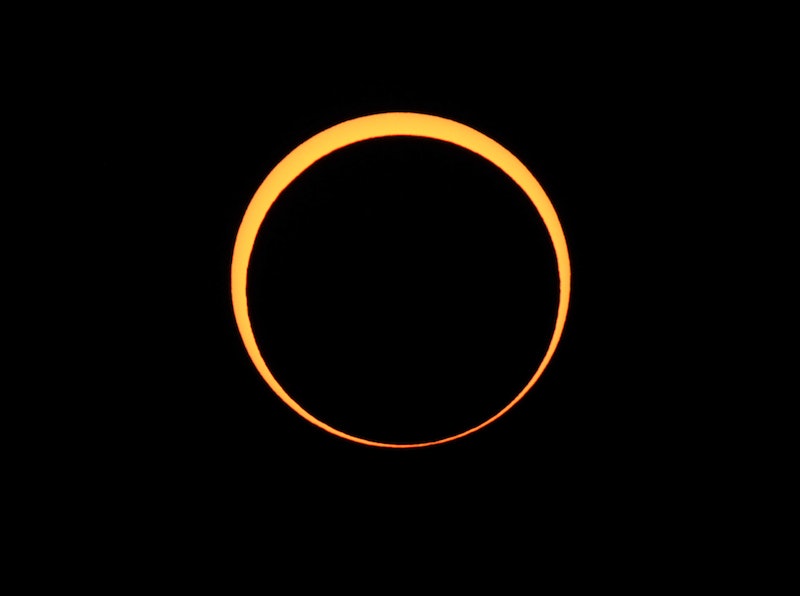 An annular solar eclipse is a type of partial eclipse that happens when the sun and the moon come into alignment, with the moon standing directly between the Earth and the sun. However, because of where the moon is located, it's unable to fully block the view of the sun from Earth. This creates a bright ring around the edge of the moon called an annulus (hence the name "annular eclipse") —but colloquially, it's often referred to as a "ring of fire."

So how is it that the moon can align with the sun but still not block it? It has to do with where exactly the moon is in its orbit. You see, the moon doesn't orbit the Earth in a perfect circle. Although its orbit doesn't vary too much in distance from Earth, it is closer to Earth at certain parts of its orbit than others. And during an annular eclipse, the moon is at the point known as the apogee, the point at which it is furthest from the Earth.

This means that it's far enough away (and thus appears small enough from Earth) that it can't quite block out the view of the sun from Earth, even though it will be standing directly in front of the sun.

So how far away exactly is the moon during the apogee? It can vary a little, but in general, the moon is about 250,000 miles away at its apogee. By contrast, when the moon is at its perigee or closest point, it's only about 230,000 miles away. Which can make a big difference in terms of visibility.

So there you have it. During an annular eclipse, the moon is still between the sun and the Earth, and is lined up just like it would be during a total eclipse, but it's also too far away to block out the sun completely. The result will be a stunning "ring of fire" visible mostly from parts of Africa — but don't fret if you're located somewhere else; it's pretty easy to find a live stream of astronomical events these days, so you might still be able to catch it online. And hey, at least the pictures are always stunning, right?

More like this
How To See The Lunar Eclipse On May 15-16, 2022
By Kaitlyn Wylde
The 6 Best Balaclavas To Keep Your Face, Head & Neck Comfortably Warm
By Jenny White
Here's Your Daily Horoscope For May 18, 2022
By Mecca Woods
4 Things To Do & 3 Things To Avoid This Gemini Season
By Brittany Beringer
Get Even More From Bustle — Sign Up For The Newsletter