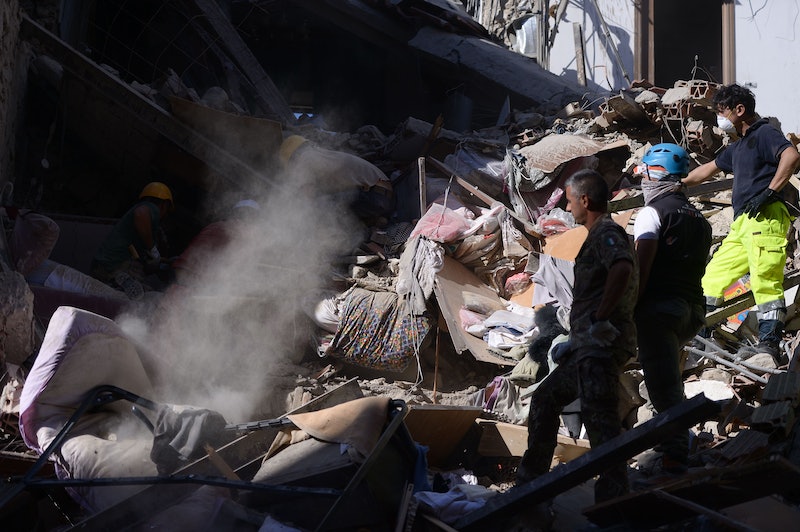 Italian Prime Minister Matteo Renzi announced Wednesday afternoon that at least 120 people have been killed in today's earthquake so far — a significant uptick from the 73 estimated earlier. As rescue teams, volunteers, and locals scramble to help each other amid the piles of rubble and ruin, photographs of the earthquake in Italy have surfaced, revealing just how staggering the damage is. While there are numerous photos and videos, including aerial footage, of the most damaged areas, which are now defined by collapsed structures, images of people affected by the earthquake are even more heartbreaking.

While 120 have been reported dead so far, there are hundreds missing, and thousands of people have been temporarily displaced and/or left seemingly homeless in the mess. The Guardian's latest update reports that an eight-year-old girl has just been pulled out alive from beneath rubble in Pescara del Tronto, one of the three towns most severely impacted in Italy's central region. According to the Associated Press, residents were awakened before dawn due to the strong tremors, and they later likened their local areas to that of apocalyptic scenes "like Dante's Inferno" as they looked around.

Among the people missing are two Afghan refugees and three nuns, reported TIME. Amid all the chaos and uncertainty, rescuers have been on the lookout for survivors, and a photo of one survivor — a nun — has gained attention on social media.

The image, snapped by Massimo Percossi for Italian wire service ANSA (later distributed by the Associated Press), captures the wounded nun checking her mobile phone after the earthquake in Amatrice. She lies near a ladder; it is unclear whether there is a victim under the rug behind her. One of the reasons this image is spreading on social media, according to ABC News, is the look of calm on the nun's face as she presumably tries to reach out for help.

When disaster strikes, photography plays an important role in visually communicating the depths of tragedy suffered. Historically, there's always an iconic image or two which stand out for their visual and emotional intensity. This photograph might be one among many to be remembered for the damages suffered and lives lost in Wednesday's earthquake in central Italy.