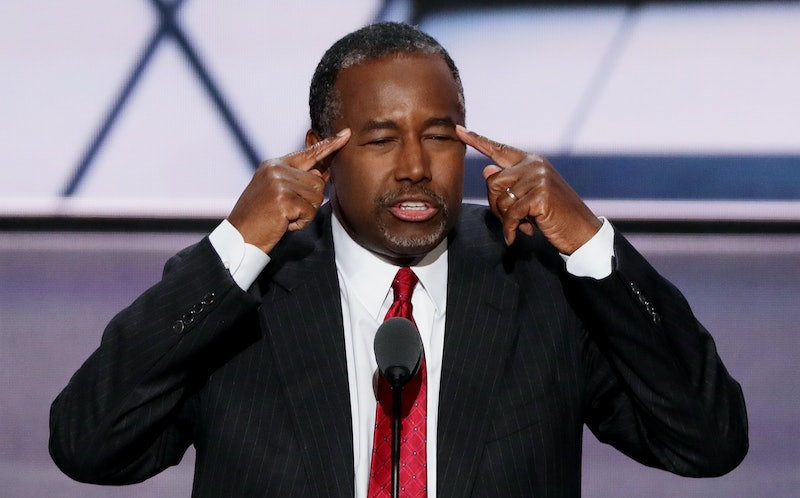 Well, it's that time again — just another episode of the Donald Trump surrogate show! For as many problems as Trump's campaign itself has had over the last several weeks, from the botched and ineffectual Republican National Convention in Cleveland to the dizzying tumble in the polls against Hillary Clinton that followed, a big part of the story has been his habitually inept surrogates, too. And here's the question: is Ben Carson calling for Trump and Clinton's medical records to be released an example of more of the same gaffe-prone surrogacy, or is it a crafty strategic move?

If you're putting money on it, epic fail is probably the safer bet, at least if Carson's recent track record as a campaign surrogate means anything. But what he's getting at is a real issue in the campaign, and not just because the Trump team is trying to spread conspiracy theories about Clinton's health.

The reality is, the public has markedly little information about either of their medical histories. Neither Clinton nor Trump have allowed for a comprehensive look at their medical records — both of them have instead released statements from their doctors commenting on their health. Clinton's physician called her "a healthy female with hypothyroidism and seasonal allergies" who is "in excellent physical condition and fit to serve as President of the United States," while Trump's insisted he'd be "the healthiest individual ever elected to the presidency."

In an interview on MSNBC's Morning Joe on Wednesday, Carson said that Clinton, 68, and Trump, 70, should "absolutely" release their medical records, arguing that the American public should have the right to know when considering whether to vote for an "elderly" candidate. To be clear, it wasn't a point he tried to solely make about Clinton, and then got boxed in by a cagey questioner — he freely acknowledged that his standard applied to "both major candidates" without further prompting.

I think that somebody who is running for President of the United States, particularly if they are elderly, and that would include both major candidates, should disclose their medical history. And I'm not talking about from a year ago or two years ago, I mean currently. ... That again, it's common sense, because as people get older, things begin to happen to them.

Carson also acknowledged that normally, a physician wouldn't attempt to diagnose somebody from afar, the sort of thing that his fellow Trump surrogate Rudy Giuliani has been doing lately. But citing the stresses and "24/7" nature of the job, Carson maintained that both Trump and Clinton should release their medical histories, to give the public a full accounting.

Whether or not you personally agree with Carson's argument, that he applied it equally to both candidates raises an interesting question — does that help or hurt Trump's cause? On the one hand, though his campaign has drawn criticism for some of the increasingly desperate attacks, it has managed to spark some public chatter about the state of Clinton's health, regardless of what the chatterers are actually saying. Considering Trump's well-established love of driving the news cycle, you could easily see him perceive this as a win, if only because the words "Clinton" and "medical records" are still popping up together.

But on the other hand, Carson really did blow his cover. Neither candidate has given a comprehensive accounting of their medical history, but Clinton's doctor letter actually read like, well, a doctor's letter. Trump's was pretty bizarre by contrast, at times hyperbolically praising his health, but in completely vague terms — like stating that his recent exam showed "only positive results," and his lab work came back "astonishingly excellent."

Previously, Trump was benefiting from these sorts of questions and insinuations being focused on Clinton, while artfully dodging much, if any, discussion of his own health and age. Of course, there's no more reason to conclude that anything's wrong with Trump than with Clinton, absent some properly diagnosed or factually reported information to the contrary. But this now hands the Clinton campaign a convenient rebuttal anytime the issue is brought up to them, and that's a blow against Trump in any sense.