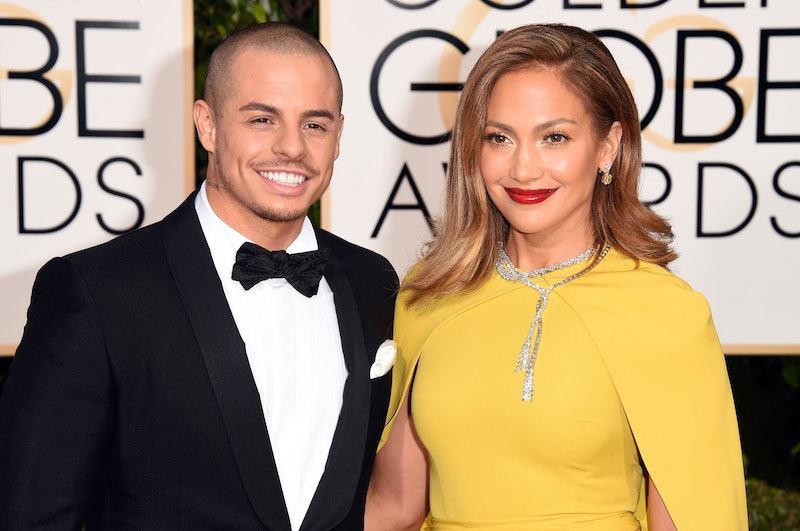 After five years together, People reported Wednesday that celebrity couple Jennifer Lopez and Casper Smart broke up. Reportedly, things ended on good terms, so it's nothing to get stressed about. However, if you were rooting for the 47-year-old actor/singer and the 29-year-old dancer, sorry for the bad news. A source told People they've been broken up for "a few weeks." The insider added, "It wasn't anything dramatic and they were on good terms — it just came to a natural end. They will remain friends and they see each other, but they are not together. It was very amiable." Lopez's rep told Bustle they have no comment; Bustle has reached out to Smart's reps, but has not yet received any comment.

For all those Lopez and Smart shippers out there, TMZ is reporting that while sources close to the Shades of Blue star are saying the split is very much real, sources close to Smart are denying the breakup. It's unclear what is true at this point in time. The two are known for their on-again and off-again relationship, so who knows. I mean, they were spotted at Lopez's Aug. 13 Las Vegas show. If you take a look at the photo, her ex-husband, Marc Anthony, is also standing next to her. I guess that just goes to show you that she gets along with her exes. Plus, this photo was taken before their alleged split was announced.

Whatever the case, it's always a bummer to see a celeb couple to an end. Five years is a long time, even if you are on-and-off.

More like this
Long Live Bennifer!
By Allie Jones
Kaley Cuoco & Tom Pelphrey Just Made Their First Public Appearance As A Couple
By Hugh McIntyre
Natalia Dyer & Charlie Heaton's Relationship Is Still Going Strong
By Allyson Koerner and Sophie McEvoy
The Millie Bobby Brown & Jake Bongiovi Guide To Cute PDA & Red Carpet Twinning
By Bustle UK
Get Even More From Bustle — Sign Up For The Newsletter