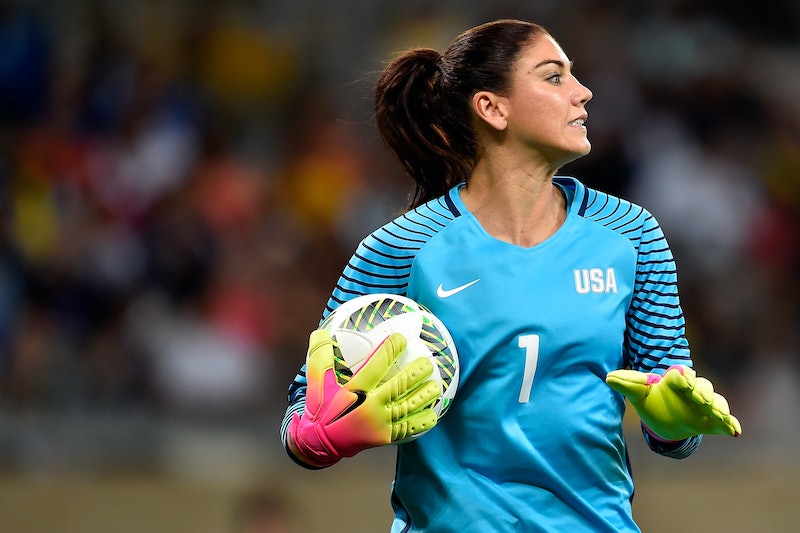 In response to conduct that reportedly went against its principles, U.S. Soccer has suspended goalkeeper Hope Solo from the Women's National Team for six months, effective immediately. According to a statement on U.S. Soccer's official website, Solo was suspended due to comments she made after a match against during the 2016 Summer Olympics in Rio. This decision comes after International Olympic Committee spokesman Mark Adams told USA Today that it was "unlikely" Solo would receive an official IOC sanction because of her comments.

The U.S. women's soccer team was eliminated after a quarterfinal match against Sweden. The game ended in a 1-1 draw, after which Sweden won on penalty kicks, the Los Angeles Times reported. Solo's subsequent comments stirred a great deal of controversy as she offered a scathing criticism of the Swedish team:

We played a creative game. We had many opportunities on goal. We showed a lot of heart. We came back from a goal down. I'm very proud of this team.

We played a bunch of cowards. The best team did not win today. I strongly, firmly believe that.

U.S. Soccer President Sunil Gulati referred to Solo's comments as "unacceptable," and said that they did not meet the organization's expected standard of conduct. "Beyond the athletic arena, and beyond the results, the Olympics celebrate and represent the ideals of fair play and respect. We expect all of our representatives to honor those principles, with no exceptions," Gulati said. "Taking into consideration the past incidents involving Hope, as well as the private conversations we've had requiring her to conduct herself in a manner befitting a U.S. National Team member, U.S. Soccer determined this is the appropriate disciplinary action."

It is not the first time Solo has been suspended. In early 2015, she was suspended from the Women's National Team for 30 days after reportedly being in the passenger seat of a car that her husband was driving while under the influence. At that time, she said, "I accept and respect the Federation's decision, and more importantly, I apologize for disappointing my teammates, coaches and the Federation who have always supported me."

After her comments about the quarterfinal match against Sweden, Solo tried to contextualize what she said on Twitter, and admitted that she wasn't good at losing.

Solo will be eligible to apply for reinstatement to the team after her suspension ends in February 2017, according to U.S. Soccer's statement.