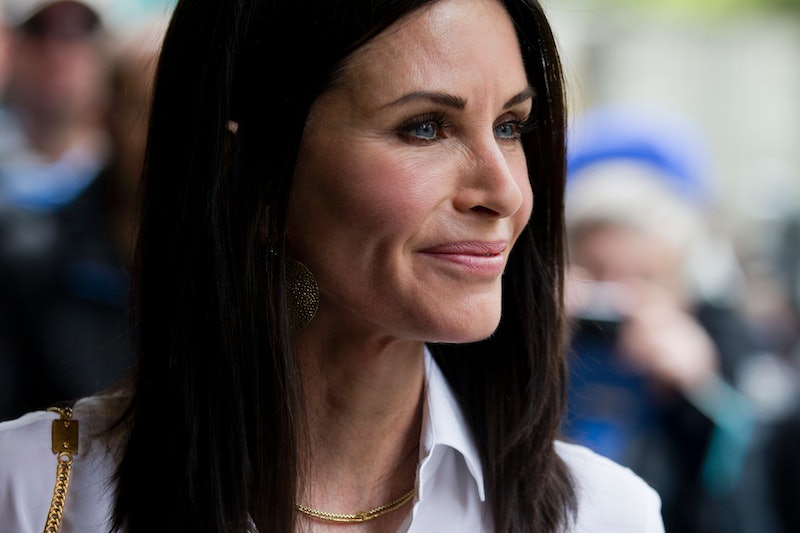 Take it from this aging millennial: Aging is hard. As much as I may have told myself and anyone who would listen when I was 21 that if I ever did one thing right it would be to age gracefully, I didn’t know a thing about aging back then. Not until a mysterious pucker of loose skin started collecting under my left eye when I turned 32 did I start to realize how difficult this whole careening toward middle age might actually be. And more difficult than the careening part — since, like gravity, that is largely out of my control — is the holding back from trying anything and everything to stop time from marching very brutally across my once fine face. So I was impressed to hear that Courteney Cox was taking a whole new approach to aging. Cox talked about it on the upcoming episode of Running Wild with Bear Grylls, and I’m totally impressed by her newfound acceptance.

Because this star got really real about aging and the number of cosmetic procedures she’s had done to slow hers down. Maybe it was the thin mountain air, but Cox didn’t hold back as she discussed how shocked she had been to “look at a picture of [herself] and go, ‘Oh god, I look horrible.’” Of course it’s difficult to hear Cox be so critical of herself, but in an industry and a world where aging women are criticized instead of heralded like they should be, I don’t blame Cox for trying her best to “keep up with getting older.”

But these days, Cox says, her new philosophy is a bit different. “Now I just have a new motto,” the former Friends star said to Grylls. “Just let it be.” And I think that is a motto that is worthy of a serious amen. Not only is Cox’s new motto applicable to all of us as we age and begin to see the effects of time on our bodies, it’s applicable to so many things in life. Growing up, ending relationships, disappointments at work. There are so many things that are out of our control in life and aging is only one of them.

So take a play from Cox’s book: Just let it be. Trust me. Your face and your future will thank you for it.