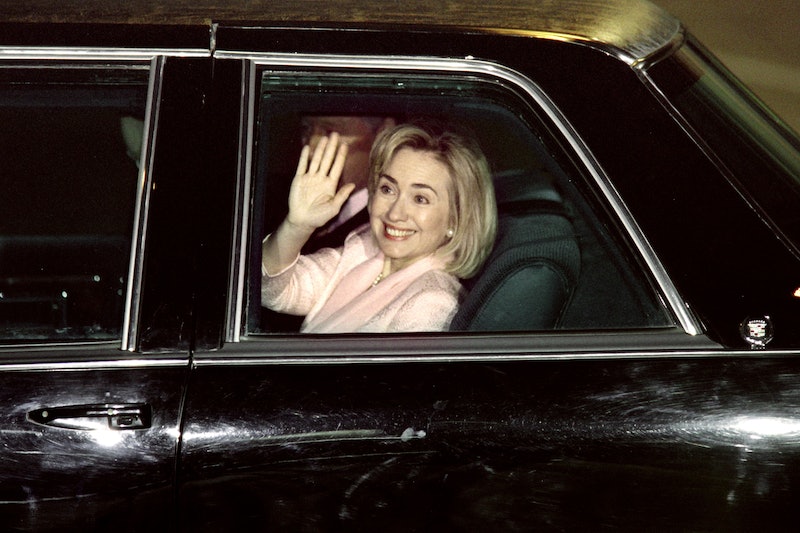 The names are familiar, and the allegations seem so modern — but the dateline is from just over 20 years ago. This 1996 Los Angeles Times article about the Clintons suggests politics haven't changed all that much; from the players, to the supposed scandals, when you read this article, it'll seem like it was written only yesterday.

The article by John M. Broder from January 1996 summarizes the highlights from a report called "The Buying of the President" by The Center for Public Integrity, the non-partisan investigative journalism outfit started in 1989 by Charles Lewis, a former news producer concerned about the lack of solid investigative journalism. "The Buying of the President" was a 271-page tome developed by a team of investigative reporters and data scientists. They went through 16 years worth of campaign contributions and conducted in-person interviews to arrive at their conclusions: forget the Tyson poultry machine, the team claimed that employees and officers of Goldman Sachs represented the largest pool of contributors to Bill Clinton's political aspirations. Now available in blog form for each new election cycle back in the 1990s, the CPI sent a book to press every four years with their findings. But that's not where the déjà vu stops.

The article then points to appointments made by President Clinton while in office that seemed to allege a quid pro quo arrangement with the Wall Street giant, including making Robert Rubin the Secretary of the Treasury, and picking Goldman partner Kenneth Brody to run the Export-Import Bank. In the CPI's report, it was alleged that Rubin and his wife routed $275,000 of their personal funds ($471,688.70 in today's money, according to the Bureau of Labor Statistics consumer price index adjustment calculator) to the New York Host Committee of the Democratic National Committee to help pay for the cost of the 1992 convention, for example.

Rubin was also the inaugural director of the National Economic Council, which was established in 1993 by President Clinton as a way for the President to consider economic policy with a wide variety industries represented at the table. According to data from Opensecrets.org, individuals connected with Goldman continued financing Hillary's political career after her husband left the White House. The Wall Street firm was the second-largest contributor to her New York Senate seat war chest from 2003 to 2008, just one place behind Manhattan giant Citigroup, according to the data.

Towards the end of the article, another familiar name pops up: no, not former GOP senator and sometime presidential contender Bob Dole, but the Wichita-based oil and gas group called Koch Industries. While Charles and David aren't explicitly mentioned by name, their family and business are name-dropped in the LA Times article. The CPI calculated that the Koch family had donated nearly half a million in funds to the then-Senate Majority Leader's political and charitable foundations while new regulations favorable to their petrochemical interests sailed through Congress, sponsored by Dole himself.

So, are allegations that the Clintons have close ties with Wall Street, or that the Koch Brothers like to spend money on politicians, old news? Yes, and no. While this article pretty much proves that not much at all has changed from 1996 in terms of the operatives, or the organizations in the game, that doesn't mean that Americans should be satisfied with the same kind of politics as usual that the country has already tried time and time again. At the end of the day, politicians in a democracy should be held accountable to the people who they represent, not just to their wealthy campaign contributors.

More like this
'The Spy Who Died Twice' Is Based On A Major British Scandal
By El Hunt
What Is Barack Obama’s Net Worth? He Makes *Way* More Now As An Ex-President
By Hugh McIntyre
The 20 Best Audiobooks To Fall Asleep To
By Aoife Hanna and K.W. Colyard
Ed Hardy-Inspired Cross Nail Designs Are Majorly Trending
By Danielle Sinay
Get Even More From Bustle — Sign Up For The Newsletter