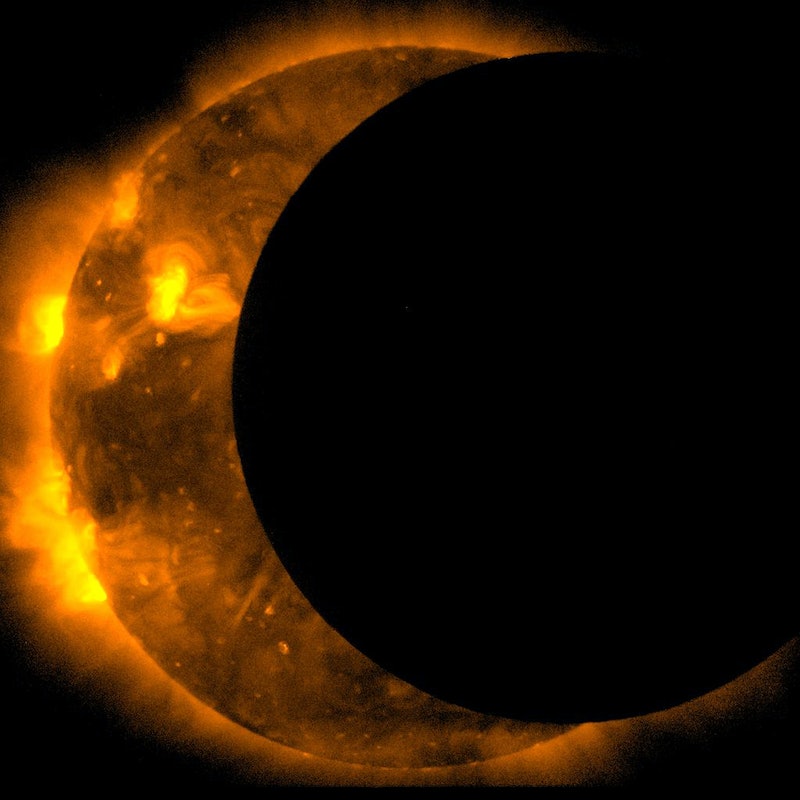 As quickly as all the celestial bodies in the universe move around, some events still occur only occasionally — and we're about to have one of them: A periodic annular solar eclipse. If you were wondering how to watch the annular solar eclipse in 2016, though, it could be either really difficult or really easy, depending on which option you take. But one thing's for sure: You won't want to miss this one, because annular solar eclipses happen only when several complex conditions are met.

To go back to basics for just a second first, what does it mean for a solar eclipse to happen? A solar eclipse occurs when the Earth's moon gets in between the sun and the Earth, temporarily blocking the sun's rays from reaching the earth on the other side of the moon. Because people live all around the globe, some of them will be physically located in this eclipse shadow zone, while others will not. Who gets to be in the shadow zone, and therefore see the eclipse with their naked eye, simply depends on the timing of when the sun and moon line up.

This brings us to your two options for watching the annular solar eclipse in 2016. One option is to place yourself in this year's lucky eclipse-viewing area, namely Madagascar and other parts of central Africa. For some people in the region, the sun/moon eclipse lineup will be straight above them, leading to a perfectly visible eclipse — the "ring of fire" effect for which annular solar eclipses are known. Other inhabitants of the region, however, are far enough afield that they'll only partially be able to see the eclipse; this includes much of the rest of Africa, southern Asia, western Australia, and Antarctica (plus the Atlantic and Indian Oceans in the area). You can check out NASA's map of the annual solar eclipse in 2016 to see the exact path that the eclipse will take this time.

If visiting Africa isn't an option for you this year, you can watch the annular solar eclipse online via Slooh.com (registration required). Though there's no substitute for travel and seeing something in the flesh, watching the solar eclipse digitally sure beats missing the event altogether.

How long does the annular solar eclipse last? Well, it depends on your perspective. The eclipse will move along the African, Asian, Australian, and Antacrtic geographic arc for hours on Sept. 1. But viewers situated at any one location on its path will only be able to see the eclipse for about three minutes from that specific location. The first location that can see the eclipse happening at all will enjoy the show beginning around 2 a.m. EST, and the last location that can see a partial eclipse will see it end at 8 a.m. EST, with the maximum eclipse being viewable from the prime section of the eclipse's arc of travel at around 5 a.m. EST.

Whether you watch the annular solar eclipse in person or online, you can expect to see a stunning "ring of fire" effect. This happens because even when the sun and moon are perfectly aligned, the moon (in front) has a smaller diameter than the sun (in back), so it can't block every last ray. And hey, even if you miss the annular solar eclipse in action, at least we can be sure that the pictures will be spectacular, right?