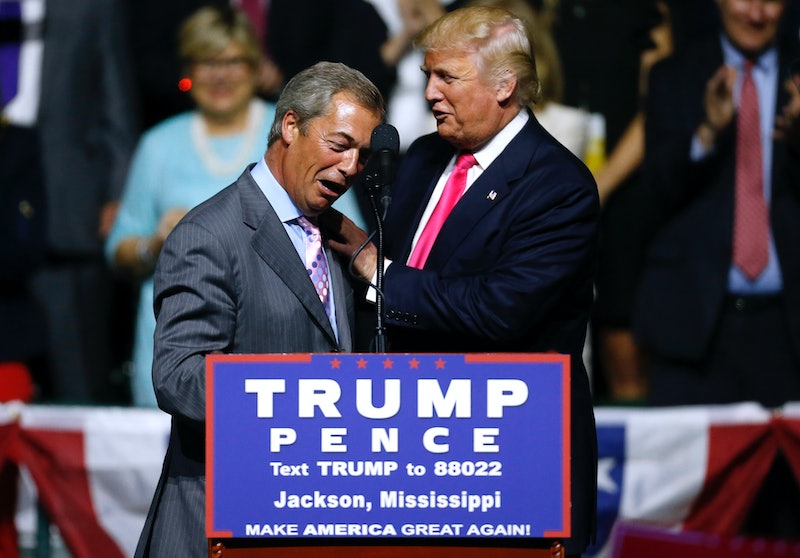 At a rally in Jackson, Mississippi, on Wednesday, former UK Independence Party leader Nigel Farage joined Donald Trump on stage to draw similarities between the Republican nominee's campaign and the U.K.'s vote to leave the European Union. Farage played a key role in securing the Brexit vote, and stepped down as UKIP's leader shortly thereafter. Though Farage said that his "political ambition has been achieved" with Brexit's success, his latest move shows he hasn't left politics altogether. While he technically didn't endorse Trump during Wednesday's rally, Farage has recently taken to criticizing Democratic nominee Hillary Clinton.

Last week, Trump tweeted that people would soon be calling him "Mr. Brexit." Then, at the Jackson rally, he emphasized that point when he declared that this election was an opportunity for voters to "re-declare American independence." This is the same nationalist rhetoric that Farage and UKIP espoused ahead of the Brexit vote; they are not referring to an independence from imperialism but rather from inclusion. Just as Brexit was rooted in anti-immigrant sentiment, so too is Trump's campaign.

Trump introduced Farage as "the man behind Brexit, and a man who led brilliantly the United Kingdom Independence Party," and even though Farage did not explicitly endorse Trump, he still tried to drum up support for him, and had plenty to say about Clinton and the upcoming U.S. presidential election. "I cannot possibly tell you how you should vote in this election," Farage said at the rally. "But you know I get it, I get it. I’m hearing you. But I will say this, if I was an American citizen I wouldn’t vote for Hillary Clinton if you paid me. In fact, I wouldn’t vote for Hillary Clinton if she paid me."

Farage also criticized President Obama for encouraging the UK to remain in the EU, saying that Obama had "talked down" to the Brexit supporters as if they "were nothing."

In order to draw his own parallels between Trump's campaign and Brexit, the former UKIP leader tried to send the audience a strong anti-establishment message by denouncing pollsters, commentators, big banks, and Washington. He urged Trump's supporters to form a "people's army of ordinary citizens" to get out the campaign's message, and to get their "walking boots on" if they really wanted to generate change.

Ahead of the rally in Jackson — which roughly 15,000 people attended — Farage made it abundantly clear that Brexit and Trump's campaign had attempted to attract similar groups of people: those who were disillusioned by liberal government. He told The Telegraph that Brexit had been "a victory for the little people — and if the Trump camp reaches out to those same people who have been disadvantaged by corporatism, under-cutting wages, a lot of strong similarities to the United Kingdom then it does not matter what the polls say, what the liberal media say — in the end elections are won by numbers."

Farage didn't need to say he endorsed Trump. For all intents and purposes, he did, and now the man behind Brexit is trying to generate enthusiasm for a man who's attempting to play off xenophobia in the same way UKIP did just a few months ago. That Farage would share a stage with Trump signifies a global shift to right-wing nationalism, and it's unclear who will actually be made "independent" as a result.