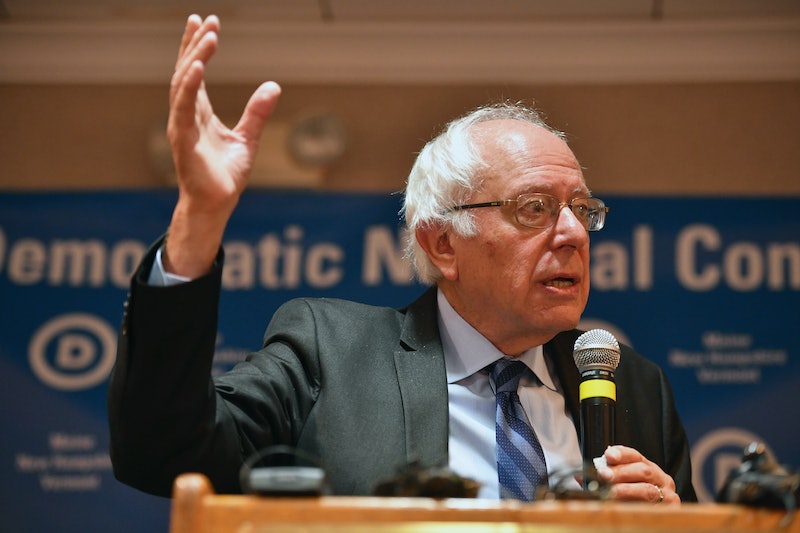 This past Wednesday night, Bernie Sanders worked to continue his revolution. Naming the continued movement "Our Revolution" and building it up over an hour to thousands of people watching at home, Sanders introduced a new 501(c)(4) with a goal to "reclaim democracy for the working people of our country by harnessing the transformative energy of the 'political revolution'” — oddly, those quote marks around "political revolution" come from their website. In any case, the group's main objective is to support progressive candidates in various elections this year. So who does Sanders' Our Revolution support in upcoming races?

There are just over 60 candidates featured on the Our Revolution website. Some of them are running for Congress. There are a number of House candidates, and a few for the Senate too, but the vast majority are running in state legislatures across the country. Only a few names are likely to ring a bell. The most famous is probably Russ Feingold, who is running as a Democrat in the race to replace Wisconsin Republican Sen. Ron Johnson, who was elected in the GOP midterm wave of 2010. He has gotten a bit more press coverage as of late for his advertisements which attack Johnson's out-of-touch student loan comments.

Each of the candidates has a small bio page so that you can understand why they are worth supporting. You can read about everyone from Carmen Yulin Cruz, who is running for reelection as mayor of San Juan, Puerto Rico, to Minnesota state representative candidate Ilhan Omar, whose family fled Somalia's civil war when she was eight. There should be more added as the election season carries on. NPR reported that Sanders indicated that as many as 100 candidates and seven ballot initiatives would be supported.

During Sanders' speech Wednesday night, he name-dropped a few candidates, Feingold included. But there was one name that he left out that drew some attention: Tim Canova. He's running in a Florida Democratic primary against former Democratic Party Chair Debbie Wasserman Schultz, whom Sanders accused throughout the presidential primary of being biased toward Hillary Clinton. A Russian email hack eventually proved some of his suspicions right.

Canova was endorsed by Sanders back when the then-presidential-candidate was in the thick of it with Wasserman Schultz. Since then, he and the Clinton campaign have made peace, and he has spoken on her behalf — particularly against Donald Trump. Now, Canova said he wonders if he has been forgotten about. He said that Vice President Joe Biden and Clinton have campaigned with Wasserman Schultz. Canova explained his feelings on The Young Turks, a progressive YouTube channel:

We have nobody coming here to campaign for us. When Bernie endorsed me, he called me up, gave me his number, and said, ‘Stay in touch and please call.’ And I have. And I’ve been waiting for Bernie to return my call ... It might be that he put his faith and trust in the Clinton camp, and thought that ours was a race to sacrifice.

The Washington Post reported that a Sanders spokesman hasn't said one way or the other if Sanders will end up campaigning with Canova. He is still listed on the Our Revolution page. Canova's bio says that he is a "frequent commentator on the rigged economic and political systems that put Wall Street and multinational corporations first while leaving ordinary Americans behind," before adding, "Tim is uniquely positioned to shake up Congress."

This was not the only controversy leading up to Wednesday's announcement. Politico reported Tuesday that about half of Our Revolution's employees quit this week. Their main complaint was that Sanders' campaign manager, Jeff Weaver, was announced to lead the new group, and they don't like direction he's taking. "It’s about both the fundraising and the spending: Jeff would like to take big money from rich people including billionaires and spend it on ads," Claire Sandberg, Our Revolution's organizing director told Politico after she quit. Weaver has not commented.

For now, Sanders' endorsement will still hold big sway over many progressive Americans. Stay tuned to see how Our Revolution works into the senator's blueprint for a "political revolution."