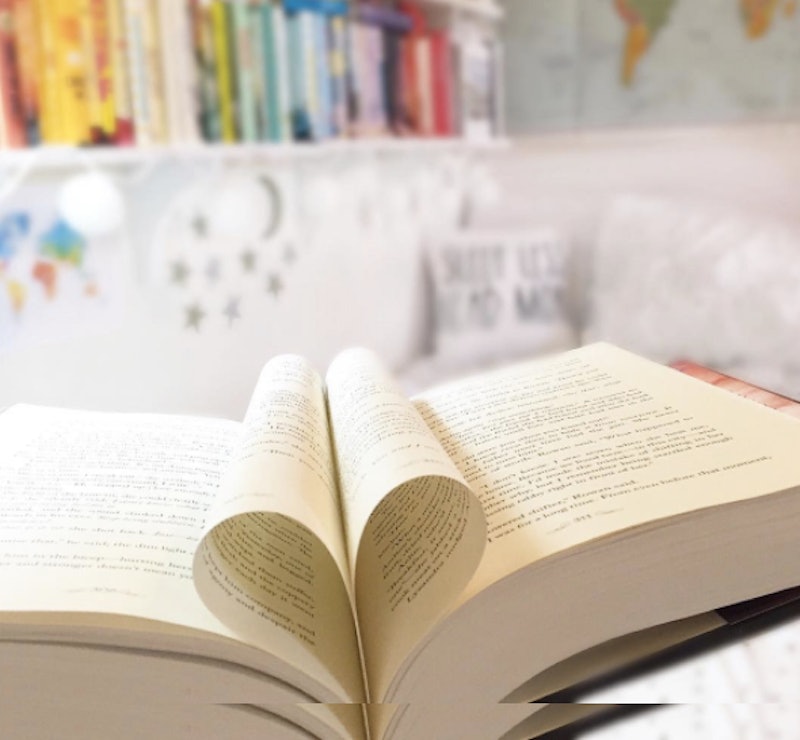 I was in my final year of undergrad when I consciously decided to start reading romance novels. I’d been fascinated by them since I was about 11 years old; my local public library kept a shelf of Harlequin paperbacks right next to the Young Adult section, in what I now believe was a fairly canny move. I would wander over after I’d picked up the latest “Bloody Jack” pirate story or Alex Rider thriller, and read the titles and gaze at the generically attractive, elaborately costumed couples on the covers and still be too shy to actually read one.

The Greek Tycoon’s Reluctant Bride, The Sheik’s Secret Love, Warming the Cowboy’s Cold Heart — to my 11-year-old mind, these titles sounded absolutely thrilling. By the time I got up the nerve to actually read any of them, I was slightly disappointed. What I’d made up in my head was often more exciting, and occasionally racier. But even though I’d only read a few titles, I still loved the genre — the mix of excitement and comfort, the way they could take you for a ride full of sharp corners and sudden drops, and then set you back down as gently as a kiss. And so, in 2012, I began my quest to Fall In Love With Romance Novels.

But even though I’d only read a few titles, I still loved the genre — the mix of excitement and comfort, the way they could take you for a ride full of sharp corners and sudden drops, and then set you back down as gently as a kiss.

There were a few reasons for making romance novels my new hobby, but two stuck out as most important. The first was that I had recently acquired an e-reader. As you may know, there are a lot of free romance novels available out for e-readers. And as a poor undergrad with a lot of downtime waiting for flights at Christmas and spring breaks, reading romance novels sounded like a perfect interest that was free, fun, and would keep me occupied in the event of a two-hour delay at the Detroit airport.

The second was that in 2012, the Fifty Shades of Grey hullaballoo was in full swing. So naturally, I had to check out this Fifty Shades business—I was especially curious because, as a former fanfiction writer myself, I wanted to see if I could spot any common fanfic techniques and tropes in what had once, famously, been an Alternate Universe Twilight rewrite.

As it happened, Fifty Shades was probably my absolute least favorite item in my Quest for Romance. But reading it was my gateway, via her hilarious recaps, to Jenny Trout’s romance novels, which I adored. Meanwhile, combing Amazon’s collection of free romance ebooks had opened up the wide world of historical romance, and a gift from a friend had shown me how much fun a good paranormal bodice-ripper could be. I learned about a few of the sub-subgeneres you wouldn’t necessarily expect but seem to crop up everywhere (Can we please come up with a term for the many and varied romance novels involving Scotland? Kilt-rippers?). And slowly, I began to learn my absolute must-haves for romance novels.

You see, after you’ve read a few of them, you begin to realize that tracking down the “right” romance novel is like tracking down the perfect midsummer sundress. You go in with an idea of exactly what you want, but obviously no one’s created the exact thing you’ve envisioned in your head, so you find which parts of what you want are must-haves, and which can be negotiated on. For instance, maybe you wanted cap sleeves, but three-quarters will do, because it’s in the exact shade of blue you had in mind. Or maybe you wanted a time-travel story, while this is just a straight-up historical romance, but the characters have the exact slap-slap-kiss dynamic you’d been craving.

You see, after you’ve read a few of them, you begin to realize that tracking down the “right” romance novel is like tracking down the perfect midsummer sundress. You go in with an idea of exactly what you want, but obviously no one’s created the exact thing you’ve envisioned in your head, so you find which parts of what you want are must-haves, and which can be negotiated on.

I know I’m worse than most about this one. I’m honestly downright unfair, and I’m willing to admit that. But I’m a historian, and I can’t help it. If your novel is set in Regency England and you have respectable young women living alone and going out on the town unchaperoned, it takes me out of the story. I just can’t shut that part of my brain off. In fact, I was probably reading this novel as a break from researching history; is it any wonder I’m still mentally fact-checking?

To be fair, this is why I love paranormal elements in my historical romances. OK, yes, during World War II a young woman who joked about her “string of past lovers” with the other girls at the munitions factory would most likely be shunned, but if she’s also a witch, eh, whatever, maybe she put a spell on them or something. I can dig it. Well, of course the self-made American tycoon in 1901 has a lengthy and anachronistic French surname — he’s a vampire! He was probably French royalty a few hundred years back. Groovy.

Now, let me get this out of the way: I am not a fan of Christian romance novels. I’m not a Christian myself, and it’s just not something I’m interested in. And that’s okay—it’s fine for other people to enjoy a genre I’m not into. But what really makes me crazy is when books marketed as secular romances have heavy-handed religious motifs or messages in them. It’s one thing to write and market something as a “religious romance novel,” and another entirely to try and cram ham-fisted ideological sentiments into your story and hope your readers don’t notice.

Nicholas Sparks is one of the worst offenders for this, at least what few of his books I’ve read—it seems like every other character is monologuing about the importance of their Christian faith, all while the author is pretending that there’s absolutely nothing religious going on here (Sparks also claims he doesn’t write romance novels, he writes “love stories” and that’s different. Excuse me while I bash my head against something blunt and hard). Incidentally, I’ve read Sparks’ one and only attempt to write about Jews, and as a Jewish woman, I thought it was an absolute mess.

Maybe the biggest issue is simply that the writing is usually pretty shoddy, as if the author just wants to plop some ideology in front of you and run back to the plot. After all, some of the most beautiful and romantic bits of War and Peace also have deeply religious themes—it’s just that they’ve been skillfully integrated into the writing, instead of being a morality hit-and-run.

This is the biggest one for me—be it a historical romance or a contemporary one, with werewolves and ghosts or corporate espionage, this is where I draw my absolute line. If you want me to enjoy your romance novel, your protagonists must, in addition to explosive chemistry or searing devotion or whatever, actually like each other, and I must like them. They don’t have to start out that way — I like a good enemies-turned-lovers story as much as the next girl — but if you want me to believe in your love story I must believe that these people could spend days happily watching television or cooking a meal and enjoying each other’s company, and that, were I to join them, I’d find them charming rather than insufferable.

That was one of my biggest problems with Fifty Shades, actually. Along with the much-discussed consent issues, I just did not buy that these two people enjoyed spending time together. Every conversation they had was either a fight, an exchange of sexual innuendo, or both. When I read Jenny Trout’s The Boss , which is in many ways the corporate erotic romance Fifty Shades should have been, it was like a firework went off in my head — that’s it! That’s what I want! These characters like each other! They have jokes! They enjoy each other’s company even when they’re not doing anything sexy!

Genuine affection, warmth, friendship, and non-erotic pleasure are surprisingly hard things to find in romance novels, actually. It’s the reason I, despite popular opinion, like Alexander McCall Smith’s Emma far more than Eligible, Curtis Sittenfeld’s celebrated Pride and Prejudice reboot. McCall Smith seems to genuinely like his admittedly ridiculous characters more than Sittenfeld, and builds up more genuine affection, if not erotic heat, in the book. It’s also why Beatrice and Benedick are a vastly superior couple to Hero and Claudio in Much Ado About Nothing , because at least Beatrice and Benedick talk to each other and seem to enjoy it, but that’s just common knowledge to anyone who had to read the play in high school.

As it happens, that last one is, in my opinion, an important thing to keep in mind when it comes to what you will and won’t compromise on in romance, not just romance novels. Maybe he doesn’t share your hobbies; maybe you hate her taste in music. Maybe they’re different from anyone else you’ve ever dated, and that feels a little weird. These are things to think about, and decide if they’re compromises you can make or not. But whether you genuinely enjoy someone’s company? Whether you’re happy spending time with them, even when you’re not doing anything special? There’s no compromising on that. That’s what romance is all about.