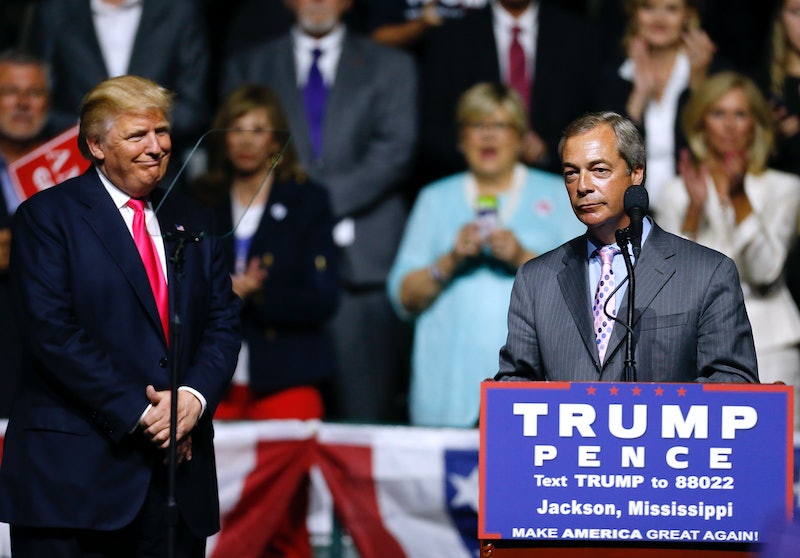 Remember how Britain shocked its own citizens and voted to leave the European Union? At the time, many suggested that Americans take the vote as a warning that something as ludicrous as electing Donald Trump for president could actually happen. Now, one big Brexiter (as the supporters of leaving the EU were called) has come to America to make it a reality. While he was addressing a pro-Trump crowd, it was evident that Trump's supporters didn't know who Nigel Farage was. And the scariest part is that they also didn't know what Brexit is.

Farage flew over to speak at a Trump rally Wednesday night in Mississippi. His comments had the crowd cheering, but without context, they couldn't have known why his British "independence day" rhetoric was, well, a little awkward. Farage tried to share "a message of hope and optimism": If "the ordinary and decent people" stand up for their values, there's no stopping them. Said Farage:

But of course, that's all a very biased view of a pretty serious event. The problem is that Trump supporters didn't know that. The Guardian reported that "eight in 10 people had never heard of Farage or Brexit" when they did a survey of the room before the speech. One woman told the paper, "He’s from the Brits. That’s all I know."

Just in case you didn't know, Brexit has been and will be terrible for the United Kingdom. Economic uncertainty sent the pound plunging against the dollar to the lowest levels in three decades. Some of the most recent numbers from the U.K. economy are not quite as dire as predicted, but the government hasn't even begun the exit process yet, so there's time for things to get much worse. Economists almost universally predict it to be bad.

Additionally, there are the British young people who are having their futures rewritten by the votes of the elderly. And of course, the rise in racist and xenophobic attacks since the vote has been awful. All in all, Brexit is not something to celebrate. But Trump's crowd had no idea. Even if they would agree with some of the anti-immigrant rhetoric of the move, you'd like to think they wouldn't be peachy keen on the rest of the economic implications.

The bogus platform on which he's basing his support for Trump — that he somehow empowered the everyday Brit to stand up and win independence from the special interests controlling the U.K. — is just not true. But Trump supporters didn't know that. If they did, maybe they'd see Trump is not the answer to solving economic stagnation in the white working class.