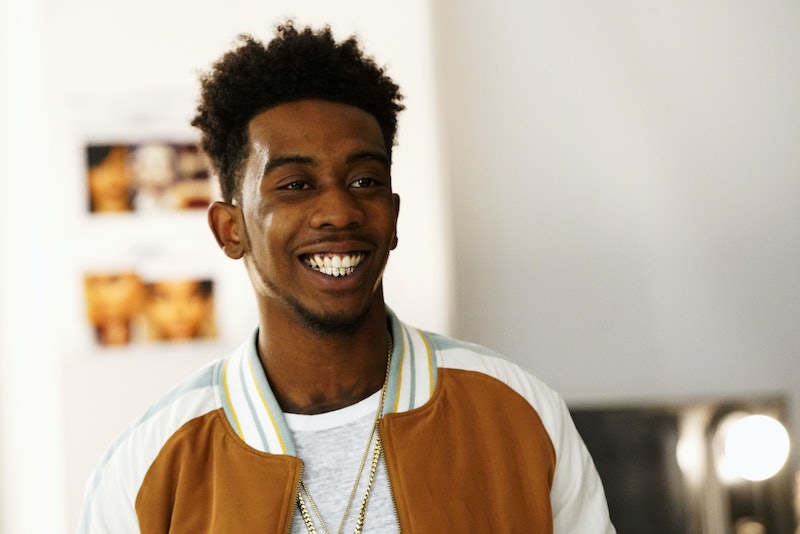 If you're as obsessed with Kanye West's latest release, The Life of Pablo, as the rest of the world, chances are the album introduced you to Desiigner. West sampled his song, "Panda," on the track "Father Stretch My Hands Part Two," and since then, Desiigner's single has become a massive success — so much so that it helped score him a nomination for Best New Artist at the 2016 MTV VMAs. But since he's still pretty new to the music industry, you probably have a lot of questions about him... like what Desiigner's name means. And interestingly enough, there's a pretty cool story behind it.

It's probably not too shocking to find out that Desiigner isn't his actual given name, and according to Billboard, it's not even his first stage name, just the one that stuck. Desiigner was born Sidney Royel Selby III and was known as Designer Royel when he was first trying to break into music. While it's unclear why he chose "Designer Royel" — other than the fact that Royel is his middle name — we do know the rest of the story. Eventually, his sister convinced him to drop his middle name, add an I, and go by Desiigner, and it looks like she was right! It's awesome to hear that he has such strong ties to his family... and that he probably owes his sister big for that stroke of genius.

And his given name has some pretty cool muscial family ties, too. As Billboard adds, Desiigner's grandfather, Sidney Selby, is a blues musician himself who recorded music under the name Guitar Crusher with a career spanning over 40 years. Pretty impressive, right?!

And now, that influence has led him to being signed to West's label, GOOD Music, and topping the charts, so maybe it's just in his blood.

Desiigner is up against some tough competition in the Best New Artist category — like Lukas Graham and DNCE — but between "Panda" and "Timmy Turner," the 19-year-old has already gained a huge following. Maybe we'll see him swipe up a moon man on Sunday night? Fingers crossed!