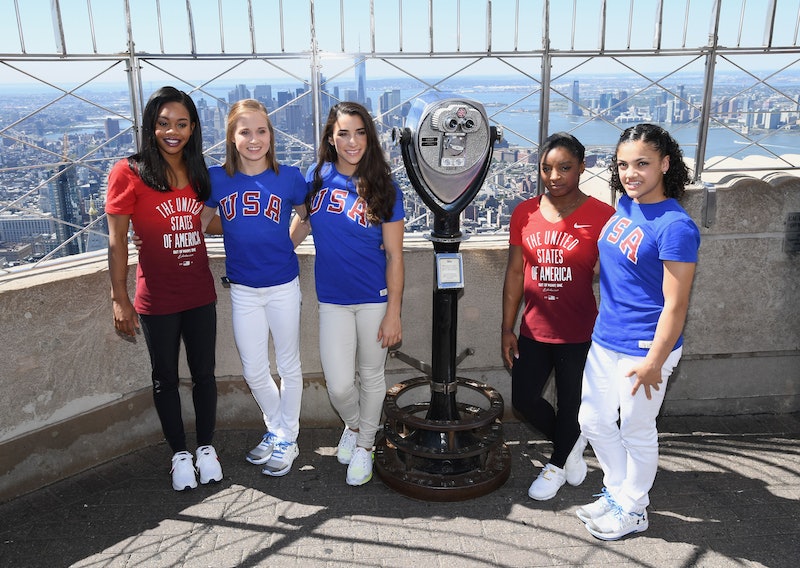 What do you do after winning gold at the world's biggest sporting event? Head to New York City to celebrate. That's what the Team USA women's gymnastics team is doing at least (following a few days of beach time in Rio). This week, they have been photographed atop the Empire State Building, but the real highlight for the team seems to be a trip to see Hamilton, the award-winning Broadway musical. Team USA gymnasts saw Hamilton Tuesday night, and the cast was just as starstruck as the gymnasts.

The whole team was there, the Associated Press reported. Hamilton, if you don't know, was written by Lin-Manuel Miranda to tell the story of American founding father Alexander Hamilton, who was the country's first Secretary of the Treasury. There's quite a bit of hip hop, and it's a fresh telling of history for a contemporary audience. Simone Biles, Aly Raisman, Gabby Douglas, Madison Kocian, and Laurie Hernandez all approved, offering the musical theater version of a "10": a standing ovation.

Gymnastics is my favorite Olympic sport, hands-down. Since the days of Kim Zmeskal, I've been about the U.S. gymnastics team. So, I love these ladies. I'm so proud of them. I worship them. I think they're amazing and I got so hyped when I heard they were in the audience tonight

The gymnasts were already familiar with the music, as Rhonda Faehn, senior VP of USA Gymnastics' women's program, told AP. Evidently, one of the coaches would play the soundtrack for the team in Rio. "It was just meant to be," she added.

Hamilton has also drawn attention for its multicultural cast. Many non-white actors play white historical figures. The women's gymnastics team is perhaps the most diverse ever: black, white, Latina, and Jewish. That wasn't lost on the Hamilton cast. "They're just like tiny versions of us," Okieriete Onaodowan told the AP. That makes a lot of sense, given Miranda's comments to the New York Times in 2015: "Our cast looks like America looks now, and that’s certainly intentional." So does the Final Five.

After the show, the cast posed for photos with the gymnasts, and it's hard to tell who was more excited. Onaodowan also offered his praise. "It's amazing but it's also remarkable what they're doing, just to be able to perform and not choke under that pressure. At a young age, to be able to perform that way and keep your cool? I'm totally impressed," he told AP. You're not alone, Onaodowan. I think it's safe to say that all of America is impressed too.