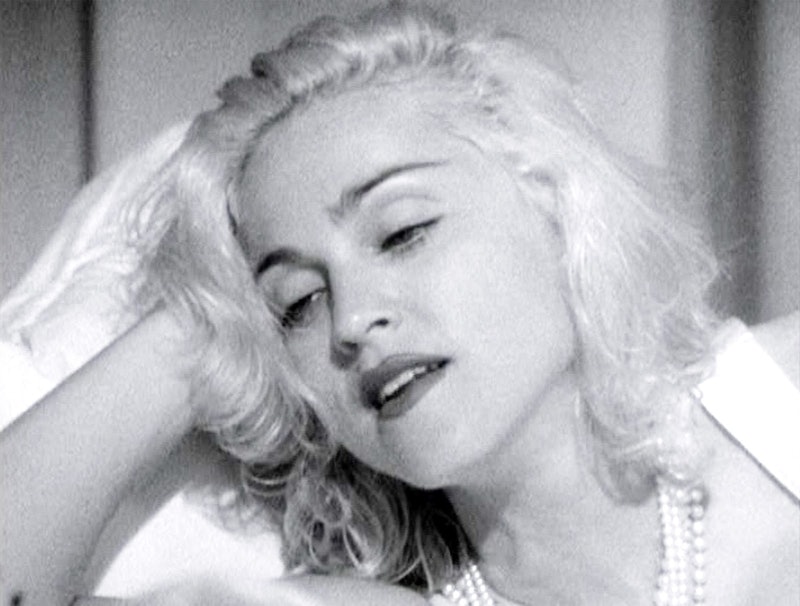 In an age where social media, reality TV shows, and music documentary movies feel ubiquitous in providing fans with intimate access to their idols, it's easy to forget that celebrity personas were previously much more private. So when Madonna's Truth Or Dare documentary movie (also known as In Bed With Madonna) was released in 1991, it felt truly revolutionary and fresh. Once upon a time, fans only had interviews, newspaper gossip, and magazine profiles to rely on in gaining insight on their favorite stars, and often these impressions still felt stilted, and pre-programmed. But, chronicling Madonna's seminal Blond Ambition tour, the movie provided an intimate glimpse at the pop star and her life. The movie pulled back the curtain of celebrity to reveal both Madonna, the artist, and Madonna Louise Ciccone, the person.

25 years on from the movie's release, which saw it gaining a cult-status amongst fans and the queer community, the film remains deeply inspiring, and its legacy can be felt right across pop culture. The movie managed to make an impact, not just in transgressing the boundaries between a celebrity and their fans, but also in providing a crucial reminder of how pop music, and feminist and queer rights, have developed since the early '90s.

This seems rightfully shocking to us in 2016, particularly when we have artists like Nicki Minaj, Lady Gaga, and the electro-pop artist Peaches using hyper-sexual imagery and choreography within their live shows and music videos. But, at the start of the '90s, it was still deemed deeply inappropriate, criminal even, for a female musician to proudly own her sexuality and to portray an expression of it on stage or in their videos.

In Truth Or Dare, Madonna is shown as defending her performance confidently and passionately. During a press confidence, she delivers a speech so clear and calmly formed that she could as well be a politician addressing her country. However, behind the scenes she's shown clearly crumbling slightly under the pressure of it all, with Madonna narrating the line, "around half way around Europe, my bubble burst," before we witness the chaos of the press conference. In front of a swarm of press and flashing bulbs, she states,

My show is not a conventional rock show, but a theatrical presentation of my music. And like theatre, it asks questions, provokes thoughts and takes you on an emotional journey. Portraying good and bad, light and dark, joy and sorrow, redemption and salvation. I do not endorse a way of life but describe one, and the audience is left to make it's own decisions and judgements.

The problem with press conferences is that, though news outlets can report what a celebrity says, they can also take those words out of context or report about them with a specific bias. What Truth Or Dare provided was the chance for Madonna to have agency over her performance, her right to deliver it, and her opinions on why it should be considered with the same thoughtful analysis of any art or show. By presenting the performance within a movie, the content of the show was given an even bigger platform and the chance for her tour to be watched by fans at home or in the cinema. Like the show itself, Truth Or Dare managed to ask questions and provoke thoughts about society itself that frames the film well beyond being your average music documentary.

But the movie was also refreshing for how it didn't only focus on Madonna. It also gave the backing dancers of her tour, who were mostly gay men, a great deal of presence on screen. Though many of their interviews ultimately concern Madonna and their relationship with her, the dancers are crucially (and rightfully) framed as being an important part of the tour, and of Madonna's life. Their sexuality isn't something that is shied away from in the film, but is something that is actually positively portrayed and even celebrated.

As Truth Or Dare director Alek Keshishian explained in an interview with the New York Times, this was an artistic decision that felt organic, not only for the time the film was made, but also in filming Madonna's life:

I felt instinctively that I wanted to get across how in Madonna’s world homosexuality was just a fact of life. These dancers, who she felt so close to, they were going through that age of AIDS. There was still so much stigma against it. I felt personally the power of putting that out, but I had no idea that it might resonate with others quite the way it did.

The film remains something of a classic within queer communities, and, as someone who has never felt comfortable or welcome within default, heterosexual scenes, the movie definitely struck a chord with me as a young teenager for this very reason. This was where I belonged — somewhere where all expressions of sexuality where not only accepted, but where they were allowed the freedom to be expressed and projected as big and as bold as possible. It was positioned with a rightful sense of normality and the utmost respect, providing visibility to the gay community at a crucial time in LGBT awareness.

Truth Or Dare was ahead of its time in many respects. In terms of content, ideas, and approach, it was raw and honest, it never felt cynical (and still doesn't), and it helped raise vital questions about culture and society that were crucial for the time it was made. Sure, we have music documentaries now like Katy Perry's Part Of Me and Justin Bieber's Believe, but few master the same raw, uninhibited vitality of Truth Or Dare.

With celebrities openly sharing snapshots of their personal lives on social media, it's doubtful that we'll ever see a music documentary make the same visceral impact that Truth Or Dare did. But one things for sure: its legacy remains to make an impact, and its influence helped change the pop music industry for the better.