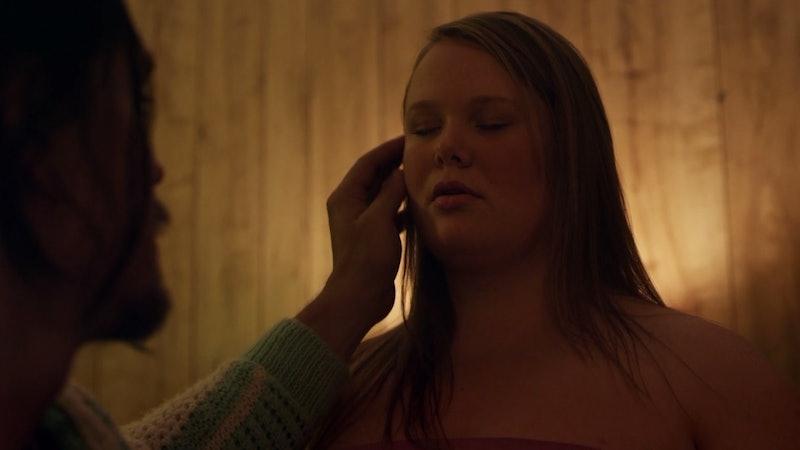 Films about plus size experiences are far and few between, which is why whenever a new one comes along, I inevitably lose my mind. When I heard about Love On The Run, a new film that cast an actual fat person as the main character, I was elated. It's not just because I get to to see a rom-com with a fat person as the love interest, either. What makes this film really special is that it stars a plus size woman without a stereotypical plus size narrative — that is, one that limits the character to hiding, shrinking, or disappearing altogether.

Jen Ponton, who previously appeared in Orange Is The New Black and The Unbreakable Kimmy Schmidt has the lead role in Love On The Run, directed by Ash Christian, playing a character who is focused on seizing opportunities in her life.

The film has all the trappings of a typical rom-com: A dysfunctional but lovable family, a twist, and, of course, a sex scene. The main difference between this and most rom-coms is that the lead is played by a plus size woman. It sends the message that all the intimate, humorous, and personally difficult moments faced within a real relationship also happen in relationships where one or both partners is plus size. Sure, the film cashes in on the trope of small town girl looking for something bigger, but this small town girl isn't small and doesn't want to be, either.

Sadly, it's far more common for a film to initially feel revolutionary by using fat characters, only to then make their fatness the driving force of their plot and personality.

Take, for example, the character of Rosemary in Shallow Hal. Sure, she might stay fat and in love in the end, but the entire film is centered around her fatness, often making it a punchline. In Love On The Run, however, Ponton's character's fatness has little to do with the story. In fact, it's hardly even mentioned at all.

I spoke to star of the movie Jen Ponton via email about the politics of being plus size in the film industry and in the rest of the world, too. For Ponton, it was important that the story feature a fat character without reducing her to her fatness.

"I think it's immensely important," she tells me. "Because, in entertainment, [a fat character's] body is always 'in the way' of them being a lovable, fully-human character. Whether it's played for grotesque effect or just something that their character hates and tries to disown, there's never a real, honest, passionate love story for a fat female character who actually accepts and loves herself as she is. I believe that what we see most is what we normalize, which is why it feels so remarkable and abnormal that someone like me is onscreen as a self-possessed, confident romantic lead. But the more we see that, the more we normalize it and broaden the narrative in entertainment, and ultimately in ourselves."

For Ponton, playing a role like this represented a huge opportunity. "This was also the film, the role, I'd been dreaming about playing for years," she says. "So I knew this would be an enormous step for my career and for fat body politics in entertainment, which I'm very passionate about."

Ponton can bring a certain realness to this role, and not just because she's an actor. As a plus size woman, she's had experiences with fat positive and body positive communities, and has formed some pretty great conclusions about how ideas from those spaces could apply to the film industry.

"As someone who's been varying degrees of fat for most of my life, I truly hated and rejected my body for a really long time," she writes. "I had disordered eating, a lot of bullying as a kid, and ultimately just felt very unworthy in my skin. Finding blogs and resources on size acceptance was a life-changer for me."

"[This] helped me heal my relationship with my body and myself, and I've been an active voice in the community ever since," she adds. "I truly believe that loving and accepting your body is the key to more empathy towards yourself and others."

And as for her chosen industry, Ponton wants cinema to try harder to reflect the plus size community and help it properly.

"As we open the door wider for those characters to have voices that defy stereotypes, it's vitally important to invite people of size to the same party," she says. "What if these fat characters were leads, and actually pretty happy and OK living their best lives? What if their size were literally never even discussed on the show? That would not open so many doors for actors of size, but also for people of size who long to see someone like them carry a story."

It feels like Love On The Run could be laying down the blueprints for that kind of change in cinema. After all, if one film can do it, there's no reason that others can't follow suit.

Love On The Run premiered in select theaters on Aug. 26.

More like this
What’s The Kibbe Body Type Test That’s All Over TikTok?
By Marilyn La Jeunesse
Cameron Diaz Just Recreated *That* Iconic 'There’s Something About Mary' Scene
By Rachel Mantock
The Most Gorgeous Plus-Size Looks From The Met Gala
By Dominique Norman
Lisa Marie Presley Reviewed Baz Luhrmann’s ‘Elvis’ Movie On Twitter
By Grace Wehniainen
Get Even More From Bustle — Sign Up For The Newsletter