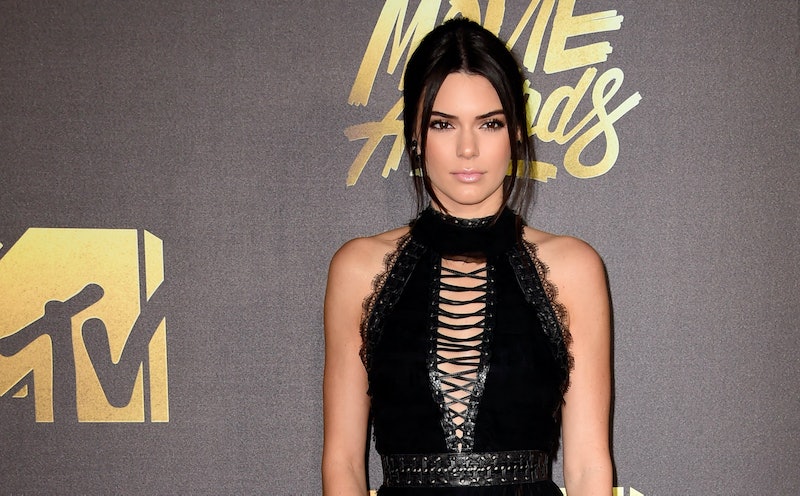 If I found out that Kendall Jenner was moving in next door — like that would ever happen — I would be totally thrilled. But unfortunately, not everybody feels that way when one of the most famous 20-year-olds in the world decides to join the neighborhood. On Wednesday night's edition of Jimmy Kimmel Live!, Jimmy Kimmel told Jenner the neighbors were mad she was moving in, and he would know, because he lives there too. Apparently, when Jenner bought Emily Blunt and John Krasinski's house earlier this summer, the other people who live there weren't too happy about what it could mean for their peaceful neighborhood.

According to Kimmel, before Jenner moved in, there was an email chain that went around between neighbors who were concerned about the chaos she might bring with her. And, as Kimmel joked, some of them even blamed him. It sounds a little rude (and not very welcoming) to me, but even Jenner herself admitted that she knew her arrival would cause a bit of an inconvenience, because how could it not?

"I know I've caused a lot of ruckus on our street," the second youngest of the Kardashian-Jenner brood said. "I have stalkers. There is a lot going on."

Well, duh — it's Kendall Jenner. There's going to be at least a little bit of ruckus. But I think her neighbors are totally wrong. I'd love for Jenner to move into my hood, and here's why.

Her House Will Never Violate The HOA

As Jenner told Kimmel, she's a neat freak — and she probably hires a lawn service, because for some reason I doubt she's out there with a weed whacker herself. You know how annoying it is when you spend precious hours outside on a weekend mowing your lawn only to deal with the person next door letting their yard turn into a jungle? Yeah, you'd never have that problem with Jenner. And she travels so much that she's probably not home a lot, which means plenty of peace and quiet.

Living next to Jenner has to be a pretty safe place to be. The second something shady happens anywhere near her house, the cops will be called, and that's a huge plus.

She Would Throw Some Pretty Sweet Parties

Could you imagine the guest list of bashes Jenner would put together? That's just good people watching. And maybe if you let her borrow a few eggs or a cup of sugar she'd invite you next time.

If Jenner moved into my neighborhood, I'd be attempting to meet her at all costs. And if we became best friends later? That's just icing on the cake.

Or Her Sisters, Possibly

Imagine this: You're bringing your groceries inside and suddenly, Kim Kardashian appears in the driveway next door. Um, sounds like a dream, right? Could be reality if Jenner was your neighbor!

She Would Probably Water Your Plants For You

She just seems like the type of person who would get your mail or check on your lilies while you're out of town. That's not a bad person to have on your block!

Jenner, if your neighbors want you out, you can totally come live with me. It might not be a mansion, but at least it's a quiet street?