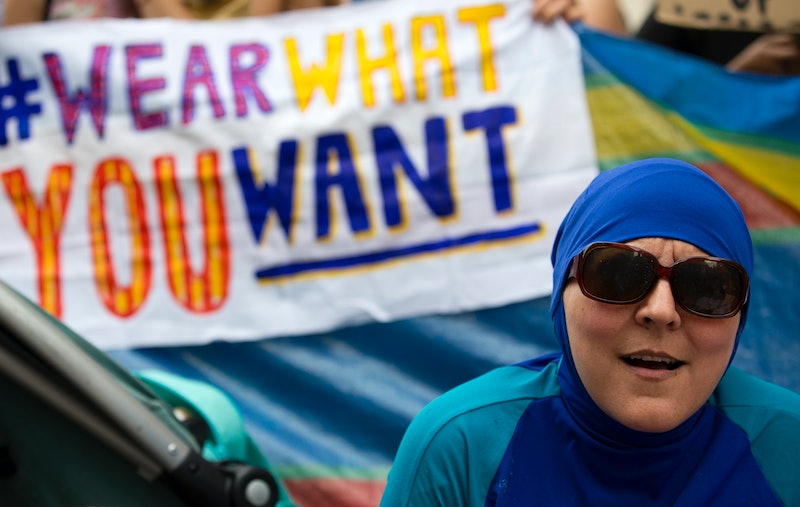 Earlier in August, local towns in France imposed a ban on the "burkini" — a full-body swimsuit conforming to Islamic modesty standards — which has galvanized a larger debate around women's bodies, choice, and secularism in France. But critics — namely, a human rights group and an anti-Islamophobia association — have voiced their strong opinions on the matter, and they are hoping to take this debate all the way to the highest administrative authority in the country. According to the BBC, a high-level French court is being asked to investigate the ban in 26 towns, as many are questioning: Is the burkini ban legal?

Images of police requesting that Muslim women in beaches disrobe have surfaced, and this has sparked shock and outrage, especially online. Fears of terrorism have reportedly been the reason for banning women from wearing burkinis in public. However, the opposing groups, The Human Rights League and the Collective Against Islamophobia in France, believe that the bans are inherently discriminatory, and have appealed to the Council of State, Fox News reported.

Essentially, the two groups believe the bans are in violation of basic rights such as freedom of dress, religious expression, and movement. The bans could also breach French constitutional principles of equality. Because of this, the question of whether this is permissible under the European Convention on Human Rights are is also a valid consideration.

When it comes to a ban like this, Stuart Karle, an adjunct professor of law at Columbia University, tells Bustle that it's worth considering two parameters: freedom of expression and the expectation of a well-ordered and safe society. "The European Human Rights Charter says everyone has a right to free expression, but that the right can be limited by concerns of safety or deliberate incitement of threat," he says.

If you look at New York state law, a person cannot walk around in public wearing a mask. That's illegal, Karle says, based on concerns of public safety. And Karle says that he questions the legitimacy of the burkini ban based on cited concerns of terrorism: "In the case of the ban, it's confusing because it's hard to reconcile the public order reasoning with the limitation. The burkini isn't the same as a suicide vest, for example, and so I question if the threat to safety is feasible enough to justify limited expression."

Ultimately, the ban is "preposterous," Karle says, in that a woman can be fined for wearing the burkini on the sand once she enters the beach, but not necessarily before or after, like when she's driving in her car.

The council is set to hold a hearing on Thursday, Aug. 25, as well as make a decision about the case within 48 hours. While the ruling in this case concerns the ban in the town of Villeneuve-Loubet, the decision is expected to be binding, as well as set a legal precedent over whether it is legally constitutional to tell a woman what she can and cannot wear to the beach. According to the BBC, the opposing organizations were unable to persuade a court in Nice earlier this week about lifting the ban at Villeneuve-Loubet, which is why they are taking it to France's most authoritative court now. An Ifop survey showed that most people in France (64 percent) are in support of the ban, while 30 percent are indifferent.

French Prime Minister Manuel Vallis vocally supported the ban on BFM televison, saying that the burkini represents "the enslavement of women" and supporting local mayors who have imposed the bans across the country. But the religious undertones of the ban, coupled with France's liberal ideology, have served to divide individuals within the country's government. Education Minister Najat Vallaud-Belkacem doesn't like the idea of the ban, and questions its intent as potentially inciting more racist sentiment: "My dream of society is a society where women are free and proud of their bodies," she said on Europe-1 radio, reported the BBC.

What sparked the burkini ban in the first place? In July, a terrorist attack killed 86 people in Nice, France, and this prompted local authorities to put the ban in place, citing it as a necessity. According to Fox News, Lionel Luca, Villeneuve-Loubet's mayor, cited the attack in Nice, which is nine miles away from his town, last month when talking about the ban.

But historically, it can be said that the ban isn't just influenced purely by fears of terrorism in the country. France prides itself on secularism, having a history of laws that are written to keep these values in place. For instance, the Nice ban was justified by the wording "Correct dress, respectful of accepted customs and secularism, as well as rules of hygiene and of safety in public bathing areas." Similarly, France banned the full-face veil in public in 2010. There is a 2004 law that forbids the display of religious symbolism in educational systems, and the 1905 constitution stresses the separation of church and state. While the constitution is built on secularism in education, it also provides for freedom of religion — but interestingly enough, the text makes no reference to clothing.

The ban in Villeneuve-Loubet is similar to the one in Nice, focusing on clothing that supposedly clashes with values of secularism, safety, and health, but like other local bans, it does not mention "burkini." In Nice, wearing the burkini is punishable with a fine of 38 euros, and the ban will remain in place until Aug. 31. Only time will tell if the higher French courts rule this ban unconstitutional and against the law.