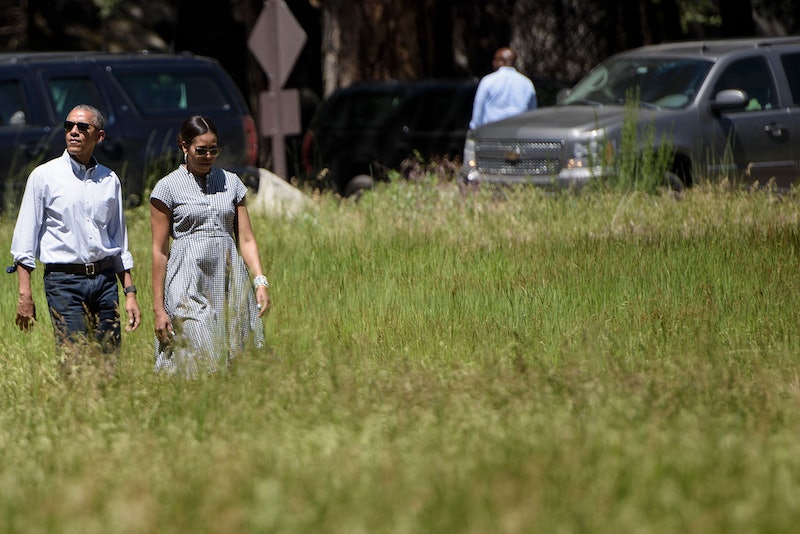 Over Father's Day weekend, the Obamas visited the national park in California, where the president gave a speech about the importance of conserving our natural resources and landmarks. He said:

There's something sacred about this place, and I suppose that's why the walls of this valley were referred to as cathedral walls, because here at Yosemite we connect not just with our own spirit, but with something greater ... You can't capture this on an iPad, or a flatscreen, or even an oil painting. You've got to come in and breathe it in here yourself.

It's true that the beauty of the landscape would probably be lost on an iPad or oil painting, which is why the 360 video of the Obama family's tour of Yosemite is actually really cool, as it takes you on a different kind of journey through the national park.

The virtual reality tour, which was collaboratively created by National Geographic, Felix & Paul Studios, and Oculus, allows people to explore Yosemite in a firsthand experience on which few people will embark, according to Oculus. The virtual reality tour is called Through the Ages: President Obama Celebrates America’s National Parks.

Take a look for yourself:

The video, which offers views of El Capitan, the Cathedral Rocks, Mariposa Grove, Yosemite Falls, the Merced River, and a time-lapse of a sunset from Glacier Point, is also the first time that a president has given the public a tour using virtual reality technology, Oculus said in an email. Félix Lajeunesse of Felix & Paul Studios told The Verge that the virtual reality experience is unique because, "When I engage with it in VR, I find it to be generally more contemplative, meditative, and I sort of enter the experience."

As the National Park Service celebrates its 100th year, it is hosting special events across the United States and is also offering free admission to all 412 of their parks from Aug. 25 through Aug. 28. Just in case the 360 experience wasn't enough — and it's amazing, but still not the same as being there in person and taking in the air, the smells, the sounds, the beautiful landscapes — take a look at some of the events being hosted by the National Park Service. Take a trip to a national park you haven't visited, or find one near you.

President Obama said in his address from Yosemite, "This park belongs to all of us, this planet belongs to all of us, it's the only one we’ve got. And we can't give lip service to that notion but then oppose the things required to protect it. On this issue, unlike a lot of issues, there's such a thing as being too late," ABC News reported. And he's right.