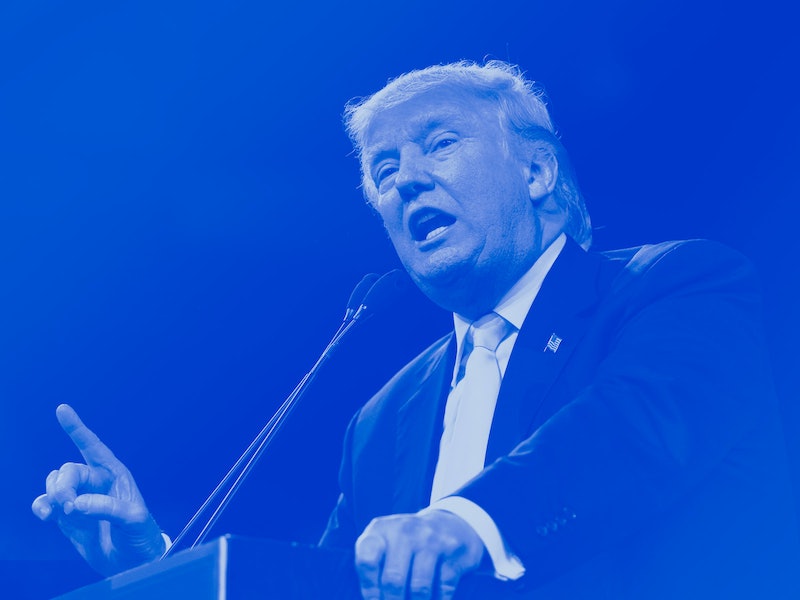 Something bizarre happened during Donald Trump's Fox News Town Hall with Sean Hannity on Tuesday night: He backed off from the most central issue of his campaign. Trump said his immigration stance may be "softening." Specifically, he said that he'd rather enforce existing laws, deporting only undocumented immigrants who are convicted of felonies. He even suggested that he'd be open to finding a way to allow those who have lived here for a long time and followed the law in other respects to stay here, provided they pay back taxes. The Republican presidential nominee said of undocumented immigrants:

They'll pay back taxes. They have to pay back taxes. There's no amnesty, as such, there's no amnesty, but we work with them. Now, everybody agrees we get the bad ones out. But when I go through and I meet thousands and thousands of people on the subject, and I've had very strong people come up to me, really great, great people come up to me. And they've said, 'Mr. Trump, I love you, but to take a person who's been here for 15 or 20 years and throw them and their family out — it's so tough, Mr. Trump.' I have it all the time! It's a very, very hard thing.

In other words, Trump is adopting a platform that is increasingly closer to the immigration plan of Jeb Bush — which Trump called weak during the primary. It's not even that far from the Delayed Action for Parents of Americans or Deferred Action of Childhood Arrivals (DACA) policies implemented by Obama.

One can certainly argue that Trump is being hypocritical. He looks like a nonsense candidate who still has no idea what he would do if he actually won, and is flopping around like a fish out of water. This proves what we always suspected: Trump's candidacy stands for nothing but his name in gold letters.

Except this also makes me so much less worried about him becoming president.

From the very beginning, I have been terrified of Trump becoming president because of his immigration policy. Forget his lack of experience or his crazy temperament — to me, the worst thing about a potential Trump presidency has always been how he said he planned on rounding up 11 million people and kicking them out of the country. His signature policy, as he sold it up until recently, involved knocking on doors and dragging people out, splitting up families, and sending people whose only true home has been America to places they once risked everything to escape.

And that doesn't seem quite as likely now.

Sure, Trump still represents all sorts of scary things. Trump could legitimize Islamophobia, encouraging religious radicals and victimizing innocents. Trump could jeopardize NATO, the most successful geopolitical alliance in history. Trump could default on the national debt and end the very basis of the world financial system while driving us headlong into a trade war with... everyone.

For a certain part of Trump's base, nothing about him matters except his plan to kick millions of people out of this country. On page three of Ann Coulter's new book In Trump We Trust, she states: "There's nothing Trump can do that won't be forgiven. Except change his immigration policies." On Wednesday, Coulter made good on that with that promise and tweeted her frustration:

Trump could still be president. There are all sorts of things that could go wrong if he did. But the single worst thing about a potential Trump presidency? The fear I had that he would turn this country into a Orwellian menace, asking neighbors to turn in their friends, detaining and deporting and doing God knows what with people who have lived here for years? Well, it feels good to know that it probably won't happen.