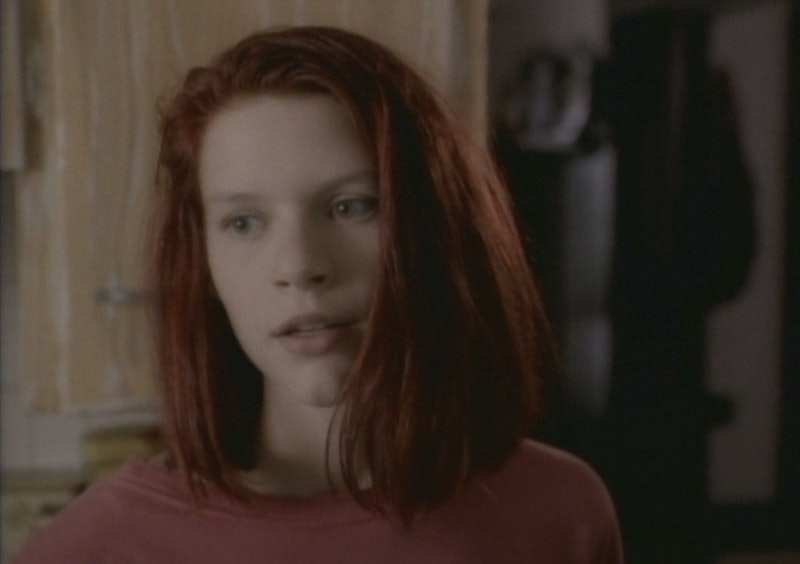 Before Claire Danes was a CIA officer with an Emmy and Jared Leto was a Joker with an Oscar, there was simply Angela Chase and Jordan Catalano. Yes, this was a magical time called 1994, when My So-Called Life (and it’s torrid teenage love story) enthralled otherwise apathetic Gen X-ers... or whatever. Though the show is now tap-dancing on 22 years old, it makes for a hell of a nostalgia piece. See, My So-Called Life captured the '90s as much as it captured the growing pains of being a 15-year-old girl. It is all shrouded in angst and ill-fitting plaid, equally.

If you need any tangible proof of this, look no further than the pilot episode. Like the show's scarlet-haired, chin-crumpling protagonist, the series was still looking to establish itself. It was setting up loyalties that would eventually come crumbling down, it was breaking bonds that would eventually be reinforced stronger than ever, and it was doing it all to a lightly alternative soundtrack that you simply can’t find these days. You know, other than at some sort of Bushwick warehouse venue.

And I think that potent nostalgia should definitely be savored. Have a taste of some of the most delightfully ‘90s things that peppered the inaugural My So-Called Life episode.

1. This Power Combo Of Flannels And Mom Jeans

They may be selling these items at your local mall these days, but let's be real, you have to be hella rebloggable to pull that off in earnest today.

It's not like there's a lack of dearth of crazy hair colors — I have a robust Pinterest Hairspiration board that validates how open-minded we've gotten about what we put on our head. At the same time, though, we live in an era of pastels, ombres, balayage... elaborate procedures that run our wallets dry. Nobody is going for concentrated slightly off-kilter colors like Angela's red, and certainly nobody is doing it from a box.

3. Angela's Dad Thinking Her Hair Color Is Going To Devolve Into A Downward Spiral Of Partying With Axl Rose

This was probably slightly outdated back then, since I feel like by the time 1994 rolled around, Kurt Cobain and grunge had beaten Axl into Nowheresville. Whatever though, I'm not following Guns and Roses' career trajectory, because it is the mid-2010s.

Leto had yet to to grow out his floppy middle-part (which is a peak '90s haircut) and that's kind of a drag. However, we are blessed with an early glimpse of the Jordan Catalano leather string choker. Chokers by and large are making a low-key comeback, although I have yet to see a man of this decade pull that look off. I'm sure the leaning helps.

Danielle gets a pass because she is a literal child while Sharon Cherski's fluffed out 'do is something that could never translate positively today, not with all the irony in the world. Oh, and for the record Angela's mother is holding that sad french braid together with, you guessed it, a scrunchie. Those things are all over this show.

6. The R.E.M. Poster Chilling In The Background

Sure, I've met some Brooklynites in their late 20's who seem like the R.E.M. poster type, but there is no teenage girl on this planet with that on her wall these days.

7. Every Shade Of Lipstick In This Show

8. A House Party Where Teenagers Are Moshing In The Yard To The Most Grunge Band Of All Time

Listen, I grew up in central Jersey. I'm not saying I haven't suffered through a bunch of Misfits cover bands playing birthdays, I'm just saying that the average teenager is more interested in turning down. For what, I don't know.

9. "I Touch Myself" By Divinyls Playing On Television

Technically that song came out in 1990, so I can only assume that it was just a regular part of MTV's rotation.

10. By Extension Of That, The Idea Of Watching A Music Video On Television

Most people our age don't even own a TV, and we all flock straight to YouTube if we want to catch a video debut (you know, after it's been flaunted and promoted on several social media fronts).

11. The Fact That These Crazy Kids Are Trying To Go To A Rave

As far as I can tell those still exist, you know, somewhere in the universe. I think raves have mutated into something else entirely. It's safe to say, however, that '90s raves were a whole different kind of monster.

12. Wrapping Up The Episode To R.E.M.'s "Everybody Hurts"

I think there's some kinda law these days about how you can only feel pain to like, Adele or something. This was clearly long before that law was put into place, and it further vouches that this show was very pro-R.E.M.

Oh, it was a simpler time. Feel free to flock over to Hulu to relive the magic of My So-Called Life, a show so beautiful, it hurts to look at it.