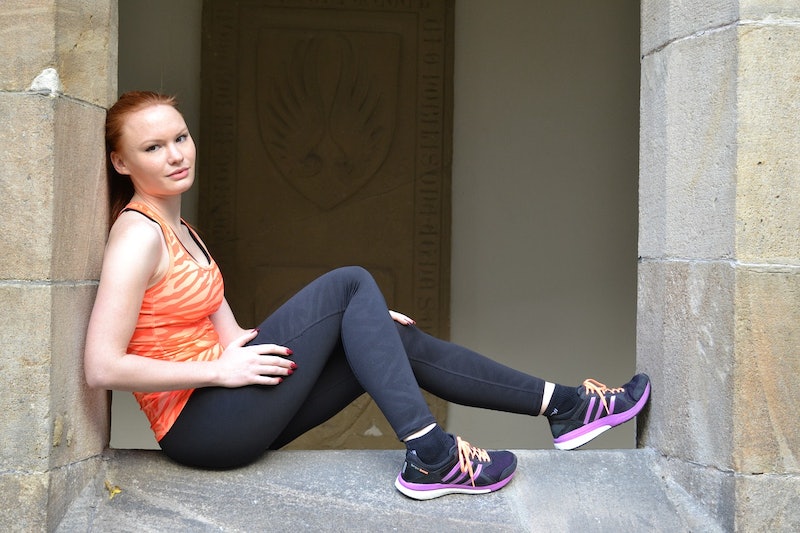 If you’re a woman and run regularly, you may have asked yourself, “How does running affect my period?” You aren’t alone. As a teenager, I started running regularly on my high school track team. I was logging more miles per week than most of my friends on the softball team — a lot more. As my weekly mileage crept upwards, my monthly visits from Aunt Flo slowed down and eventually stopped. That’s right: I started missing my monthly periods because I was running so frequently. At first, it was kind of nice not having to pack tampons on school trips or worry about ruining a new pair of underwear from a surprise visit. But after a few months, the idea of losing my menstrual cycle because of running became troubling, so I visited an OBG-YN for advice. According to a doctor, my missed periods weren’t a huge cause for concern — but she still wrote me a prescription for birth control to help regulate my period, anyway.

Missing menstrual cycles from running isn’t a new health concern, and could potentially happen to anyone who exercises frequently. And while you may absolutely loathe your “time of the month,” that doesn’t mean you aren’t concerned when you miss your periods altogether, either. To help you figure out if your missed or late period from running is a cause of concern, we asked health and running experts our biggest questions about how running affects our menstrual cycles.

1. How Does Running Affect Your Period?

According to Marra Francis, MD, an OB/GYN in San Antonio, TX, running and other exercise routines can have many affects on a woman's cycle.

“Running that causes stress on the body, usually as a result of loss of body fat but also from an overproduction of hormones such as endorphins, can cause a cycle to come less frequently or not at all,” Francis said via email. “When a woman loses her period form excessive exercise, it is called "Exercise-Induced Amenorrhea.’”

However, don't get it twisted: All exercise isn’t necessarily bad for your menstrual cycle.

“The endorphins released during exercise can help with painful cramps or discomfort felt during menstruation,” Francis says. Studies also show that exercising during the later part of your menstrual cycle burns more energy, and helps you feel less fatigued.

2. Can Running Consistently Stop Your Period From Coming?

The short answer? Yes. The longer answer is a little more complicated than that. If a woman runs consistently and experiences a change in her body fat composition, she can experience Exercise-Induced Amenorrhea, Francis explains.

“When body fat levels drop significantly, the woman's body believes it is in a state of starvation and will try to prevent a pregnancy, as trying to nourish a growing fetus would just add more stress to her body,” Francis says.

3. What Does This Mean? Is It OK To Miss A Period Every So Often?

A missed period doesn’t always mean something is indefinitely wrong -- but you don’t want to chance it.

“When a women experiences Exercise-Induced Amenorrhea, she will not have regular ovulations which can make getting pregnant difficult and can make certain types of contraception, like Natural Family Planning, impossible,” Francis says. “Additionally, women who experience amenorrhea from exercise will experience a certain degree of bone loss from being in a low estrogen state, which puts them in a high risk category for osteoporosis and broken bones. Low estrogen also increases the risk of heart attacks later in life and atrophy of the breasts and vagina.”

4. So, What Should You Do If You Suspect Running Is Interfering With Your Cycle?

Runners who are in a state of amenorrhea (or skipping or missing their periods because of increased exercise), should consult their doctor about how they can combat the negative long term changes of low estrogen, Francis says.

Potential solutions include placing women on a low-dose birth control pill to replace some of the hormones they are lacking, and Francis also recommends taking supplements, like Vitamin D and Calcium, to help minimize effects to the bones.

Women can also increase their caloric intake to offset increased exercise, Francis says. However, whatever may be going on, don't leave your situation to chance, or assume that it will work itself out. The most important and best thing you can do is let a professional OB-GYN evaluate your situation.