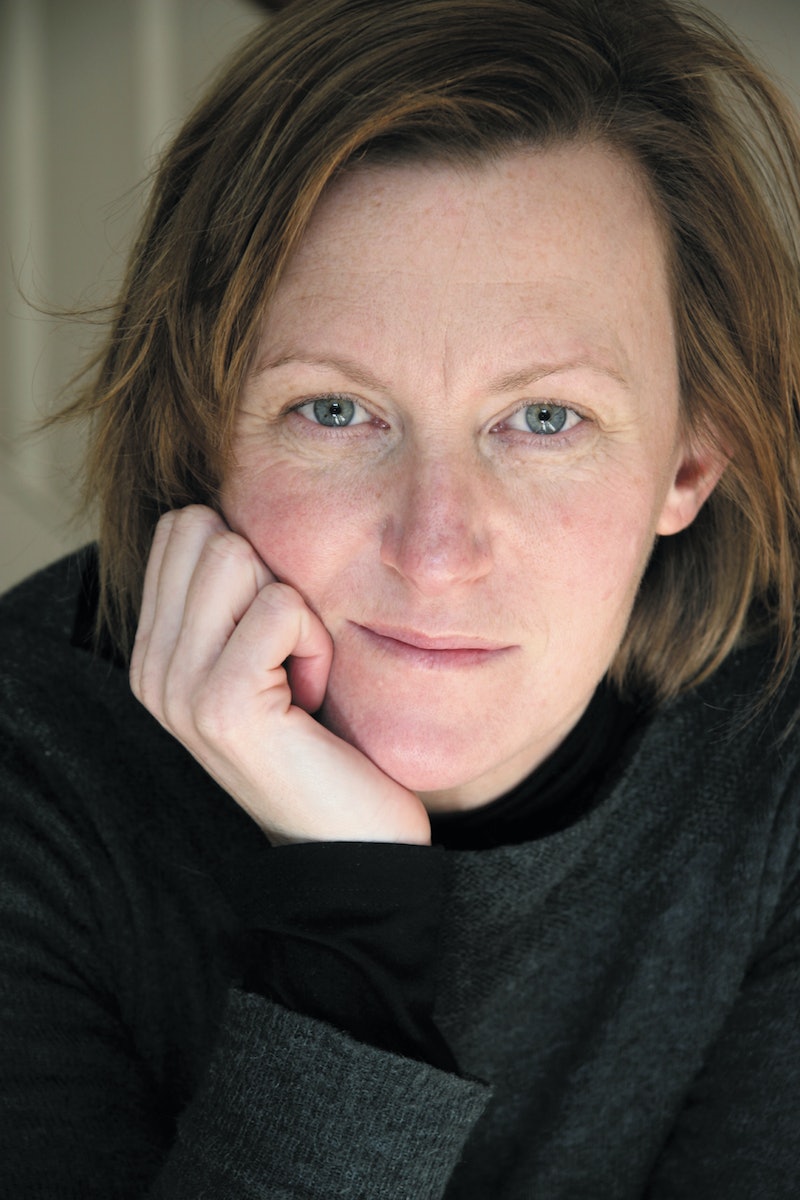 What happens when you sit down two New York Times bestselling thriller authors for a chat? You get an explosive conversation about creating tension, about character-driven dramas, and about what keeps readers turning pages long into the night. In a Bustle exclusive, Kimberly McCreight interviews Gilly Macmillan about her forthcoming novel, The Perfect Girl, out Sept. 6 from William Morrow.

The Perfect Girl centers on one perfect girl: Zoe Maisey, a teenage musical prodigy with a tragic past. As a child, Zoe made a mistake that left three classmates dead, and she and her mother have kept it a secret from their new family — Chris, her mom's new husband, and Lucas, her stepbrother. Now 17 years old, Zoe is on the path to redemption, and it begins with her piano recital, which is being held on the evening the book opens. But somehow, the night turns ugly, and by the time the clock strikes midnight, her mother is dead. The Perfect Girl is told over the course of 24 hours through multiple perspectives: Zoe narrates some chapters, but others are told from the point of view of Tessa, Zoe's aunt; Sam, Zoe's lawyer; and Richard, Tessa's husband. Through these alternating viewpoints, readers will learn the startling truth of what happened that night — and what happened all those years ago.

Kimberly McCreight — author of Reconstructing Amelia, Where They Found Her, and The Outliers — knows a thing or two about writing thrillers that keep you guessing until the very last page. She sat down with Gilly Macmillan to talk about The Perfect Girl. Read it below:

Kimberly McCreight: One of my favorite things about The Perfect Girl—and I enjoyed so much about it—is the way it’s structured. The multiple first person points of view really ratchet up the tension while simultaneously deepening our understanding of the characters. What She Knew is structured similarly. What are the benefits and challenges of writing a novel in this fashion?

Gilly Macmillan: One thing I love about reading books with multiple first person narratives is the way it allows readers to experience the action from different viewpoints. The best example of this I’ve ever read is William Faulkner’s As I Lay Dying , where almost all of the narrators are part of the same family. I wanted to use the device for The Perfect Girl to give the book a filmic feel, as if the reader is watching a movie that allows each character their moment on camera, adding, as you say, depth to what we know about them, complexity to the plot and tension to the novel as a whole.

One thing I love about reading books with multiple first person narratives is the way it allows readers to experience the action from different viewpoints.

There are some tricky challenges to face when using this technique: it’s important to keep each character’s voice distinct from the others, to make sure that each character’s narrative knits together perfectly with the others in terms of action and plot, and also to pace and balance each narrative against the others.

KM: There are certain central characters who don’t get their own POV or whose POVs are introduced later on—to very interesting effect. Can you describe how you decided which characters would be POV characters and whether or not that changed in the process of writing The Perfect Girl?

GM: The Perfect Girl is primarily Zoe’s story, so she was the first voice that I began to write. Her Aunt Tessa came next. I wanted Tessa’s voice to provide an alternative viewpoint of both past and present events from within Zoe’s family. Her reasonable, thoughtful approach is an important counterpoint to Zoe’s unfiltered narrative. I also chose to write from the point of view of Sam — Zoe’s former solicitor and Tessa’s lover — because he provides us with a yet more dispassionate view both of Zoe’s past, although he isn’t entirely emotionally detached either.

Halfway through the book I decided to bring in a new voice, that of Tessa’s husband Richard. He’s introduced at this unusually late stage because it’s the moment when he ceases to be a peripheral character and is suddenly right in the center of the action. I wasn’t sure that adding a new narrative in the middle of the story would work at first, but I went with my gut feeling that it would be the right thing to do, because I wanted to continue to tell the story right from its heart, and in the end the inclusion of Richard’s voice really unlocked the second half of the book for me.

He’s introduced at this unusually late stage because it’s the moment when he ceases to be a peripheral character and is suddenly right in the center of the action.

KM: One of the central themes of The Perfect Girl is the meaning of family—finding a family, losing a family, never being able to have a family, what family even means to begin with. Was that something you set out to explore or did it evolve—as themes are wont to do—through the process of writing the book?

GM: I often find that themes emerge as I’m writing, but in this case the theme of family was first and foremost in my mind right from the start. After what they’ve been through, the idea of creating and maintaining a ‘perfect’ family unit is such a strong driver for Zoe and her mother that I knew it would have to be the thematic backbone for the book. It intrigues me how family can have the power to both maintain and break us. It’s an emotional loose cannon at the heart of all of our lives.

It intrigues me how family can have the power to both maintain and break us. It’s an emotional loose cannon at the heart of all of our lives.

KM: How was it different writing a book centered on the story of a young person as opposed to an adult as in What She Knew? While The Perfect Girl encompasses the emotional and narrative arcs of several characters it is very much teenaged Zoe’s story.

GM: It was a big challenge! The adult character narrating What She Knew was much easier to get into at first as she, like me, is a mother so I was able to channel many of my day to day feelings and experiences into the book. However, I’ve always loved books with a strong teenage narrator. It’s such a challenging and intriguing time, when intelligence and emotional responses are so developed but you remain powerless over very significant areas of your life. When I was developing The Perfect Girl I returned to a lot of novels that I’ve loved over the years and re-read some of my favorites for inspiration ( The Catcher in the Rye , The Outsiders and The Fault in Our Stars amongst others). I also have teenage children so I consulted them, and listened to them and their friends, and tried to bring into Zoe’s voice the cleverness, imagination, freedom and sometimes wildness that can characterize teenage minds.

KM: One of the things, I admired about your novel was the way you moved back and forth through time so seamlessly—particularly to Zoe’s detention and her discussions with her therapist. These sections were simply integrated into the central narrative and yet are very much scenes in their own right. It’s extremely effective. How did you decide to deal with Zoe’s past in this way?

GM: That decision was led by Zoe’s character, and the way her mind works. She’s very smart and emotionally astute, but she’s also had some traumatic and limiting life experiences that she struggles to process, in part because she’s forced to keep them a secret. Often an observer, even when she’s at the heart of the action, she tries to absorb everything that goes on around her and her mind naturally flits from past to present as she tries to create connections that will help her to make sense of what’s happening and protect herself and her family.

KM: Your novels are both tightly plotted mysteries and character driven dramas, which comes first for you?

GM: Character always comes first, and I can’t start writing until my characters have a strong voice. Once the voice is there, and I’m happy with it, I then develop my set-up and drop the characters into it. After that I begin to work, usually as I write, on the intricacies of the plot, though I usually have a broad idea of how the book will end from the start which helps to give it direction.

Character always comes first, and I can’t start writing until my characters have a strong voice.

KM: Can you describe your writing process? Do you outline your stories in advance?

GM: My writing process is far more chaotic than I would like it to be. I often read with envy about writers who carefully outline their books before they start to write, because I find that impossible to do. As I said above, I begin with character and set-up, and I usually have a broad idea of the overall outcome of the story from the start, but then I just dive in and start writing. It’s a somewhat messy process that can lead to many false starts, and often results in large amounts of material having to be cut when I edit, but it’s the only way I seem to be able to work. What works in its favor is that it’s an intense and immersive process, which I would hope helps to create a book that’s rich, gripping, and believable.

My writing process is far more chaotic than I would like it to be. I often read with envy about writers who carefully outline their books before they start to write, because I find that impossible to do.

KM: This is your second novel in the U.S. and coming quickly on the heels of the wildly successful What She Knew, what was your road to publication like?

GM: I was lucky enough to find an agent quite quickly after submitting the first draft of What She Knew, but after that the road to publication was littered with many edits! I spent a year working on the manuscript with my agent, and once she’d secured a publisher in the UK I worked on it for another six months. I was fortunate to have both an agent and then a publisher during that long eighteen months of edits, because it kept me going, and during that time we had some exciting international sales, including to the US.

KM: What’s next for you? No pressure, but selfishly I just want to know when the next book comes out!

GM: Thank you! I’m currently working on my third novel, which is a sequel to What She Knew. It features the return of Detective Inspector Jim Clemo and a very difficult case involving two teenage boys who’ve been involved in an incident leaving one of them fighting for his life and the other unable to speak about what happened.

The Outliers by Kimberly McCreight, $11.16, Amazon